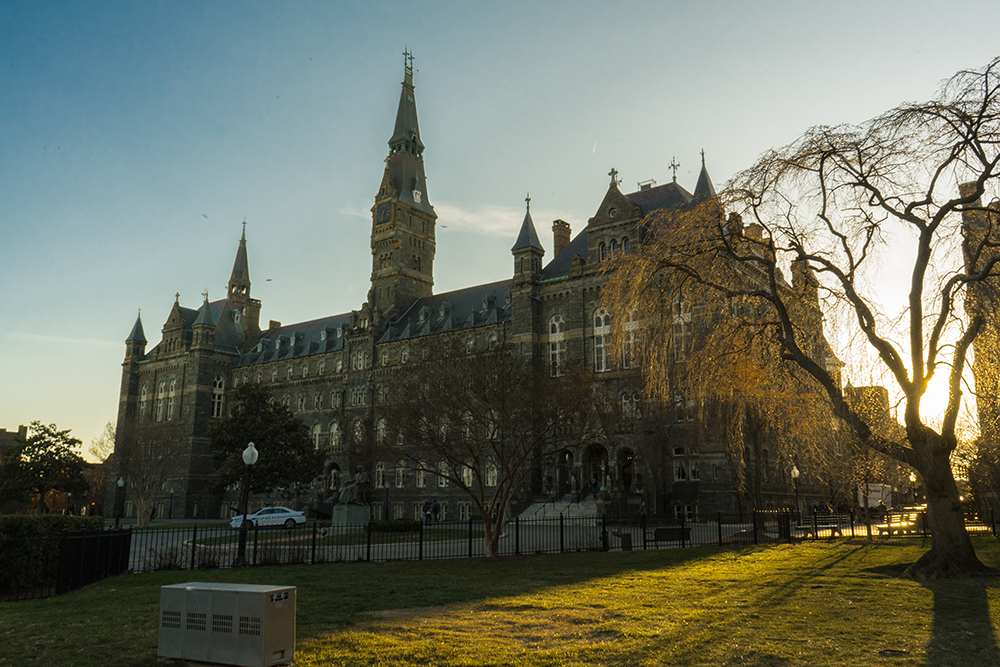 Georgetown University is set to begin faculty recruitment to launch the Institute for Racial Justice, a multidisciplinary research and advocacy organization, as part of a series of commitments the university made to racial equality.

The institute’s launch will mark the completion of University President John J. DeGioia’s commitments made in February 2016 to expand the university’s commitment to racial justice.

Georgetown is recruiting four faculty members for the institute, according to an email from the Office of the Provost sent Thursday morning.

The institute will be an outreach center to explore a range of racial inequities in health, education, income and employment, among other topics; it will bring together university scholars from Georgetown and other universities, according to the email. The university has not announced an official launch date.

On Oct. 4, 2017,  Robert Groves, provost and executive vice president, extended an invitation for proposals from departments across the university for ideas on confronting racial inequities.

The guidelines for proposals, which establish the goals each of the four new faculty members are to pursue, were based on themes established by the institute and the working group such as inequality and difference, and structures and solutions.

A university faculty committee selected four proposals from the department of health systems administration in the School of Nursing and Health Studies, the departments of performing arts and African American studies in Georgetown College, Georgetown University Law Center and the McCourt School of Public Policy to comprise the institute.

Christopher King, director of the health administration graduate program, drafted a proposal to inform Georgetown students and those outside the community about how health care systems can be made more equal.

“Our focus is making sure that the most vulnerable members of our population are cared for,” King said in an interview with The Hoya. “In a health care space, we’re teaching our students on how to be leaders with a focus on making sure that the most vulnerable individuals have access to quality health care. … We want our department to be perceived as a national leader in academia in helping health systems across the country apply racial justice lens in how they deliver care.”

In February 2016, DeGioia emphasized the need to confront the racial inequalities present in the United States, as well as on campus, at an address to the community.

“The moral imperative for complete social justice continues to summon us not to discussion but to action and that summons will not go away — we ignore social morality at our peril,” DeGioia said in his 2016 talk.

The Thursday email was written by the three executive vice presidents of the university’s main campus, Medical Center and Law Center, and it noted the university’s progress on tackling racial injustice since 2016, specifically with establishing a department of African American studies. The university also created a Working Group on Racial Justice to create a plan to address racial inequities.

“Georgetown has established a Department of African American Studies and hired three faculty members,” the email read. “Last year, we led a faculty advisory committee to solicit and review proposals—from departments across all of Georgetown’s campuses—for four faculty appointments that will be critical in the development of a new Institute for Racial Justice.”

While the faculty members have not yet been selected, all four departments chosen to head the institute have a clear vision of how to integrate racial justice within their respective concentrations.

The departments will “connect to the scores of scholars at Georgetown whose own scholarship relates to the social, economic, and health consequences of racial differences,” Groves wrote in a Sept. 12 blog post. “It will use, whenever possible, the Washington community as a partner in its work and through those partnerships solidify the University as a good citizen of the city.”

“It is crucial to keep the very public role of the humanities and the arts at the heart of our work on transformative social justice, as an acknowledgement of the long history of African American engagement with arts as activism,” the departments wrote in their post.

The McCourt School of Public Policy proposal emphasized the need to look at the intersectionality of public policy and racial injustice.

“From public classrooms, to courtrooms, to voting booths, institutions meant to upheld the American ideals of ‘free and equal’ continue to be manipulated and corrupted,” the McCourt School wrote in the post.

Similarly, the Law Center focused on the civic implications of racial injustice, and department leaders reflected on the racially biased disparities within every step of the criminal justice system.

“Too often, we are reminded that the actions of the US justice system—from law enforcement, prosecution, trial outcomes, and incarceration—tend to vary by the race of the person experiencing the system,” the Law Center wrote in the post.

King urged each scholar to use their voice to help shape the continued discussion of difficult issues on Georgetown’s campuses, such as racial inequities.

“We see this person as a key player and facilitator in discourse and stimulating synergy upon this campus with a focus on racial equity,” King said. “We see this resource as someone who can connect faculty and scholars to renowned content experts in the racial justice space. We’re also looking forward to this person informing curricula.”