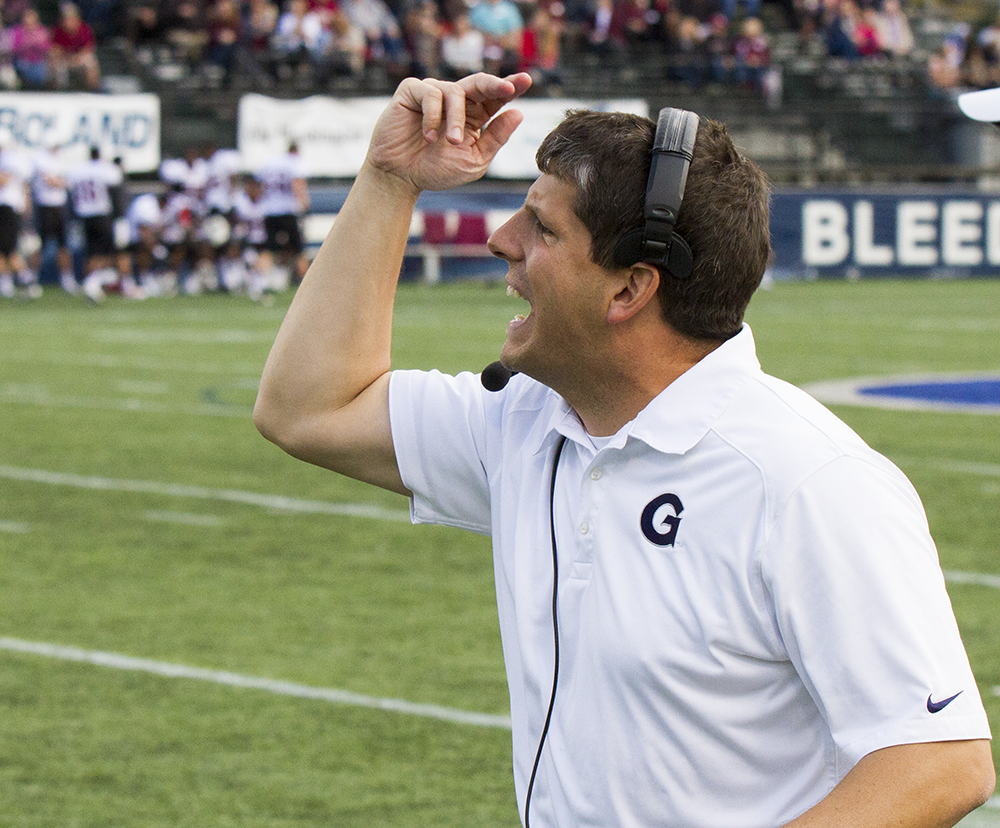 As the semester moves past its halfway point, a trio of first-year head coaches have begun to make their marks on the Hilltop. Football’s Rob Sgarlata (COL ’94, GRD ’12), field hockey’s Shannon Soares and men’s rowing’s Luke Agnini assumed their positions during their sports’ respective off seasons.

With football and field hockey both approaching the season’s end and several fall events under Agnini’s belt, the efforts taken and changes brought on by the three coaches have taken form.

Despite diverse backgrounds, a shared theme of youthful energy draws Sgarlata, Soares and Agnini together. The three all replaced established predecessors, and have approached the season with the guidance of their own principles and experience. For Sgarlata and Soares in particular, being handed the reins of programs known for their recent struggles necessitated some changes.

“I knew that when I accepted the position we would have our work cut out for us. It’s no secret that Georgetown field hockey hasn’t been very successful in the past,” Soares said. “This was going to be a situation in which we were really going to have to work to change the culture, and really get our student athletes to buy into that.”

Both the football and field hockey programs finished the 2013 season with just two wins. For Soares, this type of struggle called for cultural change, an emphasis on a process starting at the roots.

“We’re doing things the complete opposite as to what has been done before,” Soares said. “We wanted to really have them embrace that this is an exciting time and what a great opportunity for this program to grow and develop into what they want it to be.”

An emphasis on core values has become central to the program, with a similar philosophy guiding Sgarlata, and understood by athletes on both teams.

“He does a great job developing the players, the whole person, not just as a football player,” senior linebacker and defensive co-captain Nick Alfieri said. “He’s got a whole four-for-40 motto, four years at Georgetown sets you up for 40 years of the rest of your life.”

Soares brings experience from a variety of positions around the country, including Virginia Commonwealth University and, most recently, a stint at the University of Washington.

Soares replaced Tiffany Hubbard, who after seven seasons on the Hilltop, joined the staff of the Ohio Bobcats as an associate head coach in the offseason.
Sgarlata arrived at his position after more than 20 years on the Hilltop as a student, athlete and defensive coordinator. This prior experience at Georgetown resulted in an ability to provide a uniquely Georgetown experience for his athletes.

“For me, it was really exciting to take over a program and start implementing some of the things I think are important for a college experience,” Sgarlata said. “It was definitely a goal of mine to be a coach here.”

Alfieri spoke of the value Sgarlata gives to academics and experiences off the field building connections on the Hilltop, expressed through ideas like his “four-for-40” motto. But a passion for the sport is also clearly present.

“Coach Sgarlata bleeds Georgetown football,” Alfieri said. “He just brings a whole new level of energy to the program and now that he’s at the top it just kind of trickles down into every aspect of the program.”

Sgarlata took over from Kevin Kelly, who left Georgetown after eight years at the helm to become the defensive coordinator for FBS program Ball State.
Agnini is transferring seven years of associate head coaching experience at University of California, Berkeley, home to one of the nation’s premier rowing programs, to a less-proven program thousands of miles away. As fall workouts continue, Agnini has attempted to meld some of that expertise with his new surroundings in Washington, D.C.

“We actually have been running in front of the Lincoln Memorial, which is awesome, much cooler than a soccer stadium,” Agnini said. “And the Potomac is a great body of water.”

For now, Agnini plans to apply experience in intensive recruiting to benefit the program in the long term, while more immediately trying to keep up workout variety and avoid monotony, recognizing the potential rut a team could lapse into, and the importance of day-to-day activity.

“It’s a long season of training, and training hard, and they can’t just row and be on the rowing machines,” Agnini said. “You’ve got to mix it up a little bit, so I feel like I had my ways to do it in California. Here [it’s] just a little bit different.”

Agnini assumed the role of Tony Johnson, who retired after 28 years at the head of the program.

As the programs’ seasons stand now, the changes in coaching style have resulted in moderate improvements on the field of play. Field Hockey’s record stands at 5-11, and football is 2-6. Meanwhile, crew has continued its recent success, rowing well against tough competition in the abridged fall season.

Despite this lack of marked first-year improvement, subtle adjustments have engaged athletes, by and large leaving a positive mark mutually appreciated by students and coaches.

“I think a lot of our student-athletes have bought into [the process], they believe in that,” Soares said. “When you get into the thick of the season and the real rhythm of the season it can be hard to remember that process and believe in it, so sometimes we have to remind us of that.”

How these processes manifest themselves in results for the program remain to be seen, but the opportunity for improvement is present in the minds of those involved.