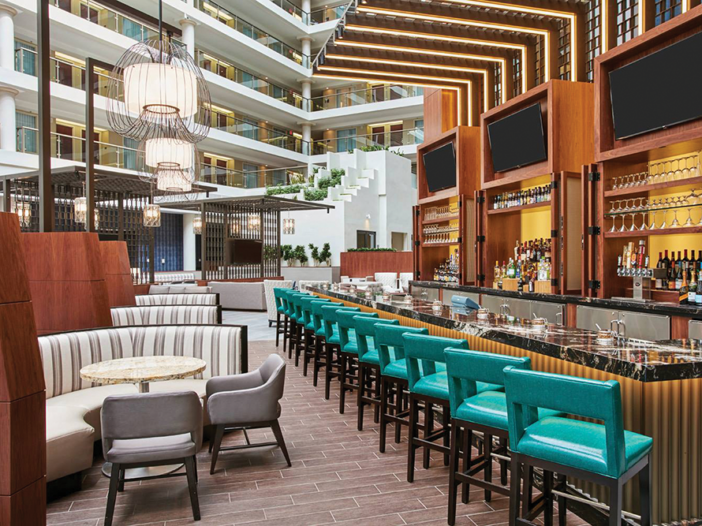 After Georgetown University opted not to invite first-year students to campus in the 2020-21 school year, many first-years moved into D.C. hotels to recreate the dorm experience.

While Georgetown originally announced it planned to welcome all first-year students to campus for the fall semester, the decision was reversed in July. Instead, the university offered application-based housing for students in unstable or unsafe housing situations. In addition to the application-based housing, Georgetown offered to host an additional 500 seniors on campus for the spring semester.

Students from D.C.-area universities made up 30 to 40% of occupants at the Homewood Suites by Hilton Arlington Rosslyn Key Bridge, according to Lilibeth Suico, director of sales at the hotel.

“It’s like a mini university in a hotel setting,” Suico said in a phone interview with The Hoya. “We tried to build a community here at the hotel where we were still mindful of the CDC guidelines, but it gives them the chance to recognize and see each other.”

The number of fellow students at The Georgetown Suites, an all-suites hotel that closed in Nov. 2020, was a pleasant surprise, according to Margherita Ceccagnoli (MSB ’24), who lived in the hotel with a roommate during the fall semester.

“You go take out the trash at the end of the hall, and you run into someone,” Ceccagnoli said in a phone interview with The Hoya. “It was kind of nice to be like ‘Oh hey!’ and eventually you do become friends with them, obviously, because you’re just, like, trying to make new friends. So I really appreciated that part of it.”

Although she feared living in a hotel might be a bit isolating, Ceccagnoli was happy to find a strong sense of community.

“I mean, if people heard that you were from the Suites or something, and some people called it ‘The Hotel’ because it’s the Georgetown one, it automatically was like ‘Oh my god! We need to be friends,’ because you basically live together,” she said.

In the fall, the Homewood Suites hosted a socially distanced welcome gathering to facilitate relationships with hotel staff and fellow student residents, according to Suico.

“They get a feel of safety, a feeling also of family, a feeling of home, and then they get to meet other students,” Suico said. “We tried to also allocate certain floors for the students, so at least they feel like, you know, they feel like this is a student floor so they get to see each other a little more often because they’re just a few doors apart.”

The COVID-19 pandemic hit the hospitality industry particularly hard, leaving hotels like the Homewood Suites grateful for student residents, according to Suico.

“I would say about 75% of our staff got furloughed because of the pandemic,” Suico said. “This allowed us to bring back some of our staff. In particular, the housekeepers and food and beverage servers, you know, because we have to do breakfast because it’s part of our rate — breakfast is included. So it was very, very welcome.”

“I did rearrange,” Ceccagnoli said. “We rearranged a lot of the apartment. Like my room for example, it was pretty boring, obviously, just like a hotel room. So I took down all of the ugly paintings and pictures, so I was able to rearrange it and tried to make it as cozy as possible.”

While hotel life might have felt like living in a dorm at times, stricter rules mandated by the hotel management still applied, according to Bo Ziegler (NHS ’24), who lived at The Georgetown Suites.

“There were extra rules that could be enforced by the hotel like noise-level curfews, and we had to very much stay well below the people-per-room limit that D.C. is enforcing,” Ziegler said in a phone interview with The Hoya.

Despite the disappointment of not living on campus, staying at the hotel provided for a positive experience overall, according to Ceccagnoli.

“I’m super thankful that I was even able to come out here and do this — basically live in a dorm-like feeling,” Ceccagnoli said. “It was fun to just be independent. Like if I think about me being at home with my parents … you know, this is just like such a better option. So basically even though it was horrible that we weren’t on campus, I wouldn’t really trade it because I made really good friendships regardless.”