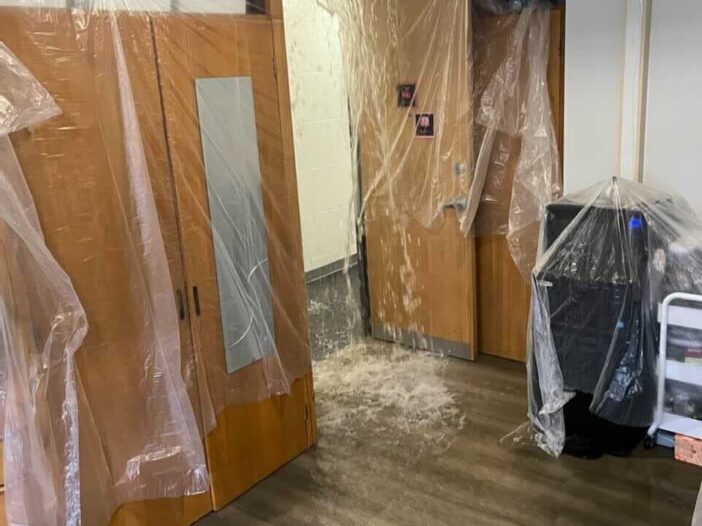 When Samantha Deutsch (SFS ’25) returned to campus after winter break, she found water gushing from the ceiling of her Harbin residence hall.

“As I was walking toward the room, I noticed that there was water on the floor,” Deutsch said in an interview with The Hoya. “Water had flooded in through the ceiling, from the sprinkler pipes, into my room and the three surrounding rooms. In fact, two of the rooms were much worse than mine.”

Over the past six weeks two flooding incidents recently occurred in Harbin and Copley Hall — both of which are first-year residence halls. The first incident occurred in Copley on Dec. 18, one day after the end of the fall semester. The other occurred in Harbin on Jan. 11. The university’s responses and handling of these incidents have sparked frustrations from students who complain the university did not leave rooms in livable conditions or adequately communicate about repairs made to affected rooms.

The damage in Harbin that affected Deutsch went unresolved for multiple days; after spending the night at a friend’s apartment, Deutsch said she found that there were still damages to her room when she returned the next day.

“When I came back into the room, it was very wet. It was really humid. So there was water dripping from the ceiling, and my windows were all fogged up,” Deutsch said.

Deutsch also said some of her belongings, including shoes and clothing, were destroyed by water damage.

Damage made to sprinklers during repairs caused flooding isolated to the four Harbin rooms, according to a university spokesperson.

Carolina Permuy (SFS ’25), whose Harbin room was affected during the same incident, said the water from the sprinklers was brown and discolored her bedding.

“I’ve washed it three different times, it was white and now it’s brown, so I’m using that for now because it’s technically clean, but it’s just kind of gross,” Permuy said in an interview with The Hoya.

Students should report property damages to the Office of Risk Management, according to an email sent to affected students from Krista Haxton, the Director of Housing Operations.

Lucy Cullen (COL ’25), Permuy’s roommate, said her room was unlivable even after  maintenance personnel vacuumed up the water..

“The first night when we got an email from Residential Living, they said that facilities said that our room was livable like we could stay in our rooms at night, which was completely false, there was no way we would be able to stay in a room with no bedding and it was just so gross and musty,” Cullen said in an interview with The Hoya.

Although there are no existing damages, the roommates are nervous that mold growth could develop due to the water, according to Cullen. Additionally, the roommates had to repeatedly ask the university for a fan and dehumidifier for the room, Cullen said.

Due to the incident dehumidifiers and dryers were placed in hallways and affected rooms to help mitigate damages, according to the email.

The incident coinciding with the start of the spring semester created unnecessary stress, according to Cullen.

Simon Mulrooney (COL ’25) said his Copley room flooded two days before the start of the winter break after the toilet malfunctioned.

“I’m not sure exactly what the issue was, but the toilet flushed continuously and so it would spill some of the excess water that was pouring into the toilet bowl out of the side for about 20 minutes which basically got water all over both rooms,” Mulrooney said in an interview with The Hoya.

An overloaded toilet, which was reported to Work Management in Facilities Operations, caused the flooding in Copley, according to the spokesperson.

After the flooding, which left about a centimeter of water on the floor of the doom, the roommates were moved to temporary housing in the Georgetown University Hotel, according to Mulrooney. University maintenance made repairs to the room and there is no outstanding damage to the room, Mulrooney said.

All impacted students were moved to the hotel, according to the spokesperson.

Caroline Fleming (SFS ’25), who lives on the Copley floor below Mulrooney, said as a result of the incident water began pouring from a light in her bathroom ceiling.

Fleming said she immediately called maintenance to assess the situation. However, when Fleming and her roommate returned from winter break, they discovered their room and belongings had been damaged, including their bathroom light which was filled with water, according to Molly Evanko (MSB ’25), Flemming’s roommate.

“My stuff was all over the place. There’s dust all over my room, and I have allergies. There was paint all over the floor too,” Evanko said. “It was kind of overwhelming.”

The university is committed to providing safe living spaces for students, according to the spokesperson.

“Georgetown University strives to provide safe and comfortable living spaces for all students living on campus. Despite routine maintenance managed by the Facilities Operations team, we still experience issues and respond as they are reported,” the spokesperson wrote.

The university has not informed the roommates of the source of the flooding or offered to pay for damaged property, according to Flemming.

Evanko said the university should have informed her on the repairs made.

“I kind of feel like when the University comes into your room, especially when they move things or do major work, I feel like there should be some kind of report that gets sent out by facilities,” Evanko said. “It’s my own personal space.”