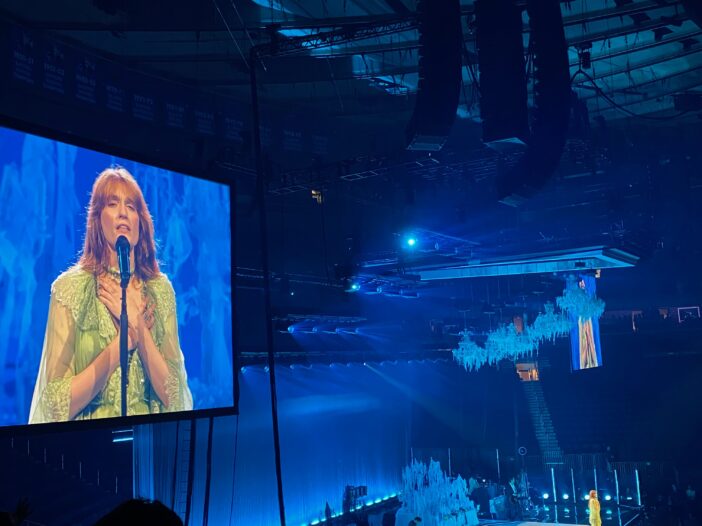 Against a background of white streamers, old-fashioned candle sticks and black curtains, Welch brought listeners a night of whimsy, strength and compassion through the depth of her voice and relatability of her stories. Her poetic lyrics, candid relatability and divine performance gave audiences a night to remember forever.

Welch instantly demonstrated the power of her vocals with the opener “Heaven is Here.” Welch sounded as rich and clear as she does in her studio recording; even casual Florence + the Machine fans were surely stunned by the eloquence of Welch’s voice. While “Heaven is Here” and her next song “King” shrouded the arena in a dark atmosphere, Welch made sure to showcase the versatility of her music with songs that displayed a variety of emotions.

In “Ship to Wreck,” Welch, who struggled for many years with alcohol abuse, sought to  destigmatize mental health issues to her audience as she sang about her struggles with addiction.

Welch continued to reveal her vulnerability in “Free,” musing about her struggles with anxiety. She sang the line: “It picks me up, puts me down,” with intense confidence and elation, prompting the crowd to move their arms up and down through the chorus. Her openness about anxiety caused some audience members to cry, leading Welch to walk to the standing audience to console fans. Adorned in flower crowns and antique-themed clothing, these fans were waiting with open arms.

Strangely enough, Welch’s most popular song “Dog Days Are Over” graced the audience early in the set list, causing the arena to shake as she insisted the crowd jump to the beat. Welch’s dancing was stunning; she flew across the stage barefoot the entire concert, bringing such a youthful and freeing energy to the crowd.

At one moment, Welch’s voice embodied the spirit of a young girl running through a field of flowers. At others, she filled the arena with a sensual ambience. Her songs “Daffodil” and “Big God,” which she exclusively sang behind large lacy black curtains, exquisitely captured the depth of her voice. Welch’s music can range from serene to euphoric, and the variety of her performance environments reflected this.

“Cassandra” and “Morning Elvis” hampered the crowd’s spirits, as Welch sang about her feelings of isolation during the COVID-19 pandemic and her inability to perform on stage. Welch’s humility and excitement as she ran through the crowd during multiple pieces expressed how deeply she loves her fans. She sang the entirety of the song “June” in the front row of general admission, holding the hand of one particularly lucky fan.

When she was not singing, Welch encouraged her fans to donate to Choose Love, an organization that provides medical aid, food, shelter, clothes, legal support and mental health services to refugees and people who are displaced.

Welch’s songs “Cosmic Love” and “My Love” echoed the idea of loving and caring for others, expressing the strangeness of falling in and out of relationships. While equally brilliant, these songs were nowhere near as moving as “Never Let Me Go.”

“Never Let Me Go,” which details Welch’s struggle with alcoholism as a lyrical epiphany, truly took everyone’s breath away. Welch strictly confined her performance to center stage, pouring out her soul and story in the process. As Welch sang, “I’m not giving up / I’m just giving in,” those same words echoed from the audience.

Although she ended the concert with two upbeat songs, “Never Let Me Go” was the focal point of Welch as an artist, musician and human. Songs like “Never Let Me Go” are what makes Welch unique; it would have been an excellent closer.

Florence + the Machine’s ability to enrapture audiences with unique sounds and relatable stories is what makes its music extraordinary, and the audience undoubtedly felt the same as the lights dimmed.