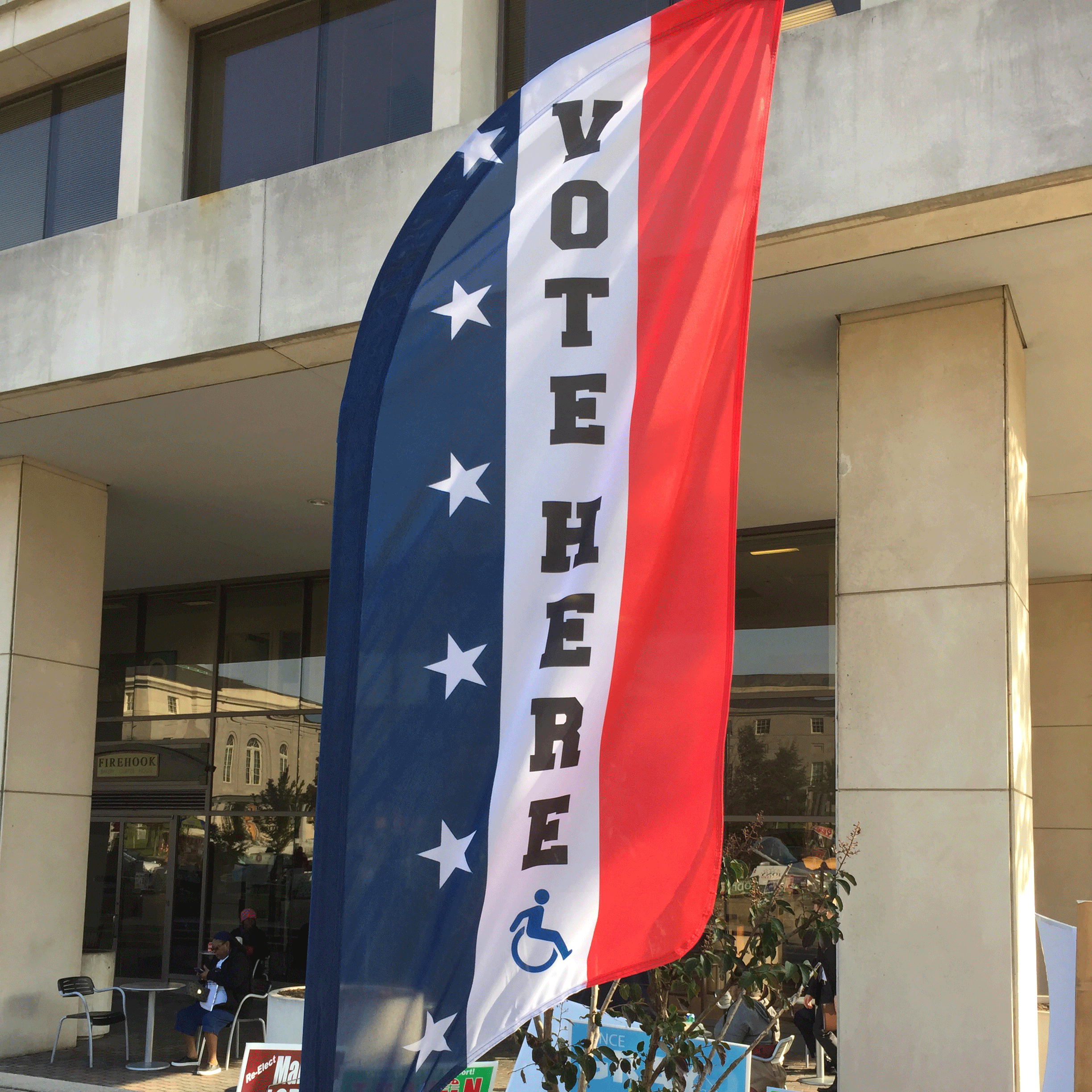 Even as the results of the 2016 presidential election remain mired in uncertainty, Bethan Saunders (SFS ’17) has known her exhaustive Election Day schedule well in advance of Nov. 8.

As a co-founder of student-led voter mobilization initiative GU Votes, Saunders plans to lead scores of Georgetown students to the polling station at the Georgetown Public Library on R Street NW today after casting her own ballot. Later, she hopes to visit the offices of POLITICO Magazine with the Georgetown Institute for Politics and Public Service, spearhead a photo campaign at the Healey Family Student Center and conclude the day with a celebratory run to the White House after the election’s winner is announced.

A Political Agenda
Saunders’ schedule represents just a sampling of the programming planned for Georgetown’s Election Day, a collaborative effort between GU Politics and student organizations including GU Votes, GU College Democrats, GU College Republicans, the Georgetown Program Board and the Georgetown University Student Association, among others. Other events include election trivia, prediction competitions, panel discussions and watch parties in the hours leading up to the election’s results.

This marks the first presidential election for GU Politics since the institute first launched in the McCourt School of Public Policy last fall. The institute has spent six weeks strategizing today’s agenda.

The programming runs from 7 a.m. until past 2 a.m., depending on when the election is called for either Republican nominee Donald Trump or Democratic nominee Hillary Clinton.

Saunders, who helped GU Votes surpass the goal established by the organization’s #1000GUVotes campaign by registering over 1,600 Georgetown students to vote, said Election Day represents a culmination of months of political fervor building up on campus.

GUCD Chair Mattie Haag (COL ’18) said her group’s efforts to politically mobilize both Georgetown students and others in the community culminated in a field trip to Philadelphia in which over 100 students were bused for a weekend trip to register voters and canvas for Clinton’s campaign.

“We have been having groups go out to Philadelphia and other areas in Pennsylvania because it’s just such a contested state in this election. Students have been canvassing almost every weekend since the start of the semester,” Haag said. “Last weekend, we had our huge Get Out the Vote Weekend, coordinated with the campaign.”

Ricardo Mondolfi (SFS ’19) participated in the Get Out the Vote Weekend, an effort sponsored by Clinton’s campaign that encouraged prospective voters to cast their ballots. Despite the Clinton campaign’s influence, Mondolfi maintained the initiative focuses less on partisan politics and more on encouraging all to vote.

“It’s less partisan than you think it is. All we want to do is make sure people are ready to vote and that they actually do exercise their constitutional right,” Mondolfi said.

Playing it Safe
Despite the excitement, Election Day on campus is accompanied by an undercurrent of anxiety by those who worry the results of the election may induce violence or psychological duress in students.

GUSA President Enushe Khan (MSB ’17) cited last week’s incident involving the circulation of a “Frito Bandito Party” with quotes misattributed to Trump as evidence that the campus risks offensive politically charged rhetoric following the election. Khan said GUSA’s Free Speech Forum on Nov. 17 will serve as a reconciliatory tool after the fallout from the election.

“I think when we talk about any divisions that this election has or may potentially create within our student body, a lot of it is pertaining to speech and the rhetoric that is harmful to certain communities on campus,” Khan said. “The flyer last week was an example where the election rhetoric was harmful and attacked specific identities in an attempt to create some sort of divisiveness on our campus.”

Although Georgetown University Police Department Chief Jay Gruber said he was unable to disclose GUPD’s security plans for the election, there will be an increase of staff Tuesday to monitor activity on campus, a measure not taken in previous elections.

Gruber warned students to avoid areas where political tensions run the risk of violence.
“If you do encounter protests, or hear about protests, be sure to avoid the area, and consider not participating in any protests,” Gruber wrote in an email to The Hoya.

Professor of international relations Marilyn McMorrow, who organized a discussion Nov. 2 working with students on strategies to respond nonviolently to potential post-election violence, said she has particular concerns about the fallout following this year’s election.

“I have never been so worried about the aftermath of an election before in my life,” McMorrow said. “I organized this whole thing as a commitment to non-violence and a commitment to bipartisan support for the ballot, for the principles of democracy through ballots, not swords. If we are anxious, sometimes it helps to have a plan.”

A Divided Campus
Basanth Sadasivan (SFS ’20), a Trump supporter, said he has encountered hostility on campus because of his political beliefs.

“There were so many situations where some things got a little bit out of control, like I would find some not-so-nice stuff left outside of my room door. Some people were obviously not too friendly with me because of my political beliefs,” Sadasivan said. “My biggest challenge about being a Trump supporter is that so many stereotypes get associated with you as a result.”

Khan said although GUSA normally abstains from federal politics aside from its lobbying branch the Federal and D.C. Relations Committee, GUSA has collaborated with Vice President for Student Affairs Todd Olson to ensure Counseling and Psychiatric Services is available on-call after hours Tuesday for students who need to access the service as a result of the election.

“Stress or trauma may potentially take over students as a result of the election, so it’s important they are aware they have resources to help them if they need,” Khan said. “As GUSA, it’s our role to make sure that there are resources available for students who may feel the need to do something after the results, or in that evening.”

GU Politics Chief of Staff Hanna Hope said in addition to working with Georgetown’s leading political organizations, Election Day provided the opportunity for the institute to partner with nonpolitical student groups such as Georgetown’s yoga club Hoyasana, which will offer sessions to help students relax amid Election Day anxiety, and Georgetown Running Club, which will sponsor a 2 a.m. run to the White House.

Hope pointed to the political activity already present on campus as a means of providing a unique opportunity to further involve the community on Election Day.

“I feel like so many students who come to Georgetown come for the political community and we’re so excited to have the opportunity to be the kind of conveners of political activity on a day like this,” Hope said. “It really creates this sense of community and family for the campus.”