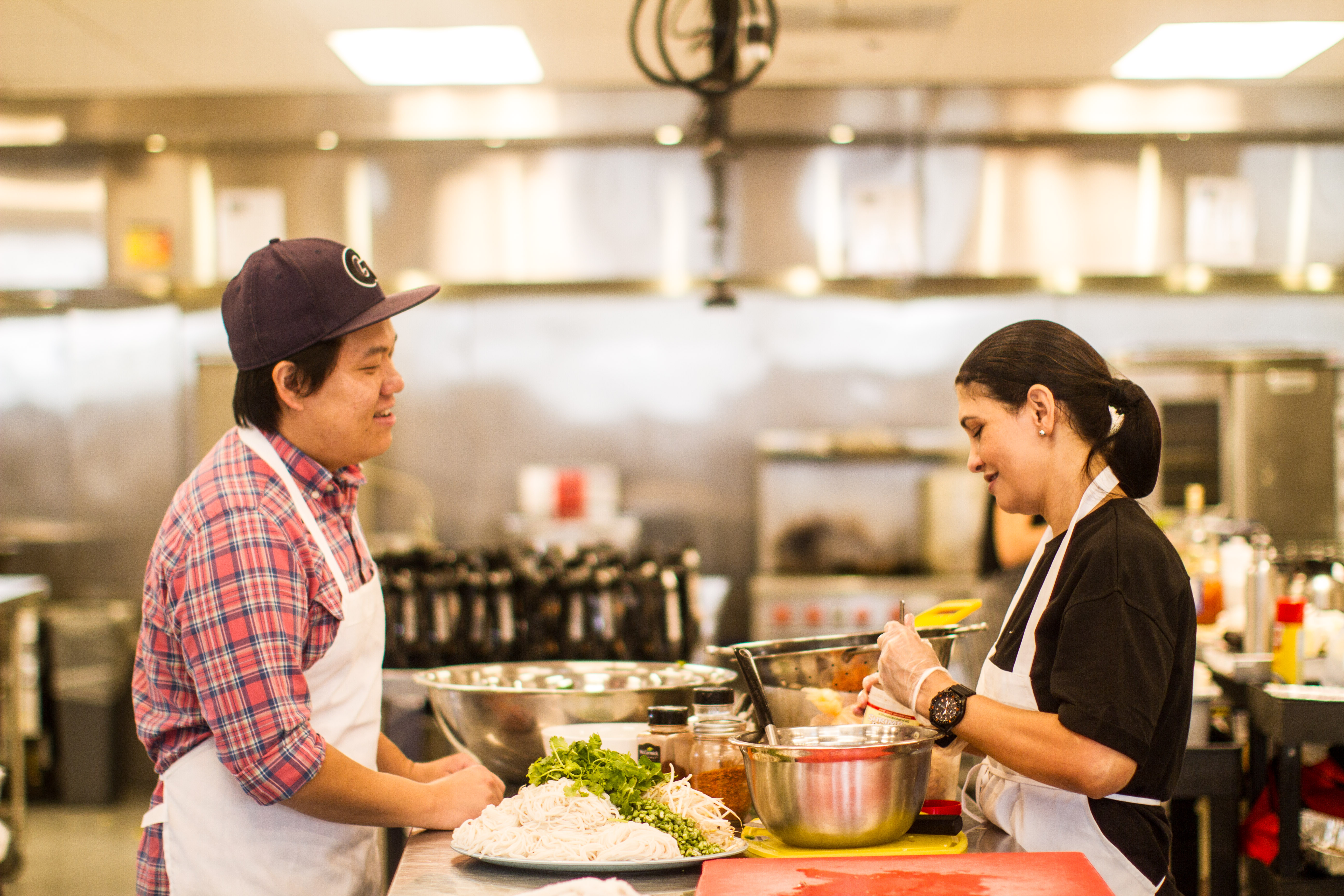 When Noobtsaa Philip Vang (GRD ’16) moved to Washington, D.C., from Minnesota for his MBA program at Georgetown in 2014, he found himself craving his mother’s home-cooked meals. But as a Hmong-American, Vang had trouble finding anything resembling his family’s cuisine in the District’s restaurants.

According to the 2010 census, D.C. has the sixth-largest Asian-American population in the United States. However, Vang said the restaurant scene did not fairly represent that demographic.

“I thought, ‘Why am I not able to right now, go down the street and find somebody who’s maybe Southeast Asian or has foods that are similar to my upbringing — find an aunty or grandma who’s making up some food and buy some food from them?’” Vang said.

Inspired by this idea, Vang recognized the potential for a food-sharing business that would empower immigrants to offer their cuisine to customers wanting a taste of food from back home or desiring a new culinary experience. Vang developed the idea in business classes. Last week, he launched Foodhini, a startup that connects customers in the D.C. area to home-cooked meals made by an emerging immigrant chef.

Customers are able to pre-order a family-style meal of Laotian cuisine made for two people. The food is ordered a few days in advance of the meal and costs $39, which includes tip and delivery.

Around 75 meals were pre-ordered during three pilot tests, including dozens more meals prepared for food-tasting events, according to Vang.

Foodhini’s first featured chef is Melissa Frabotta, a 40-year-old woman who was born in the United States but grew up in Southeast Asia. While living in Laos, Frabotta gained experience preparing Laotian cuisine. As a mother of three, she finessed her culinary skills after moving back to the United States.

Vang hopes for his business to simultaneously provide an outlet for immigrants to share their culturethrough food and make the D.C. restaurant scene more diverse. The company plans on bringing in more featured chefs by working with organizations already active in ethnic communities.

“We want to partner with organizations like CASA de Maryland and other organizations working on workforce development for immigrant communities,” Vang said. “They’re building that pipeline of people who are really wanting jobs, people who are coming from marginalized communities. They have these skills, but it’s just really hard for them to be able to join the labor market.”

Hiring featured chefs has proven to be one of the more difficult challenges for Vang’s startup. Before the company had undergone trial phases, attracting chefs from immigrant communities became a nearly impossible task since Foodhini could not offer immediate steady work. Vang recalled one instance in which a candidate was being interviewed for a featured chef position and was told the work would begin in about a month. He replied, “Well, I need a job right now.”

Since the first round of hiring a featured chef, Vang said his company has streamlined the hiring and onboarding process so that future chefs do not have to undergo prolonged lengths of time before starting work. Such lapses in work can mean a significant hit in income for some immigrants.

In June, Vang was selected as a fellow by the D.C.-based Halcyon Incubator, which focuses on providing mentorship and resources for social entrepreneurs. The 18-month program, which has assisted other Georgetown startups such as MISFIT Juicery, has so far proved invaluable in allowing Foodhini to take risks that might not have been otherwise possible, Vang said.

The first five months of the Halcyon program are spent in residency at the Halcyon Incubator, located near the university on Prospect Street. Vang’s main goal during this phase of his fellowship has been to increase sales and see if there is enough market demand for Foodhini’s product.

“I think if this thing’s going to work, we need people to show us that they really want it and that means they’re buying it,” Vang said.

“Phil himself was incredibly impressive, you know, not just in his background,” Ross said. “It’s his vision, his passion, his energy and the deep level of thinking he has done and how he’s approaching his venture. And I think that’s reflected in Foodhini.”

Though Vang is currently bootstrapping his company — supporting it with his own savings — he said he hopes to look to other external investment opportunities in the near future once the business gets off the ground.

Until then, Vang said he is focused on meeting his company’s goal of providing a social good to immigrant community.

“What really drove me to work on this was the social impact and being able to empower communities, much like I’m really familiar with where my mom and where I am from,” Vang said. “That’s why I really can’t see myself working on anything else right now. It is something that services a need in our communities.

“I think it’s always good to offer more opportunities to people who might not have them otherwise,” Talati said. “It sounds like a program that really deserves a lot of investment and could grow into something really great, and I would love to support it.”