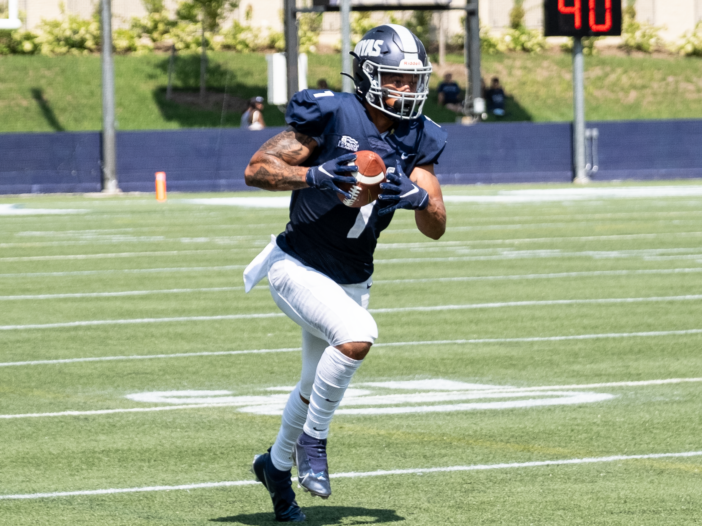 Fresh off a disappointing 44-9 loss to the Harvard Crimson on Sept. 18, Georgetown football fell to another Ivy League team Saturday afternoon. In a game characterized by heavy offensive firepower and little defensive resistance, the Hoyas proved unable to defend their 24-10 2019 Lou Little Cup title, as the trophy now travels northward to New York’s Columbia Lions (2-0).

The Georgetown Hoyas (1-2) kicked the game off with excitement, coming away with a fiery forced turnover on Columbia’s first drive. Senior defensive back Delano Salgado punched out the football, allowing first-year defensive lineman VeRon Garrison to shift the early momentum with his fumble recovery at midfield.

From there, the Hoyas turned to junior quarterback Pierce Holley to bring them success. Following fifth-year quarterback Joseph Brunell’s injury in the team’s loss to Harvard, Holley got his first-ever start as a Hoya and completed his first career pass to senior wide receiver Joshua Tomas.

The Lions, however, were the first to sustain a drive, with quarterback Joe Green tossing a 46-yard completion into the red zone. Columbia took an early 7-0 lead with a touchdown by running back Ty’son Edwards.

Following Edwards’ touchdown, the Lions never gave up the lead. The first quarter saw a gutting 63-yard run by Columbia running back Dante Miller, followed by a 6-yard score from the Lions’ mobile quarterback Ty Lenhart.

The Hoyas finally gave themselves a chance to answer at the tail end of the quarter when Holley threw a 35-yard deep ball to senior tight end Liam McHale. Georgetown got on the board with a dominant rush by standout junior running back Joshua Stakely, cutting the deficit in half with a commanding 10-play, 76-yard drive.

Columbia did not hesitate to answer. Lions defensive back Will Allen returned the succeeding kickoff 92 yards to the end zone, increasing Columbia’s lead to 14 points.

The second quarter quickly became a shootout, with Holley launching a 45-yard completion to senior wide receiver Cameron Crayton and rushing for his first career touchdown. Holley and the Hoyas cut the lead to single digits, adding a 42-yard field goal to cap off the first half down 21-17.

The second half opened with disaster for Georgetown. Just as the Hoyas drove into opposing territory, Lions defensive back Ben Mathiasmeier intercepted Holley’s pass, setting Columbia up for a Lenhart rushing touchdown.

Georgetown bounced back just one drive later, as Holley found Crayton downfield for a 52-yard completion into the red zone. Crayton then hauled in a touchdown from Holley, bringing the score within four points.

In the fourth quarter, however, the Hoyas struggled to keep up with the Lions. Lenhart ran in for his third score of the afternoon, and another Mathiasmeier interception ended Georgetown’s last-second comeback effort. With time running out, Columbia lined up in victory formation.

Statistically, the Hoyas played a better game than the Lions. They outgained Columbia 476 yards to 354, won the time of possession by nearly 13 minutes and even gained three more first downs than Columbia throughout the game. Still, the most important numbers are on the scoreboard, and the Lions won that battle by 11.

Since the Lou Little Cup — named after former Georgetown and Columbia Head Coach Lou Little — was established in 2015, the Hoyas and the Lions have faced off six times and stand tied at three wins each.