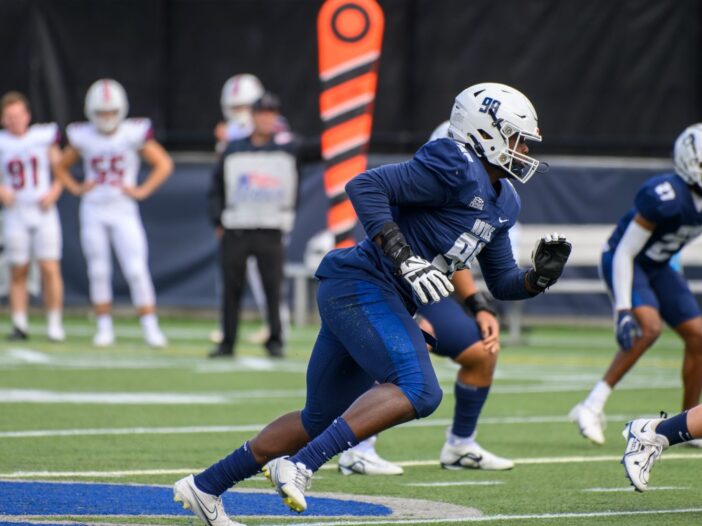 Powered by an assertive defense and a high-octane offense, the Georgetown football team secured a 30-20 victory over Lafayette in Easton, Pa.

The Hoyas (2-6, 1-3 Patriot League) recorded 6.0 sacks and 296 yards of total offense to lock up the Oct. 29 win over the Leopards (2-6, 1-2 Patriot League). Georgetown came out of the gates strong as senior quarterback Pierce Holley connected with graduate wide receiver Joshua Tomas for a 15-yard touchdown pass midway through the first quarter to put the Hoyas up 7-0.

The Georgetown offense did not lose a beat in the second quarter as senior running back Joshua Stakely found his way into the end zone for a 2-yard rushing touchdown to give the Hoyas a two-score lead. After forcing a 3-and-out from Lafayette on defense, Georgetown marched the ball down the field, giving junior kicker Richard Abood II the chance to convert a 27-yard field goal to extend the Hoyas’ lead to 17-0.

In the final seconds of the second quarter, Lafayette quarterback Ah-Shaun Davis managed to put some points on the board for the Leopards with a 5-yard touchdown pass to first-year wide receiver Elijah Steward, cutting the deficit to 17-7. The Leopards seemed to carry their momentum into the third quarter as they quickly scored a 2-yard rushing touchdown and brought the score to 17-14, putting pressure on Georgetown.

However, the Hoyas refused to let their lead slip away. With just under four minutes left to play in the third, first-year defensive back Wedner Cadet picked off Davis and returned the ball 26 yards to the Leopards’ 3-yard line. Cadet’s pick — his fourth of the season — set up a 3-yard touchdown run from graduate running back Herman Moultrie III, restoring Georgetown’s 2-score lead.

The Hoyas were hungry to widen their lead in the fourth quarter, and with 11:04 left in the game, Holley launched a 49-yard dime to first-year wide receiver Jimmy Kibble, who hauled it in for a touchdown to extend Georgetown’s lead to 30-14.

But the Leopards would not go away. With eight minutes left in the contest, Lafayette tight end Dallas Holmes secured a 2-yard touchdown pass from quarterback Rent Montie, putting the Leopards within striking distance of a comeback.

The Leopards failed to complete the 2-point conversion, leaving the score at 30-20. Neither team was able to score for the remainder of the game as the Hoyas secured their second victory of the season.

One of the keys to Georgetown’s hard-fought victory was their exceptional defensive play. The Hoyas sacked the opposing quarterback on six occasions for a total loss of 33 yards. First-year defensive lineman Mateen Ibirogba was particularly dominant, claiming 2.5 sacks for a loss of 14 yards.

The offense also managed a productive afternoon. Tomas grabbed 12 catches for 132 yards and a touchdown to add to Georgetown’s win. After his fifth outing with more than 100 yards this season, Tomas is 3 receptions away from breaking Chris Murphy’s (GSB ’93) program record of 74 catches in a single season. Holley was an efficient distributor in the pocket, throwing for 250 yards and 2 touchdown passes.

The Hoyas will return to Cooper Field on Nov. 5 against Saint Francis for the first of three consecutive home games to conclude the 2022 season. The matchup against the Saint Francis Red Flash kicks off at 12:30 p.m.