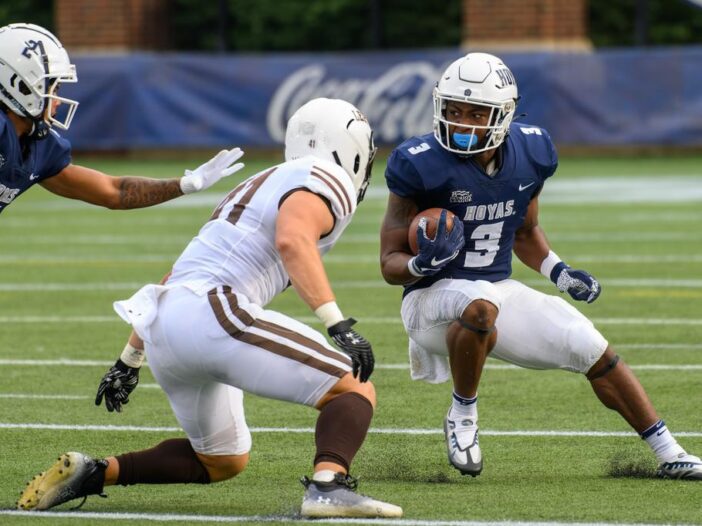 With just over a minute left on the clock in the fourth quarter, Georgetown football lined up for a 2-point conversion to tie the game. Lehigh, however, shattered its hopes for any late-game heroics by promptly stopping senior quarterback Pierce Holly’s rush to the right side of the field.

The Hoyas’ home opener at Cooper Field had an electric atmosphere despite both teams getting off to a slow start. The only points on the board in the first quarter came from a 23-yard field goal from Georgetown’s sophomore kicker Patrick Ryan. Ryan remains perfect on field goal attempts this season, converting all 3 of his kicks, with his longest from 28 yards out.

Despite this, a solid contingent of Georgetown (1-1, 0-1 Patriot League) and Lehigh (1-1, 1-0 Patriot League) fans filled the stands. Even though the Hoyas couldn’t build off of their big 43-12 win over Marist on Sept. 3, the loss carries no major implications for the rest of the conference season.

The first quarter score was followed by an impressive drive from the Hoyas, who jumped to a 10-0 lead with a touchdown early in the second quarter. Off the back of a forced fumble by first-year defensive back Wedner Cadet and an unsportsmanlike conduct penalty from the turnover celebrations, Holly threw a 19-yard pass to sophomore wide receiver Brock Biestek. The Hoyas drove the ball 89 yards to score. Starting on their own 11-yard line, the drive totaled 8 plays for 89 yards in just over three minutes of possession.

Georgetown did not maintain this momentum for too long, though. In the next drive, the Mountain Hawks scored a five-play, 74-yard drive before scoring yet another touchdown on their next possession and taking the lead 14-10.

Georgetown was able to stop the bleeding with the last possession of the first half, scoring off of a 28-yard field goal from Ryan. The Hoyas entered halftime down 13-14.

The Hoyas didn’t fare well at the start of the second half. Lehigh drove the ball 76 yards on the very first possession of the half, capped off by a 25-yard rushing touchdown that extended the Mountain Hawks’ lead to 21-13.

Georgetown was unable to respond in the third quarter, with each of its possessions resulting in a turnover on downs.

The remainder of the third and majority of the fourth quarters produced no further scoring, highlighted by plenty of punts and turnovers on downs. Georgetown managed to produce its second turnover of the game as Cadet caught his second interception of the season.

Eventually, the game came down to the final Hoya possession. With 4:25 left on the clock, Georgetown needed to drive down the field, score a touchdown and convert on a 2-point attempt to tie the game. In what was one of the biggest plays of the game, graduate wide receiver Joshua Tomas reeled in a 20-yard touchdown pass to make the score 21-19 with 1:04 left.

Down by 2 points, the Hoyas had to try for the 2-point conversion, but their attempt was thwarted when the Lehigh defense stuffed Holly. After failing to recover the onside kick, there wasn’t much the Hoyas could do as Lehigh ran down the clock.

Despite the loss, Head Coach Rob Sgarlata told Georgetown Athletics he was pleased with his team’s performance.

“I’m really proud of our guys for the way they trusted and relied on each other to make some plays and to get that last drive,” Sgarlata said. “Any time you get the chance to tie the game up late, it’s super exciting. We’re an extremely talented team that plays hard, that made some mental errors and Lehigh took advantage.”

The Hoyas will travel for another early-season test next weekend for a non-conference game when they take on the Monmouth Hawks (0-2) on Sept. 17 in West Long Branch, N.J.