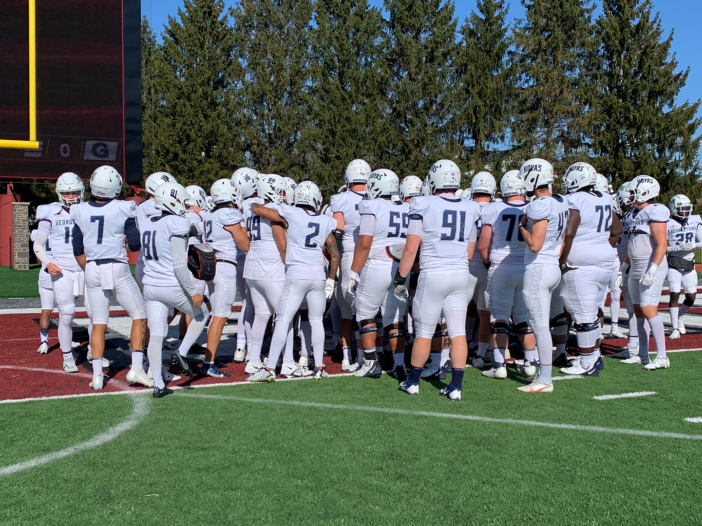 After bringing the Colgate lead down to one possession on three separate occasions, the two turnovers in the last Georgetown drives of the game snuffed out any hopes of a potential comeback.

The Hoyas (1-6, 0-3 Patriot League) entered the Oct. 22 game with high expectations and hopes of turning their season around against a Colgate team with a comparable record (2-5, 1-1 Patriot League). Despite the double-digit deficit, Georgetown managed to keep the game close until the end of the fourth quarter before falling 24-34 and extending their consecutive losing streak to six.

The game began with two productive drives by both the Raiders and the Hoyas, respectively. Both teams drove the ball deep into the redzone, but neither team could punch it over the line for a touchdown. Colgate scored a field goal, which Georgetown immediately responded to with a field goal of its own from junior kicker Richard Abood II to close out first-quarter scoring.

In the next frame, the Raiders scored 2 touchdowns, opening up the first of three individual two-score leads for Colgate. The Raiders put Georgetown’s defense under pressure as the two Colgate possessions in the second quarter totalled 72 yards from 10 plays and 77 yards from 13 plays, respectively. Notably, both touchdowns came from runs from Colgate quarterback Michael Brescia.

The Hoyas headed into halftime down 3-17.

The second half began far more evenly, though. Georgetown’s opening drive resulted in a 13-play and 75-yard touchdown. Senior quarterback Pierce Holley capped off the drive with a 3-yard rush, bringing the Hoyas within 3 points. In the following drive, Georgetown’s defense stood tall, holding the Raiders to a field goal, despite the drive starting on the Hoyas’ 17-yard line.

Despite three consecutive touchdowns from the Hoyas, a Raiders touchdown held their comeback at arm’s length and Georgetown never took the lead. By the early fourth quarter, the Hoyas were within three, 27-24, but that is the closest they would come to completing the comeback for the rest of the game.

A 40-yard touchdown run for the Raiders extended the Colgate lead back to 10, bringing the final score to 34-24 as Georgetown’s final two drives ended with a fumble and interception.

On offense, Tomas had a strong game, totaling a career-high 156 yards on 11 catches. Abood II went 1 for 2 on field goals, totalling 2 for 3 on season field goals and 12 for 12 on extra points since taking over field goal duties from sophomore kicker Patrick Ryan.

Holley put together a solid performance as well. Though matching the Raiders’ 34 points was a tall task, he was asked to throw 45 times and delivered, connecting on 32 attempts and logging 358 yards.

Despite graduate linebacker Justin Fonteneaux’s 13 recorded tackles, the Hoyas struggled defensively. Colgate’s passing offense was nonexistent, but that might have been because they didn’t need one; the Raiders totaled 331 rushing yards.

Brescia was just 8-15 for 70 yards as a passer, but he ran for 175 yards and 3 touchdowns. He averaged 8.2-yards per carry on 21 totes. Colgate could do whatever it wanted on the ground all game long, and Georgetown never had an answer.

The Hoyas will stay on the road and look to bounce back and improve their run defense when they take on the Lafayette Leopards (2-5, 1-1 Patriot League) for another conference contest Oct. 29 at 12:30 p.m. in Easton, Pa.