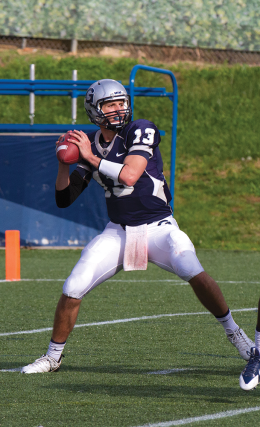 In its second-to-last game of the season, the Georgetown football team (1-8, 0-4 Patriot League) will head to Lewisburg, Pa., this Saturday to take on the Bucknell Bison (4-5, 2-2 Patriot League). While the Hoyas’ season has been derailed by a slew of losses stringing back to September, the team can still look for a Patriot League win and a chance to play spoiler to one of the league’s more competitive teams.

The Bison, however, represent a significant challenge for the struggling Blue and Gray squad. Bucknell trails by a game in the Patriot League standings, and with only two weeks to go, a win is critical for the Bison’s title hopes. Despite a shaky start to the season that included four losses in its first five games, Bucknell has become a force in the second half of the season, with a defense that shuts down opposing offenses and an offense capable of keeping pace with the best in the league.

“They’ve been playing really well. Their quarterback is healthy again — a four-year starter — and the team goes as he goes, so I expect great effort from them,” Head Coach Kevin Kelly said. “It’s their senior day … so we’re going to get their best shot.”

Bucknell’s recent success includes wins over teams that the Hoyas struggled against, including a 48-10 blowout of Lehigh, who beat Georgetown 45-24 four weeks ago, and a 28-7 stifling of Colgate a week after the Raiders defeated the Hoyas 34-14. For both Lehigh and Colgate, those games are the only losses on their conference records.

Those two wins were followed by last Saturday’s 23-21 loss to undefeated Fordham, a game the Bison would have won if not for a blocked field goal as time expired. The Hoyas will have to contend with a team coming off a string of successful games against some of the league’s best.

“They’re a ball control [team],” Kelly said. “They rank in the top five as far as ball control is concerned, [and] they play very good defense, so I don’t expect them to be much different than they’ve done in the last four weeks.”

The Hoyas are coming off an extra week of rest and preparation, with no game played last Saturday. After the Hoyas let their best chance for a win in weeks slip away in the second half of a 45-27 loss to Lafayette, Georgetown should be refreshed after the bye week. On offense, Kelly hopes to continue developing the experience of sophomore quarterback Kyle Nolan, who had some difficulties against Lafayette, including three interceptions, but was able to keep the Hoyas competitive for much of the game.

“I expect him to get better,” Kelly said. “He’s just a sophomore, he hasn’t had a lot of starts and we’ve had a couple weeks to get prepared, watch the film, evaluate and analyze, so I expect him to have a good game.”

Georgetown also needed to examine the issue of penalties, which caused serious setbacks against Lafayette and were a major reason the Hoyas could not keep the game close. Most of the penalties were not the result of serious conceptual misunderstandings, but rather on-field mistakes that manifested themselves in offsides, false starts and holding calls.

“It’s all about execution,” Kelly said. “We’re addressing it.”

There were some brighter points for the Hoyas to dwell on during their extra time, including the award-recognized performances of senior tight end Daniel Sprotte and junior defensive lineman Alec May, who both received CFPA honors for their play against Lafayette — gratifying recognition for a group whose talent has not been reflected in the team’s record.

“Both those guys played an excellent football game,” Kelly said. “It’s great to see that some guys are getting recognition.”

Bucknell leads the overall series between the teams 14-10-1, but Georgetown won the most recent contest 10-3 last November. Kickoff is scheduled for 1 p.m. Saturday.