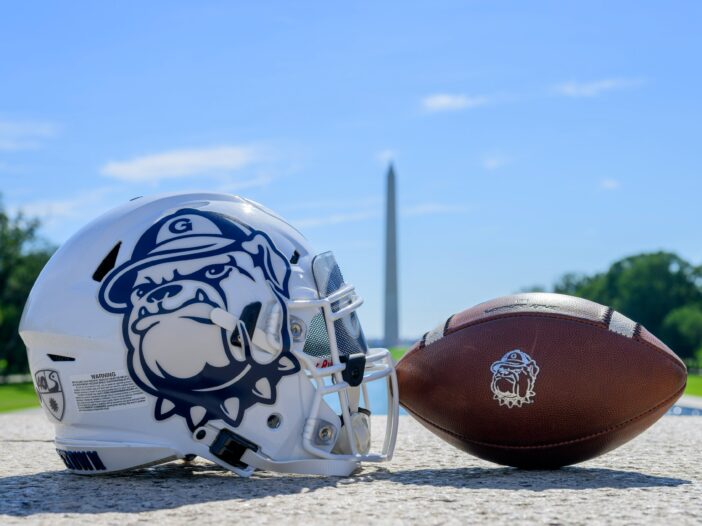 Coming off of a close conference loss against Lehigh on Sept. 10, the Hoyas fell 6-45 to the Monmouth Hawks at an away game. Georgetown is now 1-2 on the season despite a hot start with its opening win over Marist.

The Hawks (1-2, 0-1 Colonial Athletic Association) controlled the Sept. 17 game from the get-go, scoring on their first two possessions of the game and never looking back. While the Hoyas (1-2, 0-1 Patriot League) initially held on, with two field goals in the first half, the Hawks built an insurmountable lead after halftime and cruised to a resounding win.

Unfortunately for the Hoyas, the first two Monmouth drives were dominant. They totalled 18 plays and 149 yards, with both ending in a touchdown run from Hawks running back Owen Wright.

Meanwhile, Georgetown’s first possession was a punt, followed by a 28-yard field goal from sophomore kicker Patrick Ryan, who closed out scoring in the first quarter.

The offensive split was far more even in the second quarter. This time, the Hoyas’ defense held the Hawks to punts for most of the quarter, with the exception of a 14-yard touchdown reception by Wright, who finished the first half with 3 touchdowns under his belt. Meanwhile, Ryan added another three points to the board with a season-long 38-yard field goal. The Georgetown sophomore kicker remains perfect on field goals this season, hitting all five of his attempts through three games.

The Hoyas entered the half down 6-21.

The second half did not start well for Georgetown, as Monmouth scored the only points of the third quarter on its first play of the half: a 67-yard touchdown run. Following that, the Hawks scored on every drive apart from a missed field goal late in the third quarter and a punt on their final possession.

The Hoyas also struggled offensively, turning the ball over twice and punting on their other four possessions. Senior quarterback Pierce Holley threw his first interception of the season as a result of pressure from a Monmouth defensive lineman.

Despite the lopsided score, Georgetown Head Coach Rob Sgarlata told Georgetown Athletics he has a positive outlook for the rest of the season.

“Early in the game, we had chances to keep ourselves in the game,” Sgarlata told Georgetown Athletics. “A great learning experience with a lot of guys getting playing time and that will play dividends down the road. We will use this opportunity of playing a good team to learn as we come back to play Columbia on the Hilltop.”

There are some positives to be taken away that indicate the game was less Monmouth-dominated than the score may show. In terms of possession time, the Hoyas weren’t outmatched, with Monmouth only carrying the ball for seven minutes longer. Similarly, the Hoyas totalled 19 first downs to Monmouth’s 24. In the end, though, Georgetown couldn’t convert these into points on the scoreboard.

One of the reasons for this lack of points was an unusually poor performance from the Hoyas’ rushing attack. Georgetown only averaged 2.2 yards per rush — well below where they would like the offense to be. On defense, the Hoyas caused problems for themselves, giving up 90 yards to Monmouth from nine penalties.

The Hoyas will look to address their defensive mistakes and capitalize on their offensive chances when they take on the Columbia Lions (1-0) on Saturday, Sept. 24 at 12:30 p.m. on Cooper Field. Georgetown will attempt to reclaim the Lou Little Trophy after the Lions took it home in a 35-24 win last season.

Since their first meeting in 1901, the Lions hold an all-time 5-3 series advantage over the Hoyas. The two teams are tied at three wins in Lou Little Cup games, though, making Saturday’s game a tiebreaker in the rivalry.