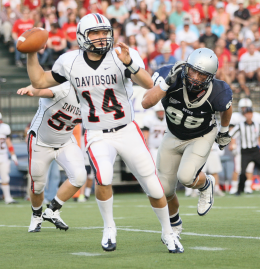 In a matchup of Washington rivals, the Georgetown defense had its best game of the year, holding Howard to a solitary field goal in a 21-3 victory over the Bison.

“They are a much-improved football team,” Head Coach Kevin Kelly said. “I want to [mention that]. That was a hard-fought game up to the fourth quarter.”

In a game with only 10 points scored in the first three quarters, the Hoyas were able to put together a strong 14-point fourth quarter to extend their slim lead and recapture the Mayor’s Cup after 2009’s loss to the Bison.

“Our defense did an excellent job of putting our offense in [a good] position, which was a big thing in this game,” junior wide receiver Jeff Burke said.

After a scoreless first quarter that included three points and an interception for each squad, the Hoyas were able to strike first in the second quarter on sophomore running back Nick Campanella’s 6-yard touchdown run with less than five minutes remaining In the half.

Two big plays by sophomore wide receiver Zack Wilke — a 20-yard reception from junior quarterback Isaiah Kempf and a 37-yard run on a reverse — brought the Blue and Gray to the Bison 6-yard line, and Campanella did the rest.

Neither the Hoyas nor Bison scored again until the fourth quarter, when the Blue and Gray came to life. The key moment came on a trick play in which Burke took a pitch from Kempf, only to find senior tight end Tucker Stafford in the back of the end zone for Burke’s second touchdown pass this season.

“I was a little bit [nervous],” Stafford said. “I mean, I didn’t really think about it much, but it was a good feeling to get in the end zone and it really got the momentum going for our offense to finish the game.”

The real star of the game, however, was the Georgetown defense. It held the Bison to only 241 total yards — 126 on the ground and 115 through the air. The name of the game on both defensive sides was pressure, as neither offense was able to make anything happen for the majority of the game.

“Since they have a young quarterback [freshman Greg McGhee], who is going to be an excellent player, we wanted to put a lot of pressure on him, especially on third downs to force quick throws,” Kelly said.

This strategy proved to be especially advantageous to the Blue and Gray, as they were able to disrupt McGhee and prevent him from getting in a groove. The young signal-caller threw two interceptions and had just 25 yards on the ground.

Senior defensive end Andrew Schaetzke and junior linebacker Robert McCabe once again led the defensive effort. McCabe recorded a team-high 13 tackles while also grabbing a key interception late in the fourth quarter, while Schaetzke added six tackles, including a sack and one other tackle for loss.

The Hoyas finished off the scoring on a 4-yard pass from Kempf to senior running back Chance Logan, two plays after McCabe returned his interception to the Howard 4-yard line.

Kempf had a mediocre passing game, registering just 97 yards through the air, but made up for the lack of production in the passing game with 84 yards on the ground. In all, the Blue and Gray dominated the ground game, rushing for 191 yards.

For the first time since early September, the Hoyas return home on Saturday to face off against Patriot League foe Colgate on Homecoming weekend.