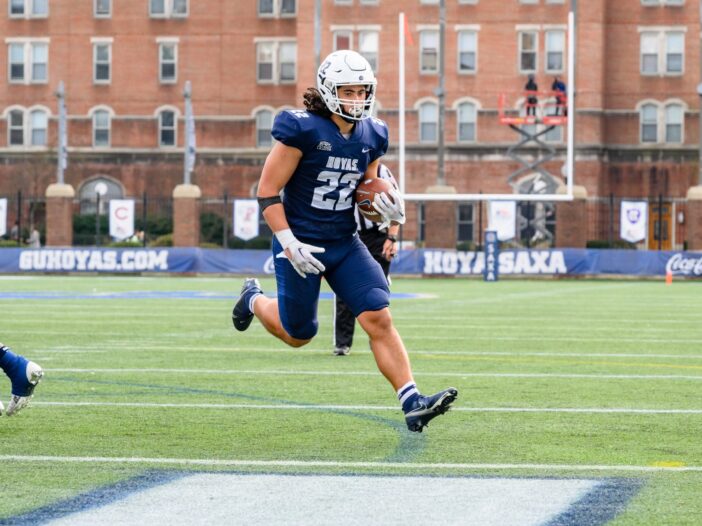 It was a fairy-tale ending. With three minutes remaining, the team completed a chain of solid drives with ruthless efficiency, culminating in a beautiful run after catch that the booth ruled a touchdown. A successful two-point conversion sent the game into overtime, where a good field kick and an interception secured the win. The crowd whipped into a frenzy, screaming in disbelief at the astonishing comeback.

There was one inconvenient sidenote, though. It was not Georgetown University that won.

Searching for their third win of the season, Georgetown (2-8, 1-4 Patriot League) took a patient approach against the Bucknell University Bison (2-8, 2-4 Patriot League) behind senior quarterback Pierce Holley. Relying on a series of short checkdowns and runs, the Hoyas were able to make consistent gains and work themselves out of third downs.

The strategy initially proved effective as Holley threw a floater that sailed over a herd of Bison defenders, eventually finding senior wide receiver Dorrian Moultrie to put the Hoyas up, 7-0, with 7:04 remaining in the first quarter.

Bucknell and Georgetown proceeded to trade turnovers on downs following unsuccessful offensive gains. In the Bison’s second offensive possession a holding penalty halted their momentum, although kicker Matt Schearer blasted a 50-yard field goal to shrink the lead to 7-3 early in the second quarter.

On the next drive, graduate receiver Joshua Tomas and graduate running back Herman Moultrie III put up strong efforts to lead the Hoyas into the red zone. However, disaster nearly struck after Bucknell failed to intercept an errant pass. In an unwelcome encore, Holley chucked another meatball toward a hungry pack of Bison defenders, this time resulting in an interception by linebacker Blake Leake.

Near the end of the second quarter, Bucknell ran into penalty trouble again and failed to mount a threat. The Hoyas, conversely, seemed rejuvenated after halftime as they forced a Bison punt following a sack.

Tomas recorded a pair of excellent catches, juking out a Bucknell defender and speeding into the endzone for Georgetown’s second touchdown. Wasting no time, the Bison responded with a 93-yard kick return touchdown by running back Coleman Bennett to narrow the Hoyas’ lead to one score with 10:45 remaining in the third.

Despite the previous hiccup, Georgetown regained their composure as they returned to a steady pace of play. A solid 26-yard linkup between senior quarterback Tyler Knoop and Dorrian Moultrie on third down extended the drive, and senior running back Joshua Stakely proceeded to punch the ball across the goal line to secure a commanding 21-10 lead with 4:59 left in the third.

As time ticked away, both offenses seemed allergic to the goal line. The undisciplined Bison managed to pick up a single field goal out of three separate drives but lost any hope of gaining a touchdown due to two sacks, an illegal formation penalty and a holding penalty.

The Hoyas returned the favor by replacing previous patience with sloppiness. Four consecutive drives ended in an interception, a failed fourth down conversion and two turnovers on downs. Georgetown seemed to be daring Bucknell to erase the lead with any bout of competence.

Surprisingly, the Bison managed to eke out enough points for overtime, stringing together multiple fast-paced gains with no timeouts left to secure a crucial touchdown and 2-point conversion with 47 seconds remaining.

Overtime proved that Bucknell’s greatest threat was itself, as the team settled for a field goal following their seventh penalty of the game. All Georgetown needed was to notch some points to win or extend the game. Ultimately, Holley tossed his third interception of the game, allowing the Bison to seal a 24-21 win.

Despite the defense’s best efforts with three sacks and 11 tackles for a loss, the offense simply could not generate enough momentum to protect Georgetown’s lead.

“We started extremely strong and have to continue that momentum throughout,” Sgarlata said. “I thought we had our opportunities to close out at the end of third and early in the fourth and just didn’t take advantage of them.”

Georgetown looks to end its season on a high note against College of the Holy Cross on Nov. 19 at 12:30 p.m. on Cooper Field.