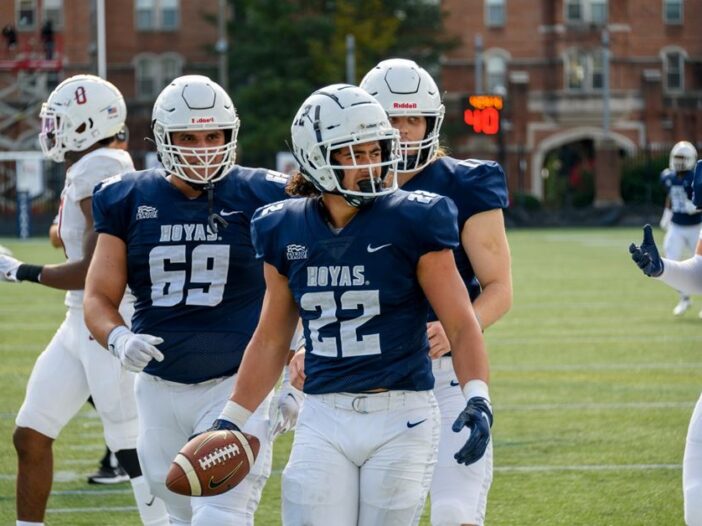 Georgetown’s running back tandem of senior Joshua Stakely and graduate Herman Moultrie III combined for 172 rushing yards and three touchdowns to lead the Georgetown football team over Marist College, 43-12, in its season opener.

Georgetown’s ease in running the ball helped the Hoyas control the game from the beginning, according to Head Coach Rob Sgarlata.

“Any time you come into an opener you want to make sure that you can establish the run, so you can control the game,” Sgarlata told The Hoya after the game. “We talked to the team all week about the team that makes the least amount of mistakes is probably going to win in the opener.”

Outside of their 224 total rushing yards, the Hoyas’ (1-0) passing game also provided an efficient one-two punch for the offense. Hoyas senior quarterback Pierce Holley completed 83.3% of his passes, finishing the game with a touchdown, zero turnovers, and a perfect passer rating of 158.3.

Still, the Hoyas have room for improvement, particularly on special teams. While Georgetown blocked two punts, the team also missed two extra point attempts and fumbled the first punt of the game.

Although he recognized the team wasn’t perfect, Sgarlata said his players’ resilience throughout the game led to the win.

“We weren’t perfect by any stretch,” Sgarlata said. “I was very proud of the kids that even when we had some things not go the way we wanted to, instead of going down they rose up. If you look at the way we finished the fourth quarter, we had over 12 minutes of time of possession, only threw the ball once and closed out a nice road win to start the 2022 season.”

Play by play, the Hoyas dominated the game.

On the first drive, Georgetown marched down the field before turning the ball over on downs deep in the Marist red zone. This theme of excelling with long offensive drives continued for the remainder of the game. By holding the ball for long drives, the team chewed clock and wore down the Red Foxes’ defense. By the time the clock ran out in the fourth quarter, Georgetown amassed over 16 minutes more possession time than their opponents.

With the Hoyas’ sore spots against Marist almost exclusively coming from self-inflicted damages, Sgarlata said the Hoyas’ biggest competitor this season is themselves.

“We talked about it this morning: it is really not Georgetown versus Marist or Lehigh or Monmouth, it is Georgetown versus Georgetown,” Sgarlata said. “This team has a lot of talent and everything is in front of us. We’re really just trying to take it each day and keep getting better by the one percent.”

Sgarlata explained further that the Hoyas just need to focus on consistent improvement rather than their week-to-week opponent.

“Every team we play is well coached. Every team we play has good players. Week in and week out we are gonna be challenged. The success of this season is going to be determined by how much we get better week to week, not necessarily who we have to play in a different color jersey.”

The Hoyas’ next chance to build on an impressive start is in their home opener versus the Lehigh Mountain Hawks (0-1), who are coming off a blowout 17-45 loss to the Villanova Wildcats (1-0). Students can watch the game and the Cooper Field Opening Celebration for free, with kickoff scheduled for Saturday, Sept. 10 at 5:00 p.m.