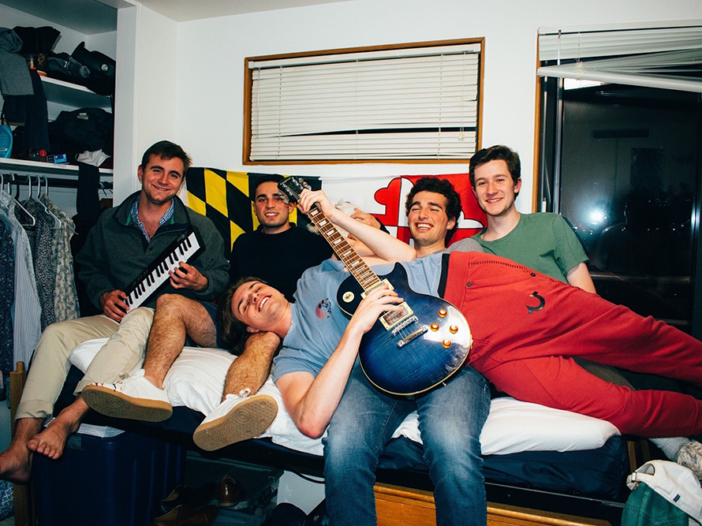 Indie-rock group Back to Yours had their first performance in the fall of 2017, during the culminating showcase of Georgetown University’s one-credit “Guild of Bands” class, a semester-long course that serves as rehearsal time for student bands.

Now, in spring 2020, Back to Yours has over 29,000 monthly listeners on Spotify, has played sold-out shows in both Washington, D.C., and New York City, and is anticipating the May 1 release of their debut album, “Where Are We Going.”

The five-man group is comprised of Daniel Luttway (COL ’20) on vocals and keyboard, Tommy Levin (COL ’20) and Bryce Kassalow (COL ’21) on guitar, Aiden Jones (COL ’20) on bass and Jiaan Mansuri (COL ’20) on drums. After nearly three years of holding regular practices, releasing music and performing both on and off campus, Back to Yours is eagerly anticipating what comes next.

The band formed in the fall of 2017. Jones, Luttway and Levin, who were sophomores, had met and become friends the year prior. Mansuri and Kassalow were new to Georgetown – Mansuri had transferred from the University of Southern California and Kassalow was a freshman – but had attended high school with Luttway in New York City.

After recognizing their shared interest in music, the group started playing together in Luttway and Jones’ Alumni Square apartment. They only made it through a few practices before realizing they needed a real rehearsal space if they wanted to continue making music, according to Mansuri.

“It was loud, and people hated us,” Mansuri said, laughing, in an interview with The Hoya.

“We wanted a space on campus where we could play loudly and people wouldn’t complain, and that was Studio D,” Luttway explained, referring to one of the four rehearsal spaces located in the New North building.

When the five band members went to visit Studio D, they learned it was locked and that to gain entry, they needed to join Georgetown’s “Guild of Bands” course, an audition-only music class that guarantees access to the rehearsal space and equipment. The five of them registered for the course, and, after a lengthy text debate over an appropriate band name, Back to Yours was born.

Prior to forming the band, the five members had varying levels of musical experience: Almost all of them played instruments, Levin was in a Christian rock band in high school and Mansuri studied music recording before transferring to Georgetown. Playing together pushed them to further their skills – Mansuri taught himself to play the drums and Jones shifted his guitar skills to bass – and inspired them to create their own music.

By their first “Guild of Bands” class, the group had already written four original songs, and by the culminating showcase at the end of the semester, Back to Yours had made the decision to keep playing together. Despite the small audience – 10 people, Mansuri joked – they loved performing.

By the spring of 2018, they were holding regular practices and writing music like the funky and rhythmic “Mallory,” as well as their top-streamed song, “Feeling,” which currently has over 180,000 listens on Spotify. Later that fall, the band performed a show for the Georgetown University Collective of Creative Individuals, and then another for the Georgetown Program Board in Bulldog Alley. Mansuri attributes the band’s biggest breaks to the experiences gained from these two performances.

Seeking even bigger opportunities, Back to Yours launched its social media platforms, created merch and worked on branding with the help of a team of friends and early fans like Mikko Castano (COL ’20), Keeho Kang (COL ’20), Rob Kyte (SFS ’20) and Josh Molder (COL ’20). This group continues to support the band’s growth and success, and Molder serves as their manager.

“They did all the visuals, the T-shirts, the stickers, the photography,” Luttway said.

Their friends’ early encouragement was instrumental, according to Mansuri.

“Beyond that, they were our first supporters,” Mansuri said.

“They made us look a lot more legit than we were at the time,” Levin said. “And then the way that we branded and promoted ourselves to venues and other artists we were trying to open for became a lot more real.”

This behind-the-scenes work gave the band more time to focus on its music and to search for further opportunities to perform. Dedicated efforts to play bigger venues and grow a following would soon pay off.

Where They Were Headed

In April 2019, Back to Yours caught its big break opening for rock group Juice at Songbyrd Music House and Record Cafe in Adams Morgan. Juice, formed at Boston College in 2013, was named radio host Elvis Duran’s artist of the month in 2018 and subsequently performed on NBC’s “TODAY.”

“I emailed like 100 different bands and managers and I heard back from three of them,” Kassalow, who also serves as the band’s interior manager, said. “Two of them said no. One of them was Juice, and they said yes.”

The show at Songbyrd had a crowd of around 200, a significant change from prior shows at Georgetown, which spurred the band forward.

“We couldn’t stop once we got to that point,” Kassalow said.

In the spring of 2019, Back to Yours played at The Pinch in Columbia Heights, was featured at campus events and continued to practice and develop a signature sound. The band continued writing and releasing music that the members felt reflected their time at Georgetown.

“Our songs are a lot about our college experiences and what we find fun or funny or exciting,” Luttway said.

Luttway mentioned “Mino Man,” a song about a Domino’s Pizza delivery man, as an example. Other characteristic tunes such as “Mango” have a carefree, upbeat sound that epitomizes the band’s style, with lyrics including “If you were a mango / I’m a vegetarian / Catch me in the produce aisle / Checking out your cousins.”

The group’s knack for spontaneous humor and the tendency not to take itself too seriously came through during their interview as they shared amusing tidbits like their hypothetical group wrestling stats. For the curious, together they clock in at exactly 30 feet and approximately 700 pounds.

By summer 2019, Back to Yours had found a rhythm, according to Kassalow. The band held regular practices, dubbed “Sunday Sessions,” performed at on- and off-campus venues and funneled all earnings from merch and ticket sales into equipment investments to book more community shows, such as their peers’ Tombs nights and other parties in the Georgetown community.

Creating a band at a university not typically associated with musical success required initiative, according to Kassalow.

“Something I’m really proud of is that we were able to step up and create this space that was just kind of waiting to be created,” Kassalow said. “The fact that we sold out Songbyrd is as much of a testament to the demand there was as to anything we did.”

At the start of fall 2019, the band built a makeshift studio in the basement of their Burleith house so that they could continue practicing and recording without the constraints of rehearsal space and studio time. The group started booking performances and making music for what would be its final year playing at Georgetown.

Making a Debut … During a Pandemic

On May 1, Back to Yours is releasing its debut album, “Where Are We Going.” The album, titled to reflect the uncertainty of post-graduation life, was very nearly named “breakfast at the vending machine,” as a tribute to the many vending machine breakfasts they consumed outside of the studio during their “Sunday Sessions.”

“Where Are We Going” consists of 12 songs, some of which were recorded in a professional studio in Virginia and others in the basement recording space in Burleith. A few of the tracks, such as “Space Cadette” and “Rainjacket,” were previously put out as singles. The eponymous track, “Where Are We Going,” was released on April 24 to tease the upcoming album.

For the remainder of the school year, Back to Yours is still living in the Georgetown neighborhood and spending much of its time practicing, writing new music and preparing for the release of “Where Are We Going,” despite the challenges of rescheduled events and closed venues.

“Having the album coming forward and following our initial plan to release it at the start of May is what’s been carrying me through the past few weeks,” Levin said. “It’s been one of the most exciting parts of the year.”

The changed circumstances of the spring semester led to the cancellations of seven of the band’s upcoming performances, both in D.C. and elsewhere, many of which likely will not be rescheduled. A particularly difficult loss was the show originally scheduled for May 14, the night before Georgetown’s Senior Ball, at D.C.’s Union Stage. Despite the cancellations, the band’s musical development seems to be benefitting from all of the recent time spent indoors together, according to Mansuri.

“Usually when we make music as a band, we have so much other stuff going on. I think that now with all of us being together, we’re able to practice and play uninhibited,” Mansuri said.

The creative process of writing and practicing is one that fills the hours without becoming repetitive or boring, according to Mansuri. The unusual circumstances have also provided time for musical growth.

“We can really listen to ourselves and feel out what we’re playing. It’s a free space to let creativity flow in a time where watching TV and playing video games gets old. Creativity never gets old. Spilling out and constantly thinking of new things and getting them down doesn’t get old,” Mansuri said.

Now that live performances are stalled, the group is spending more time creating and recording new music than practicing for performances, according to Kassalow.

“We can also be more experimental since there isn’t a constraint on studio time,” Kassalow said, a nod to the freedom that the group has gained by purchasing its own recording equipment.

Where They Are Going

As for what comes next, the band says it is playing things by ear.

“We never really had expectations when we started,” Levin said. “So to assign expectations now would hinder the time we have left.”

After the release of “Where Are We Going,” they hope to periodically drop new music and to perform again when circumstances permit. With four of the five members graduating, it is hard to say what will come next, but their future as a group does not seem to be up for debate.

“There are definitely more things we’re looking to do,” Jones said. The band plans to continue creating music together, but they are also taking things as they come, both in their musical and professional lives.

“Since day one, we haven’t known what’s going to happen,” Mansuri added. “We’ve gotten this far just by focusing on the music, focusing on playing with each other and enjoying that time together. That sense of going with the flow, who knows where’s that going to take us.”

Even with the uncertainty ahead, the group is grateful for their formative experiences and encouraging support thus far, according to Mansuri.

“At the end of the day, we couldn’t have done this without Georgetown. Our biggest breaks were because of GPB and GUCCI [Georgetown University Collective of Creative Individuals], because of Block Party, because of our professor David Murray in Guild of Bands, because of everyone who came to our shows,” Mansuri said. He paused, then added, “This has been the best part of my college experience.”

The rest of the band murmured in agreement. “This experience changed the course of our time here entirely,” Levin said.

“I always wanted to be a rock star,” Mansuri concluded. “If it ends like this, I’ll be happy.”