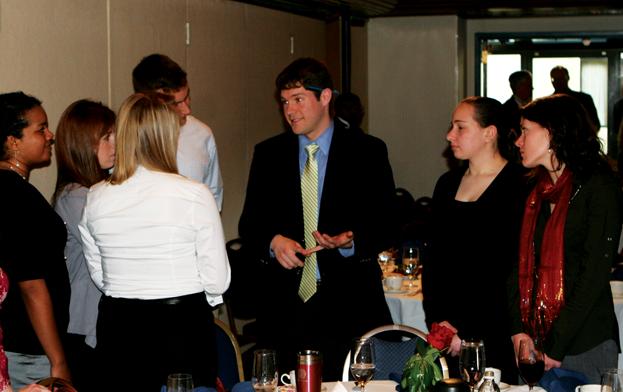 Former Minnesota governor and rumored presidential hopeful Tim Pawlenty did not mention Sam Potolicchio by name during his remarks last Thursday at the National Press Club.

But when Pawlenty stressed the need for “recruiting the best and the brightest to come into teaching,” the students of Georgetown’s Semester in Washington program could not help but smile in response. After all, their professor, who was seated just a few chairs over, is one of the nation’s rising stars in education.

Potolicchio (COL ’04, GRD ’09, ’11), a visiting assistant professor and doctoral candidate in the government department, was recently named a recipient of the K. Patricia Cross Future Leaders Award, an annual honor presented by the Association of American Colleges and Universities. Each year, only eight people across the country receive the award, which recognizes graduate students who “represent the finest in the new generation of faculty who will teach and lead higher education in the next decades,” according to AAC&U President Carol Geary Schneider in the letter announcing the award.

Professor Bradley Blakeman, who teaches the Semester in Washington along with Potolicchio, referred to his colleague’s accomplishments as “incredible.”

“[The Cross Award is] not only an honor for him personally and professionally, but for Georgetown,” Blakeman said.

Potolicchio’s interest in education did not begin in the classroom. As a freshman at Georgetown, Potolicchio coached a basketball team at the local Boys and Girls Club and made it his mission to integrate kids in a city he saw as filled with inequities.

He then moved on to the world of formal education during his time at Harvard. As a graduate student there, he obtained the necessary credentials and began teaching at a public high school in Boston.

Professor Clyde Wilcox, Potolicchio’s mentor in the government department and his co-author on many book chapters, affirms Potolicchio’s commitment to education.

“Sam Potolicchio is the best teacher I have ever seen,” Wilcox said. “In 25 years of teaching at Georgetown I have never seen a student more significantly dedicated to teaching.”

In addition to his work at Georgetown, Potolicchio currently teaches fifth-grade Latin and works as an admissions official at the Landon School, his former high school, located in Bethesda, Md. He has encouraged former players from the Boys and Girls Club team to enroll there, transforming the boys’ school into a local basketball powerhouse.

Potolicchio considers coaching the after-school sport to be an important component of his life as an educator.

“To really know a student, you need to know the student inside the classroom and outside the classroom,” he said. “I really don’t separate the coaching from the teaching, because for me it’s the same activity.”

He returned to coach the Boys and Girls Club team, the “Jelleff Hoyas,” in 2006. In total, the team has compiled six undefeated championship seasons under Potolicchio’s tutelage.

Joseph Graziano (COL ’07) was an assistant coach on Potolicchio’s club team while the latter was at Georgetown.

“We had this player who was far and away the best player and athlete in the league,” Graziano recalled. “And he had the ego to go with it. No one could reach him. In the first practice I watched Sam play defense against this kid as hard as he possibly could and do a little trash talking along the way.”

That practice was tense, but ended with a hug. “The young man is now a star at Damatha with scholarship options all over the country,” Graziano said. “And I saw Sam change his life in one practice. It was amazing stuff.”

Off the court, Potolicchio is also a teaching fellow for The American Institute of Political and Economic Systems in D.C. He was teaching in the Czech Republic when Kosovo’s declaration of independence was validated. One memory in particular stands out to him.

“The Serbians were heartbroken by the decision that they thought was very unfair, and for the Kosovar students it was one of the best things that had ever happened in their lives,” he said. “Literally 20 minutes after that happened, I went with eight of my students to go play soccer, and I purposely put a Kosovar and Serbian student on the same team, and they had the best teamwork together … [after one goal] they gave each other this huge high five, and I was like, ‘You can’t write this stuff.'”

But Potolicchio’s influence also hits closer to home. He has taught several government courses focusing on religion and communications in politics at Georgetown and has also served as a teaching assistant. He is a three-time Teacher of the Year at the university. On the popular website RateMyProfessors, Potolicchio has an overall quality rating of 4.9 out of 5.

“Sam had a really great way of teaching, and I think the best part of his class is that he uses analogies that anyone can understand,” Dougherty said. “He really brings the material down to its most basic elements, removing the clutter that kind of muddles the ability of a lot of undergrads to see the real picture.”

With all of his accolades in higher education, one might consider Potolicchio overqualified to teach fifth graders. But according to Potolicchio, it fits right into his method.

“My philosophy is that to be a good educator, you have to be involved in many different points in the educational system to really have that deep knowledge,” Potolicchio said.

Potolicchio’s trademark energy is not only intellectual, but perhaps biological as well. He admitted that he needs only one to three hours of sleep a night. With so many accomplishments arriving at such a rapid pace, Potolicchio could probably write his own ticket, but he remains attached to Georgetown.

Correction: This article originally stated that Potolicchio taught in Kosovo as part of The American Institute of Political and Economic Systems. He actually taught in the Czech Republic.