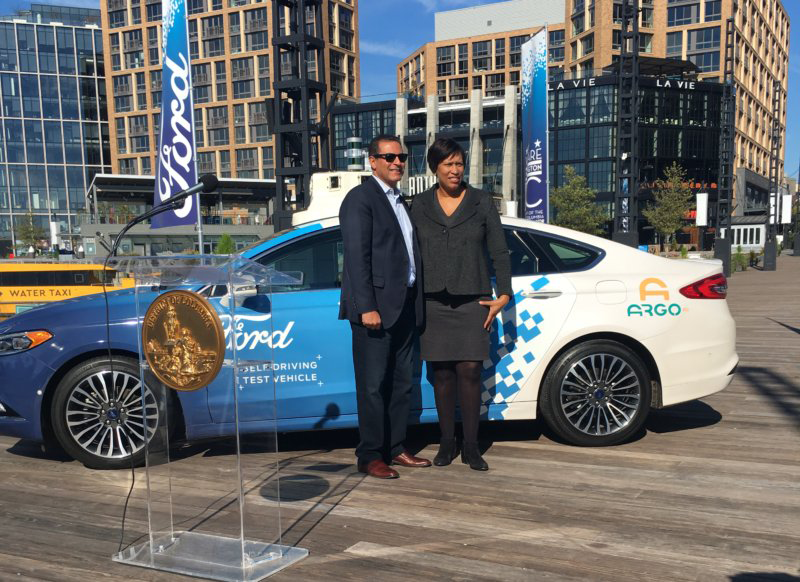 The testing will begin in D.C.’s Ward 5 and will gradually expand to encompass the entire city, according to an Oct. 22 news release. Ford plans to introduce commercial services in 2021.

The test drives will use cameras, lasers and other sensors to map roads and identify obstacles. Every test will have two human backup drivers in the car, although Ford plans to eventually remove the drivers as the AV technology develops.

The partnership is part of the Bowser administration’s long-term strategic vision for the emerging technology to improve traffic conditions, alleviate the environmental cost of transportation and promote urban equality across the District.

By lowering costs for ride-hailing and delivery services and reducing the need for residents to own their own cars, city officials believe driverless cars hold the potential for equitable economic development.

“If it can make it cheaper for someone in Ward 8 to order fresh food — food access is a major issue in some of our neighborhoods — that’s a big win,” Office of the Deputy Mayor for Planning and Economic Development Chief of Staff Andrew Trueblood said in an interview with The Washington Post.

Bowser’s office chose to partner with Ford among the many players in the self-driving car industry because of the company’s willingness to commit to a longer timeline, Ford Autonomous Vehicles President and CEO Sherif Marakby said.

“We realized very quickly that we can launch a small number of cars in an area right away — but then not create a healthy business that helps the city,” Marakby said in an interview with The Washington Post.

In addition to its longer rollout plan, Ford has also committed to running a training program for workers in the transportation industry that would be displaced by driverless vehicles, according to the news release.

In partnership with the D.C. Infrastructure Academy, an initiative run by the District’s Department of Employment Services, Ford will train workers for future careers around self-driving technology.

“The partnership between Ford and the DC Infrastructure Academy is another pipeline the Bowser Administration has created to connect Washingtonians to sustainable careers, giving them a fair shot at economic prosperity,” a DOES official wrote in an email to The Hoya. “We are also exploring and encouraging innovative approaches that will enhance mobility and delivery services for residents in all eight wards.”

The DCIA initiative targets D.C. residents facing barriers to finding and retaining employment, according to a DOES official. Available job opportunities are expected to include maintenance, troubleshooting and development of autonomous vehicles, according to the news release.

Ford plans to expand its program to run fleets of hundreds or even thousands, of driverless cars in major cities, according to The Washington Post.