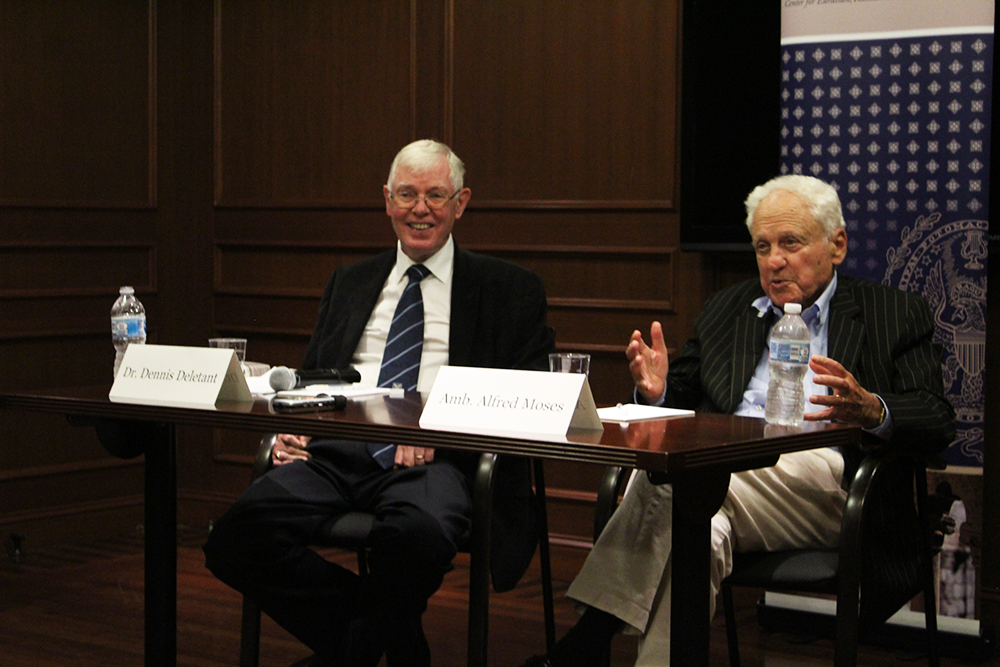 Former U.S. Ambassador to Romania Alfred Moses (LAW ’56), who served in the 1990s during the rebuilding of Romania after the fall of communism, chronicled his time as ambassador at a book talk Tuesday in Gaston Hall.

Moses served as the U.S. Ambassador to Romania from 1994 through 1997, during the country’s transition from communism to democracy. Before his time as ambassador, Moses worked as a lawyer for Washington, D.C. law firm Covington & Burling and served as special counsel to President Jimmy Carter from 1980 to 1981. He also served as Vice President of the American Jewish Committee, a Jewish advocacy group that focuses on civil liberties.

Moses’ book “Bucharest Diary: Romania’s Journey from Darkness to Light” was published in July and describes his experiences as ambassador to Romania during the country’s transitional period.

The Center for Eurasian, Russian and East European Studies and the Institute for the Study of Diplomacy co-hosted the event, which was moderated by CERES professor Dennis Deletant.

As ambassador, Moses helped the Romanian government recover from the collapse of the Soviet Union and transition away from communism, he said.

“The U.S. in the eyes of the Romanians had defeated the Soviet Union and freed them, and so I was there to help them,” Moses said. “I was the one carrying the torch, so I felt I had to light the way.”

In the mid-1970s, Romania was under Communist rule, led by Communist leader Nicolae Ceausescu. Communism lasted for over 20 years in Romania, from the early 1960s until the Romanian Revolution in 1989. Moses said this period of communist rule left Romania and its citizens in poverty.

Following the Romanian Revolution in 1989 and the execution of Ceausescu, the country was left without any political structures or politicians, according to Moses.

“There was no political class after Ceausescu was shot,” Moses said. “With the entire leadership gone and no successors, the country had to start from ground zero.”

The United States was reluctant to provide economic assistance because of Romania’s history with communism, Moses said

“Those who just didn’t like communist regimes were opposed to giving any kind of favorable economic breaks to communist governments,” Moses said.

His role as ambassador was to represent U.S. interests as Romania rebuilt its government, according to Moses.

Moses’ interest in Romanian politics was piqued when he first traveled to Romania in 1976 at the request of the American Jewish Committee, and was told that Jews in Romania were struggling.

“When they told me they needed my help, that became my cause,” Moses said. “They were treated very poorly; many went to jail, including those who had been active in the communist party. It was a purge. That was one of the sins of the communism.”

Moses’ experience working in the Carter administration paved the way for his appointment to become ambassador to Romania, Moses said.

“I became the U.S. Ambassador only because one of my staff when I was in the Carter White House knew I was interested in Romania and sent my nomination to the senate,” Moses said. “Three months later I was in Bucharest for three years.”

Moses’ efforts were a key factor in paving Romania’s alliance with the US today, Deletant said in an interview with The Hoya.

“The problems facing Romania were greatly helped by his attempts to address them,” Deletant said.