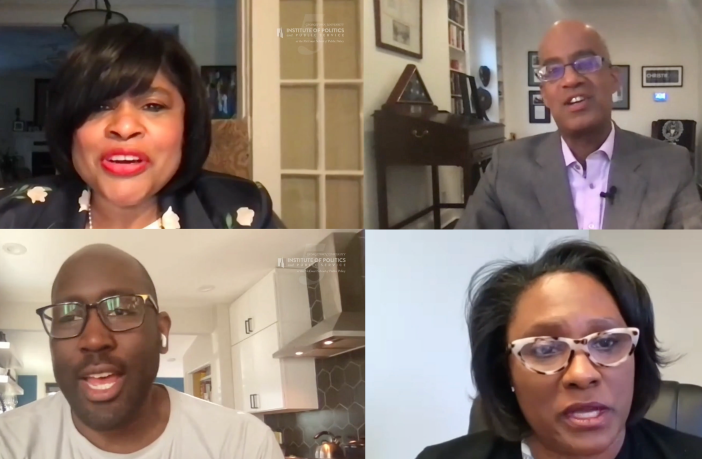 The event, titled “Black in the White House,” was co-sponsored by the Georgetown Institute of Politics and Public Service and The Blaxa, a campus media organization that focuses on amplifying Black voices at Georgetown. The panel featured Ron Christie, Marlon Marshall (GRD ’19), Minyon Moore and Jona Van Deun, all former White House staffers, and it was moderated by Juana Summers, a political reporter for National Public Radio.

Panelists discussed their past experiences as some of the few Black staffers working in the White House. There is a noticeable lack of diversity in the White House, according to Van Deun, who formerly served as the director of scheduling and advance to second lady Lynne Cheney.

“I was so excited to be there and wanted to do the best I possibly could and bring as many people along as I can,” Van Deun said at the event. “There really aren’t a lot of people like me, Black, conservative, republican women. I couldn’t think of one.”

Presidential administrations have a long history of sidelining Black Americans from the work of political staff in the White House. In 1955, Everett Frederic Morrow became the first Black man to hold an executive position on a president’s staff. More recently, former President Donald Trump’s administration faced criticism in 2018 for having zero Black staffers serving in senior positions.

Due to the lack of Black representation within the White House, Black viewpoints are often tokenized, according to Christie, who was a special assistant to former President George W. Bush.

“All Black people do not have this monolithic experience,” Christie said at the event. “You can’t effectively govern as the president or the vice president unless you recognize that there are more voices to be heard.”

Black staffers often feel pressure to stay silent on issues for which they are not directly responsible, especially because their voices are often marginalized and tokenized, according to Moore, who served as an assistant to former President Bill Clinton.

“When I worked at the White House, there were a lot of times when you walk in those rooms when you really just don’t feel like saying anything,” Moore said at the event. “But there is never a time where you should be silent when you know that it is going to impact people, not just people of color, but it could be poor people, white people, but if it’s going to impact them then you have to be willing to speak up.”

President Joe Biden’s senior staff includes several people of color and women. Although diversity and inclusion have historically been an issue within the White House, seeing more Black staffers in future administrations at the White House is necessary to inspire young Black Americans interested in politics to pursue a career at the White House, according to panelists.

Despite the challenges of working as a Black staffer in the White House, it was still an honor to serve the country, according to Christie.