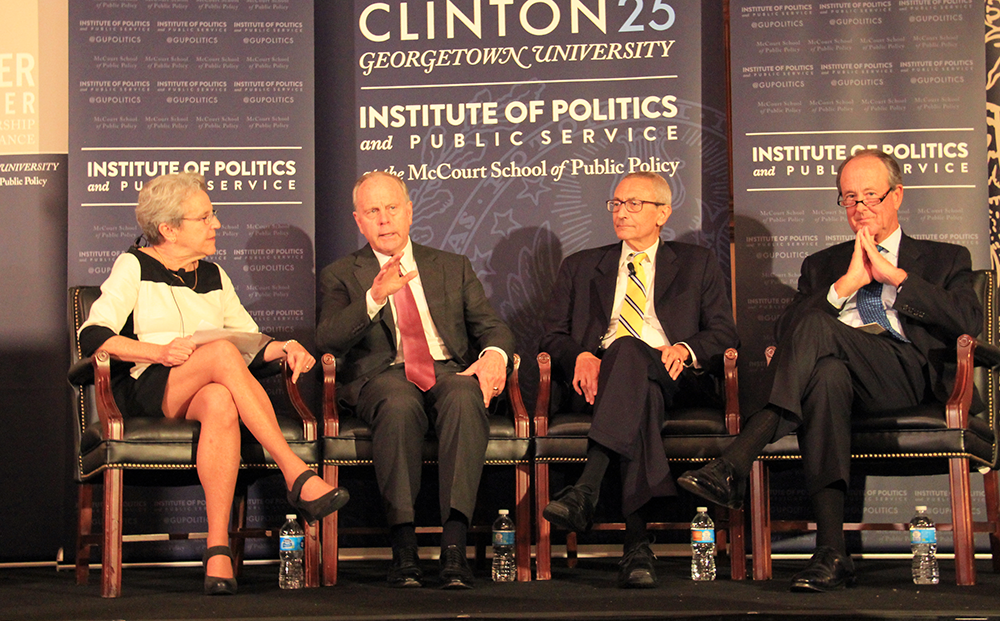 The leadership and negotiating skills of former President Bill Clinton (SFS ’68) helped him actualize his vision of putting people first in his policies, said three Clinton White House chiefs of staff at a panel forming part of the “Clinton 25: Georgetown Reflects on the Vision of Bill Clinton” symposium Monday.

“He was willing to do the tough things you have to do to end up with a principled compromise,” said Erskine Bowles, who served from 1997 to 1998 as White House chief of staff, regarding Clinton’s leadership ability.

Bowles spoke alongside Mack McLarty and John Podesta, who recently served as campaign manager for former Secretary of State Hillary Clinton’s 2016 presidential bid. Their comments came during the “Clinton 25” symposium’s “Vision of Leadership and Service” panel, which focused on Clinton’s leadership style and belief in the role of government as a tool to help people.

The symposium was hosted by the Georgetown University Institute of Politics and Public Service.

McLarty said that governance without vision and a plan does not get results, but that Clinton was motivated by deep convictions that characterized his presidency.

“He had a vision of what he wanted to do,” McLarty said. “It was under the themes of putting people first.”

“It was what centered the administration. He knew who he was fighting for,” Podesta said. “And through thick and thin, when times were good and times were bad, all he cared about was could he deliver.”

Bowles said Clinton would often arrive in the morning with various newspaper clippings of problems people faced across the country and a note reading, “Erskine, go fix this.”

McLarty attributed much of Clinton’s desire to help others and put people first to his experiences in his grandparents’ shop in Arkansas.

“He spent many hours in grandfather’s store, who they had as a clientele, lower-income people working hard to make ends meet, and he saw that firsthand and saw his grandparents trying to help them,” McLarty said. “That influenced his early feelings about public service and how he related to other people.”

Republicans attempted to shut down the government twice in 1995, expecting Clinton to give in, but Clinton’s resolve in refusing to let Republicans block grant Medicaid worked to his benefit during budget negotiations in 1997, according to Bowles.

“They found out they were dealing with a guy who had a real backbone. A guy who would stand up and fight for what he believed,” Bowles said.

Balancing the budget, one of the hallmarks of Clinton’s presidency, was an achievement that McLarty, who had known Clinton since kindergarten and who served as his chief of staff from 1993 until 1994, said even he was unsure anyone could achieve the task.

Podesta, who served as chief of staff from 1998 until the end of Clinton’s second term in 2001, also said that many doubted that the former president would successfully balance the budget.

“Our plan was to balance the budget, and balance it in a way that respected our values. And to do that, we had to play the long game. We had to have the vision … we had to be really willing to work at it day in, day out,” Bowles said.

Clinton brought people together and made concessions to realize his goal, Bowles said.

The Clinton administration managed to secure an entitlement in 1997 creating the Children’s Healthcare Insurance Program, which decreased uninsured children from over 14 percent down to 5 percent, an effort Bowles said brought Clinton joy.

“When [Podesta] and I walked into that office and told him we had a deal, he looked at me and listened; we told him what we got,” Bowles said. “Boy, when we told him we got that health care insurance for 5 million poor kids, I’d never seen a guy light up so much, because that’s why he ran. Those are the priorities and principles under which he governed. That was his true north.”

Though Podesta, Bowles and McLarty all acknowledged the distinctions today in the political landscape regarding globalism and fiscal responsibility, Podesta said he believes tying the success of the country to the success of working people rather than solely to the national economy was a lasting principle of the Clinton presidency and vision that continues to influence the Democratic Party.

“Central to Clinton’s economic theory was the success of the middle class, attacking income inequality,” Podesta said. “The heart of the Democratic Party still believes in that.”