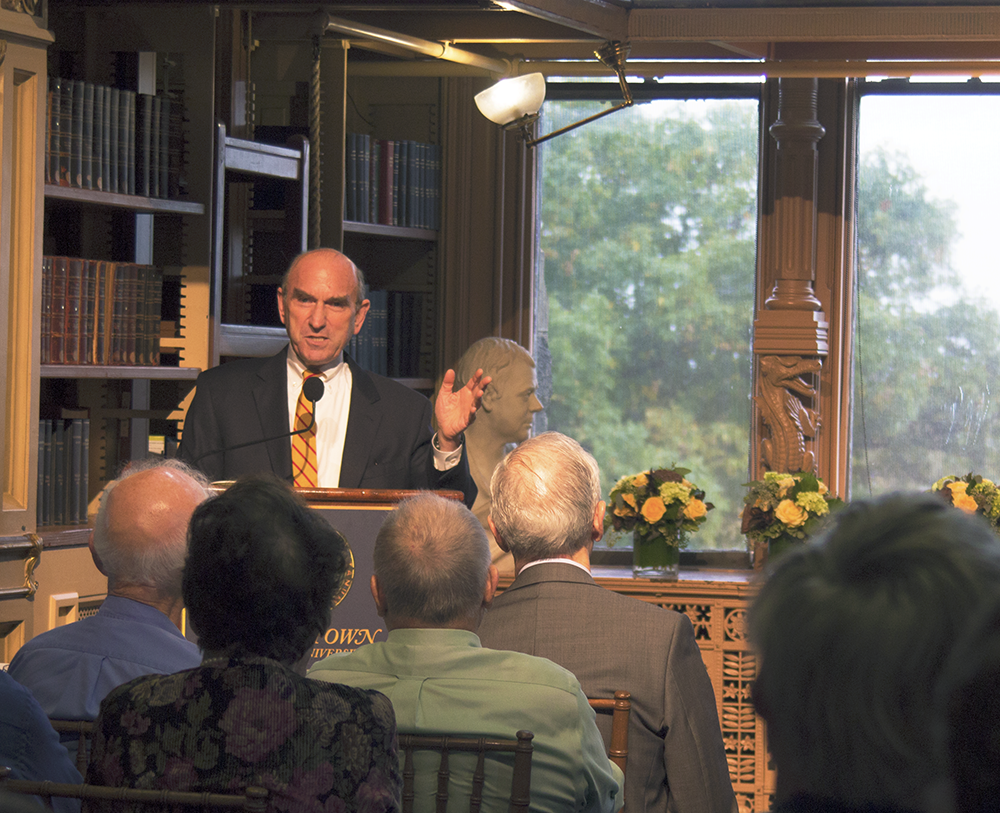 During the event hosted by the Center for Jewish Civilization, Abrams, who advised former President George W. Bush on policy toward the Middle East, discussed his latest book, “Realism and Democracy: American Foreign Policy After the Arab Spring,” and explained why the United States cannot count on dictators to defeat Islamic extremism.

Abrams argued that extremist ideology should be confronted by dialogue and debate, to convince adherents that extremism does not accurately reflect the teachings of the Muslim faith.

Drawing from the outcomes of 2015 parliamentary elections in Turkey, Abrams said the self-perpetuating cycle of Islamist fundamentalist parties triumphing in elections after periods of military rule demonstrates that these regimes failed to sway civilians away from extremism.

Abrams also said the United States’ support of strongmen like Egypt’s former President Mohammed Morsi backfired, as they deliberately preserve Islamist organizations like the Muslim Brotherhood to maintain their appeal and repress centrist and liberal dissidents.

“[Morsi] wanted to be able to say to us in Washington that, ‘It’s me or the Brotherhood.’ So he saw an alternative, a moderate center, as a great risk,” Abrams said. “It’s not just Egypt; it’s standard for such dictators to crush the center.”

Abrams said the United States should instead protect and support Arab promoters of democracy through political means, such as providing them safe havens, as they represent the best option for stable democracies.

“It would be nice if we would begin to prepare for the day when there would be a more open political system by strengthening the center now,” Abrams said.

Abrams also cautioned against relying on nongovernmental organizations that are based in the United States and enjoy no political presence within the Middle East. According to Abrams, though they can be helpful for overcoming communication and cultural barriers, NGOs ultimately prove ineffective in spreading a message to the broader population.

Abrams said the failure of the Arab Spring does not mean that Islam is incompatible with democratic governments; rather, the failure of democracy movements signifies a lack of institutional memory or of regional support necessary for democracy to grow.

“Democracy will arrive slowly in the Arab world, late in the Arab world, and it may arrive and disappear, and arrive again in various forms, sometimes weak forms,” Abrams said. “Sometimes oddly enough, there will be more progress in the monarchies, progress toward becoming a constitutional monarchy, than there will in some of the other countries.”

Abrams remains convinced that securing democracy is the best way to stabilize the region and bring an end to the threats of terrorism.