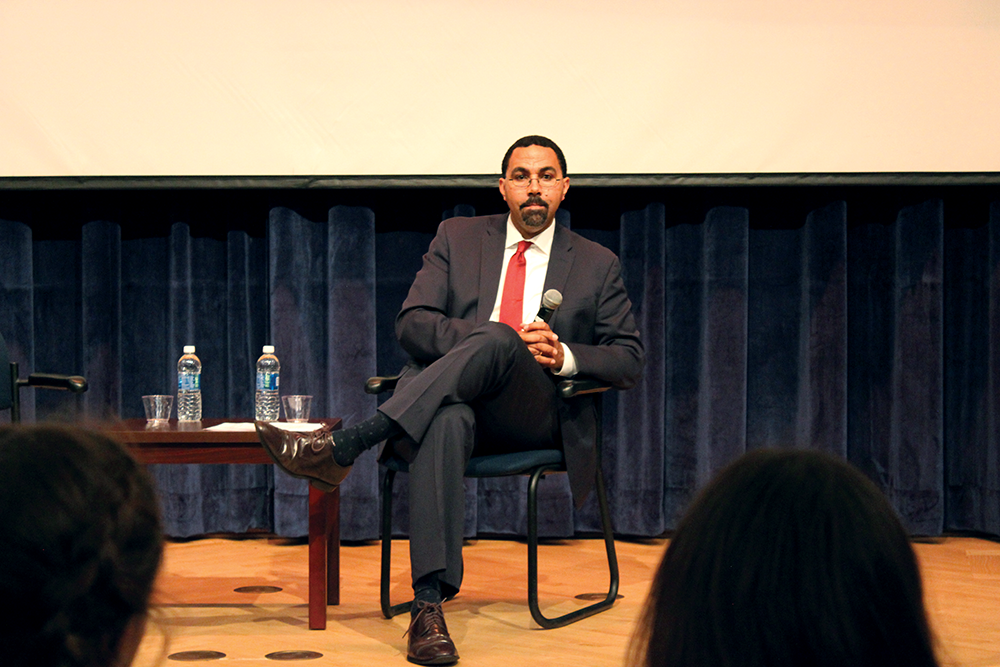 Former Secretary of Education John King Jr. said the United States must push for diverse student bodies and teachers in public schools to close the nation’s racial achievement gap, in a lecture organized by the Georgetown College minor in education, inquiry and justice Tuesday.

Students of color and low-income students are disproportionately educated in low-performing schools, King said, a disparity that significantly contributes to achievement gaps between white and non-white students. These gaps come from the United States’ history of institutional racism, according to King.

“For students of color, disparities in educational opportunity and achievement are inextricably linked to our nation’s continued struggle to grapple with issues of race and bias,” King said. “It is America’s brutal legacy of slavery and the imposition of segregation that first made the education of black people a punishable offense and then established a separate, inferior system of schools for black children.”

Analyses by The Education Trust, a Washington, D.C.-based education research and advocacy organization, have found deep racial disparities in access to high-achieving schools. A 2010 study by the group found that black students in California are six times more likely than white students to attend schools in the bottom third of the state for achievement levels.

Educational disparities and de facto segregation in schools hurt all students, according to King. Not only do they keep students and teachers alike from facing their implicit biases, but they also prevent students from unlocking their full potential.

“Diversity offers us a better path, in terms of academic outcomes and brighter futures for all of our students,” King said. “Students in socio-economically and racially diverse schools, regardless of their economic status, achieve stronger outcomes than students in schools with concentrated poverty.”

King also emphasized the importance of having diversity in teaching staff in addition to the student body.

“All students benefit when they learn from adults who are diverse,” King said. “I believe it is important for white students to see teachers and school leaders of that community who are of color. It helps them get a sense of what diverse adult leadership can offer.”

“There’s no other way to think about that except that it is an assault on the American dream and an attempt to really dismantle public education in serious ways,” King said.

King proposed that supporting education should not be a partisan issue and highlighted a Tennessee program that allows all state residents who graduated high school to attend community college for free.

“I think the better alternative can be found in Tennessee, a state with a Republican governor and a Republican legislature. … [T]here is a guarantee that if you graduate from high school in Tennessee, then you can attend community college for free,” King said.

King stressed the importance of education for a functioning society throughout his talk, noting several times that quality education for all children is vital to the nation.

“The strength of our democracy depends on ensuring that all of our young people are prepared to be effective citizens and help resolve the great challenges we face as a society,” King said. “If we are unable to confront the history of race and racism in our schools, then we will not be able to move past the impact of racism in our society.”