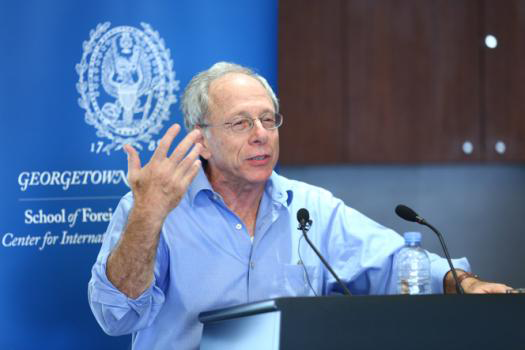 American values are not always so dissimilar from those in conservative Muslim countries, posits Gary Wasserman (SFS ’66), a former professor of government at the Georgetown University School of Foreign Service in Doha, Qatar, in his recent book reflecting on his experiences living and working in Doha.

Wasserman taught from 2006 to 2014, joining the SFS-Q faculty just one year after the institution opened its doors.

Since his return to the United States from Doha, Wasserman has dedicated his time to writing his book, “The Doha Experiment: Arab Kingdom, Catholic College, Jewish Teacher,” which was published Nov. 14 and discusses his eight years in the region.

Wasserman highlights his efforts to reach across boundaries and describes his experience administering a liberal education in a region of the world unfamiliar to many Americans. Through personal anecdotes, Wasserman discusses not only the lessons he sought to teach but also how his interactions with his students changed his own understanding of the world.

The Hoya sat down with Wasserman to learn more about his experience abroad.

You have previously mentioned the unusual nature of teaching as a Jewish professor at a Catholic school in a predominantly Muslim country, so what inspired you to go to Qatar?

I had been working mostly in Washington as a political consultant, then I taught for a year in China, and I enjoyed the experience of teaching overseas. It was frankly easier to get a job overseas, and I also thought this would be an interesting, challenging opportunity. Now, unfortunately, when I told my family and friends about this, they all looked at me like I was crazy, you know?

This was a few years after 9/11, and a Jewish professor going to the Middle East to teach sounded to many of them like an act of lunacy, and I began to wonder about my own sanity. I talk in the book about how you have to start out with a kind of “You’re going to do what?” to getting to know real people on the ground and finding that the categories that we use for understanding people we don’t know very well tend to fall away.

Your book talks about the tension between Qatar’s traditional society and Georgetown’s mission of liberal education. Can you elaborate on that?

Georgetown was set up for foreign service, essentially to educate bureaucrats in becoming administrators, but Georgetown itself — the administrators and teachers — saw themselves as providing a liberal education.

Grounding in philosophy and economics and history and politics, which was more oriented to educating the whole person, they weren’t trying to train students into a certain profession. They were trying to educate young people in this tradition of liberal education. There was that disagreement and a kind of implicit misunderstanding, but I think the Qataris and the Qatari leaders were very welcoming of what Georgetown was doing, including courses like the “Problem of God” for instance, and respecting Georgetown’s scholars’ willingness to take on what they were doing. They gave Georgetown a lot of scope to do what they were going to do.

You also talked about how Qatar was very different from its other Middle Eastern counterparts in terms of its willingness to globalize and its acceptance of Western cultural attitudes. Do you think that these schools that are coming in are a positive force in this regard?

Qatar and many of the nations are in flux. They’re very much sorting through what parts of their tradition they want to retain and what parts have to be adapted to the modern world. We’re not exactly the epitome of liberal societies now in the world. I think all countries adapt themselves in different ways to different pressures, different interests and different values. They are going through that adaptation, and I think they’re doing it with the resources they have. They have a lot of resources, a lot of money, and they have an enlightened leadership that I think understands that Qatar is going to prosper and survive in the world, and in the future they’re going to have to adapt to that globalized world.

Can you share one of those experiences that you thought was one of the more interesting ones you had there or that struck you?

I had a student in one of my classes who was always kind of bringing up Israel or Zionism in an international relations class; it seemed to always go back to the question of the involvement of Zionists in a little bit of conspiratorial stuff he was thinking. And it came out frequently in class, and we talked about it in private, in quiet, and of course, he didn’t quite see it that way. I suggested he look more into the topic, but I didn’t think it was a very successful discussion that we had.

About a year or two later, he came back, and he had spent a semester at Georgetown’s main campus, and he had taken a class in Jewish civilization. He came back and he said, “You know, I never would have taken this class if I hadn’t been in your course.” It was one of those unexpected benefits. You have those kind of encounters that you don’t think are having an impact, but in fact, they do.

You mention you wanted this to be a positive, vital force in the region. Do you think we’re succeeding?

I think it is succeeding. Whether it succeeds sufficiently and whether it is preserved remains to be seen, and part of it is how people kind of engage in what’s going on and spread some of the liberal ideas. Does press freedom expand in the society? Do women have more rights than they now have? There will be different markers, and I don’t think you go in there thinking your university is going to change the broader society or the broader region, but you do hope that over time, some of the ideas you’ve talked about have an impact.

What is something that you would like to see mentioned, or focused on more?

Is there anything you would like to add? Anything you think is important to you or to the book or to your experience in Doha?

What we’re doing in Doha is lowering walls. I think we came with the idea of being a modern missionary. We were going to deliver the truth in our campuses, and I think over time we’ve seen the importance of listening and trying to lower the walls a little bit between us and the rest of the region.