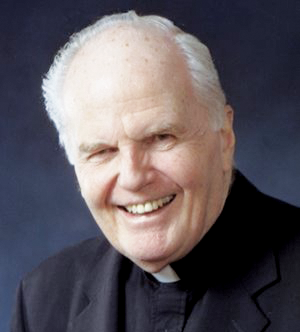 Fr. Charles Currie, S.J., a former Georgetown University chemistry professor and special assistant to the university president, died Jan. 4 at 88 years old. Currie is remembered not only for his service to Georgetown, but for his fierce commitment to social justice.

The oldest brother among five siblings, Currie was born in Philadelphia in 1930 and entered the Society of Jesus in 1950. Two of his younger brothers would go on to do the same.

Currie started his career as a chemistry professor at Georgetown in 1966, three years after being ordained as a priest in 1963. Currie also worked closely with students in pushing for equal civil rights and opposing the Vietnam War, according to his brother Rob.

The slain Jesuits had been advocating for a peace accord in the El Salvadoran civil war between left-wing rebels and the U.S. military-backed government. Currie worked with Congressman Joe Moakley (D-Mass.) and his aide, current Rep. Jim McGovern (D-Mass.), in investigating the killings.

“Few individuals would have had the moral, spiritual, intellectual, practical and emotional range to go through coordinating the celebration to a complete immersion in the politics of Central America in a moment of tragedy,” DeGioia said at the vigil.

In addition to his work with the Jesuits in El Salvador, Currie also worked closely with people in poverty in Latin America.

“His perspective was always dealing with those influential in society, but always from the position and the point of view of the victims of society,” Rob Currie said in an interview with The Hoya.

Currie heavily incorporated this empathy for the poor into his work in higher Jesuit education.

“He provided a unique blend of how to have direct contact with the poor while also creating systems that are about change,” Fr. Gerard McGlone, S.J., who led the vigil, said in an interview with The Hoya. “It was like this dual sort of giftedness that we don’t see anymore, that ability to join two worlds in a common vision and mission.”

After finishing his one-year tenure as special assistant to the university, Currie went on to serve as the president of the Association of Jesuit Colleges and Universities, an organization that connects 28 Jesuit institutions of higher education, including Georgetown.

As president of the AJCU, Currie oversaw the creation of JesuitNET, an online network that provides Jesuit education outside of a traditional campus. Currie later expanded this initiative in his role as executive director of Jesuit Commons, which grants degrees from Jesuit institutions to refugees across the globe.

Currie used his position at the AJCU to strengthen ties between Jesuit education and social justice in the developing world.

In 1996, Currie led student demonstrations outside the Fort Benning, Ga., military institute, where protestors believed the Salvadoran military personnel who executed the Jesuits in 1989 were trained by the American military. This protest developed into the Ignatian Family Teach-In, an organization that annually trains an international group of over a thousand members of Jesuit education institutions to advance social justice.

As president of AJCU, Currie also pushed for programs that bring college students in the United States to engage with the impoverished in El Salvador, Nicaragua and greater Latin America.

Currie also advocated for the elevation of women in the Catholic faith, in furtherance of his commitment to the principles of social justice and equality, according to Hirsh.

“He kept returning to the issue of women and women in the church in his actions, in his writing, his life,” Hirsh said at the vigil, citing Currie’s contribution to the book “Jesuit and Feminist Education.”

Currie also pushed for Linda LeMura’s appointment as president of Le Moyne College, where she became the first female lay president of a Jesuit university.

Currie’s influence in social justice has inspired those around him, giving him a reputation as “Charlie the do-er” for his focus on uplifting others, according to McGovern.

“He’s an example of being a man who believed that it’s not enough to talk the talk — you gotta walk the walk,” McGovern, who is going to El Salvador to commemorate the 30th anniversary of the killings, said in an interview with The Hoya. “Those of us who loved him and were inspired by him, we gotta change the world for the better.”