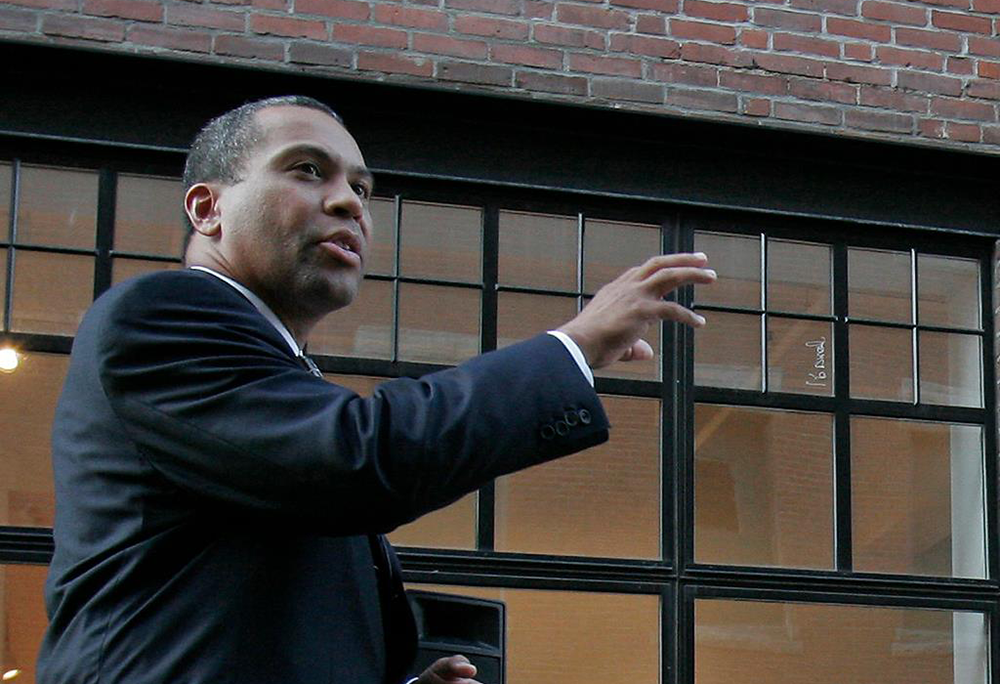 Titled “Social Impact Investment and America’s Health: A Fireside Chat with Deval Patrick,” the event was hosted by Georgetown’s School of Nursing and Health Studies and was moderated by Gregory Downing, the executive director for innovation in the immediate office of the Secretary at the Department of Health and Human Services.

Patrick, an active investor in socially conscious projects, said the business community must be involved in helping alleviate social issues, such as social inequities, as the community has been on the sidelines in addressing social issues in the past.

“In many ways we’ve expected government and philanthropy to solve what ails us and tell business, ‘Do what you do’ and, well, clean it up,” Patrick said. “It’s occurring to more of us that the scale of our challenges and the impact of them is so broad, so it’s going to take everyone on the field.”

Originally from the South Side of Chicago, Patrick moved to Massachusetts at age 14 and attended Harvard University for undergraduate and law school. Following his graduation from law school, Patrick launched his career as an attorney and businessman, eventually becoming a senior executive at Texaco and Coca-Cola. Patrick’s career in public service began in 1994 when former President Bill Clinton appointed him to serve as assistant attorney general for civil rights. Patrick later served as a two-term governor of Massachusetts, from 2007 to 2015. He was the state’s first African-American governor.

Today, Patrick works at Bain Capital, where he is involved in social impact investing, which refers to investments made into companies, organizations and funds with the intention to generate a measurable, beneficial social or environmental impact alongside a financial return. Patrick said this is a topic he became interested in while he was governor.

Since arriving at Bain Capital in 2015, Patrick found success with socially conscious projects like Impact Fitness and Springworks Therapeutics, two social impact investment projects. Impact Fitness seeks to implement a series of low-cost gyms in Michigan and Northern Ohio to target gym deserts, areas with few gyms and high incidences of diabetes and heart disease. The initiative included a partnership with local healthcare providers to measure times of week when people experience their lowest heart rates and tailor the gym hours to meet those times, Patrick said.

“The conventional economics of gyms is charge as much as possible and hope nobody comes,” Patrick said. “This is the upside down of that.”

Springworks Therapeutics, another investment project in which Patrick is involved, was founded in 2017 as a therapeutic development company that focuses on bringing faster treatment to patients. Springworks Therapeutics seeks to develop components of drugs at a lower cost than those currently offered by large pharmaceutical companies.

For Patrick, combining the benefits for the recipients of the program with benefits for the community and environment at large is an especially important facet of his work, a goal that he believes is relatively unique in public policy work.

“We are hungry for innovation in public policy,” Patrick said. “Successful innovation requires you raise your tolerance for failure, but politics punishes for failure.”

In addition to measuring the financial success of investments at the time of the project, social impact investing measures the impact of its investments when it comes to solving social or environmental issues to take account for benefits that will be enjoyed in the future, Patrick said.

“[Social impact investing is] an innovation back to the future,” Patrick said. “If you really believe in long-term value, you cannot manage to the financial bottom line alone.”

Patrick believes that this stance is due to the tendency in the United States to separate business work from social justice work, which is a practice he hopes to change.

“Many investors/corporations who believe you make money with one hand and do good with the other, and I’d like to challenge that,” Patrick said.