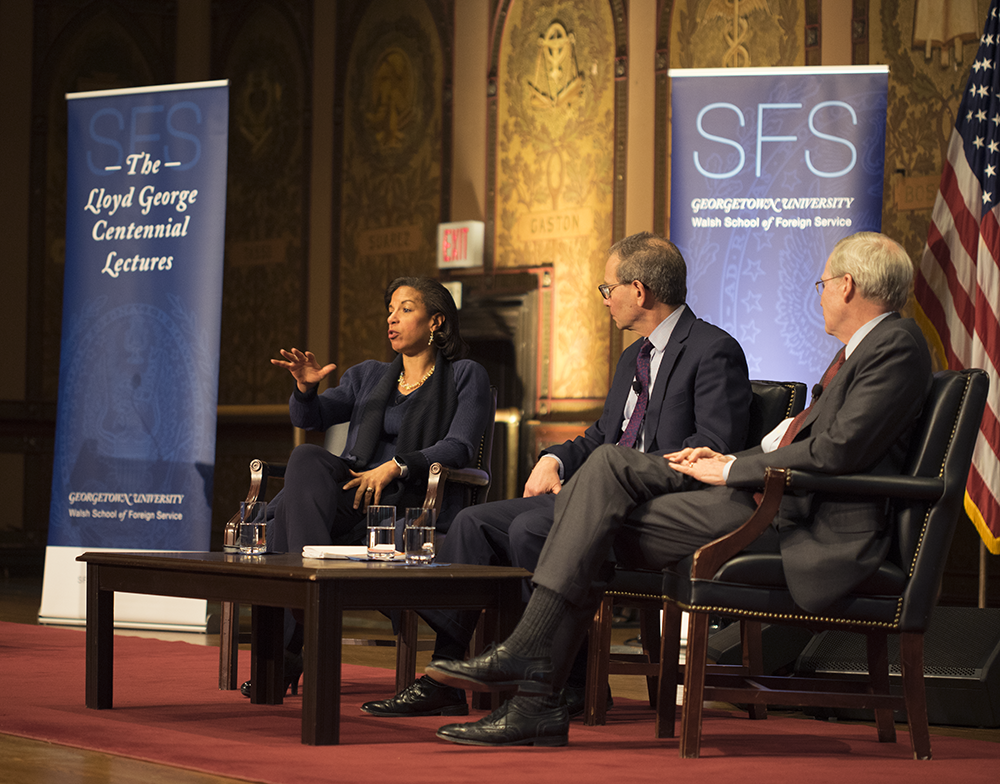 The United States should better communicate its dedication to allies, a facet of diplomacy that has been neglected by the Trump administration, according to Rice.

“We have to stabilize and invest further in our relationships,” Rice said. “We have been unsteady in recent years in terms of signaling our reliability, our staying power, our commitment.”

The United States withdrew its signature from the Trans-Pacific Partnership, a proposed trade agreement between 12 member countries, in January 2017. The remaining members negotiated a new agreement — the Comprehensive and Progressive Agreement for Trans-Pacific Partnership — in March 2018, disproving the predictions of many policymakers who thought that the trade deal would collapse without the participation of the United States.

Trump’s decision to exit global agreements like the TPP and the Paris climate agreement, an international effort to combat climate change signed by 194 states and the European Union, have delegitimized his leadership, Rice said.

“By withdrawing from the TPP, we created a vacuum,” Rice said. “These decisions have been weakening our strategic hand and weakening our global leadership.”

The Trump administration has also withdrawn from the Iran nuclear deal, a 2014 agreement that limited the country’s nuclear activities and allowed international inspectors to monitor compliance.

The administration’s near-singular focus on the Iran nuclear deal has drawn attention away from other, more pressing threats that Iran poses to the United States, according to Rice.

“We all agree that in an ideal world we would have addressed not only the nuclear threat from Iran, but all the threats from Iran,” Rice said. “I do want to point out that by pulling out of the Iran deal, we’re not focusing on those other threats now.”

Policymakers have criticized recent sanctions by the United States, including the 2017 Countering American Adversaries Through Sanctions Act, which imposed sanctions on Iran, North Korea and Russia, as vague and lacking specific policy outcomes, according to an October 2018 news release by the Center for Strategic and International Studies.

The tendency of U.S. leaders to resort to sanctions as a means to influence other countries is ineffective, according to Hadley.

“Sanctions have become our favorite tool because they don’t have a cost and they put us on the record for having done something,” Hadley said. “Our allies are getting sick of it.”

The event was organized by the School of Foreign Service as a part of the Lloyd George Centennial Lectures, which launched in February 2018 to celebrate the upcoming SFS centennial. Charles Kupchan, Georgetown professor of international affairs, moderated the event, which was held in Gaston Hall.

Trump’s approach to foreign policy, which he defines as “America first,” has enabled Russia and China to assume positions of global leadership, according to Rice.

“We have ourselves not been as active and present in taking advantage of our leadership potential, diplomatic muscle,” Rice said. “We’ve backed up a bit, and China and Russia have taken advantage of the vacuum.”

The Trump administration has departed from previous administrations, which forged close ties with China, by using a more aggressive stance that has hurt the U.S.-China relationship, Rice said.

“We are not posturing ourselves from a position of maximum strength to deal with the challenge that China poses,” Rice said. “Future administrations will need to do a lot of repair work and bridge-building.”

“There’s a lot of criticism of the Trump administration. He’s been right about some of the things that he did. I think he was right to be blustery when he came in,” Hadley said. “The three previous administrations who have tried to negotiate with North Korea haven’t been able to get them to uphold their agreement.”