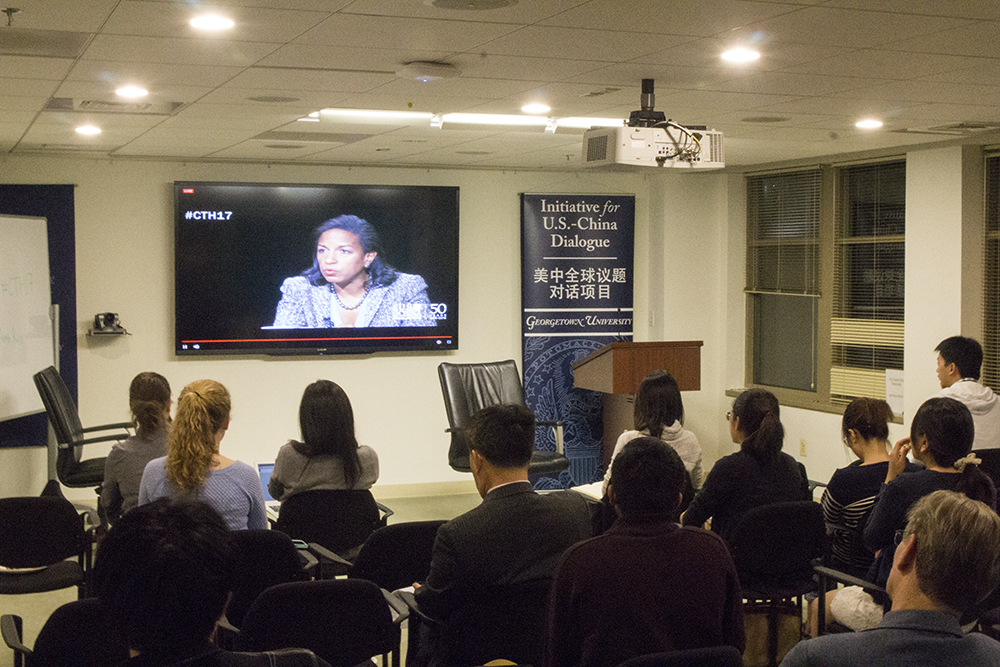 Georgetown University’s Berkley Center for Religion, Peace and World Affairs hosted the town hall as part of a nationwide dialogue at 85 different locations Wednesday night. The address was sponsored by the university’s Initiative for U.S.-China Dialogue on Global Issues, which fosters research and dialogue on matters of transnational importance.

Rice answered questions from Stephen Orlins, president of the National Committee on U.S.-China Relations, as well as questions emailed and tweeted by the national audience.

“The extremely heated rhetoric of President Trump, the threats that he was leveling — ‘fire and fury’ and the like, which were matching or exceeding the young Kim Jong Un’s rhetoric — was one, inappropriate, and two, dangerous. It risked precipitating miscalculation and inadvertent conflict,” Rice said.

At Georgetown’s event, Rice’s address was preceded by a conversation between Dennis Wilder, the Initiative’s managing director, and J. Bradford Jensen, professor and McCrane/Shaker Chair in International Business at the McDonough School of Business.

According to Rice, Trump’s criticisms of China’s permissive policy approach toward North Korea, threats to impose tariffs on Chinese exports and January phone conversation with Taiwan President Tsai Ing-wen during his transition into office have contributed to a lack of cooperation with China in addressing the North Korea threat.

“The U.S.-China relationship works best when there’s a high degree of communication and maximized mutual understanding at the highest levels,” Rice said. “I think that President Trump came in with some pretty hot rhetoric around China that left the Chinese side not clear about what our intentions were.”

“It is hard to find coherence in this strategy right now,” Wilder said.

Rice said that the United States should handle North Korea’s mounting nuclear capacity in the same way that it previously handled the nuclear-armed Soviet Union.

“We can manage this problem — if we must — through robust deterrence, in the same way we managed the Soviet Union during the height of the Cold War,” Rice said.

Trump will travel to Asia on Nov. 3 and stay until Nov. 14. An Oct. 16 White House press release confirmed visits to South Korea and China as part of the official trip.

According to the press release, Trump will call upon the international community to “come together and maximize pressure” on North Korea in an address to the South Korean National Assembly scheduled for Nov. 7. He will meet with China’s president, Xi Jinping, the following day.

“The North Korean issue will dominate the president’s trip to East Asia, no question at all,” Wilder said.

Rice said that China’s rapid economic growth should not threaten U.S. interests if addressed appropriately. China is the second-largest economy in the world by GDP and was the world’s fastest-growing economy until 2015, when it was overtaken by India.

“We need to recognize that China is going to continue rising. Its economy, its population, its capacity ensure that it will be and remain a very powerful country for the foreseeable future,” Rice said. “I believe that with wise and thoughtful leadership on the United States’ part — steady leadership — that we can manage a world in which China grows and continues to prosper.”

Both Rice and Jensen cautioned that the United States’ withdrawal from the Trans-Pacific Partnership will affect the political and economic dynamic with the countries in the Asian-Pacific region that are bound to the treaty, as well as China, which had expressed interest in joining. Trump formally withdrew the United States from the TPP, which had not been approved by Congress and never took effect, shortly after taking office in January.

“I think the power dynamic is shifting. It is not shifting in the United States’ favor,” Rice said. “The decision to cancel U.S. participation in TPP, I think, was an extremely big mistake.”

“For people who watch trade, you know, we hope the next four years will be short and that the damage will be minimal, but it seems increasingly likely there will be damage,” Jensen said.

With China being an important world player in matters ranging from trade and climate change to cybersecurity, Rice said that she hoped the Trump administration would improve, instead of strain, relations with the country.

“I hope very much that the Trump administration is looking for areas where we can expand our cooperation, not just points of friction,” Rice said.