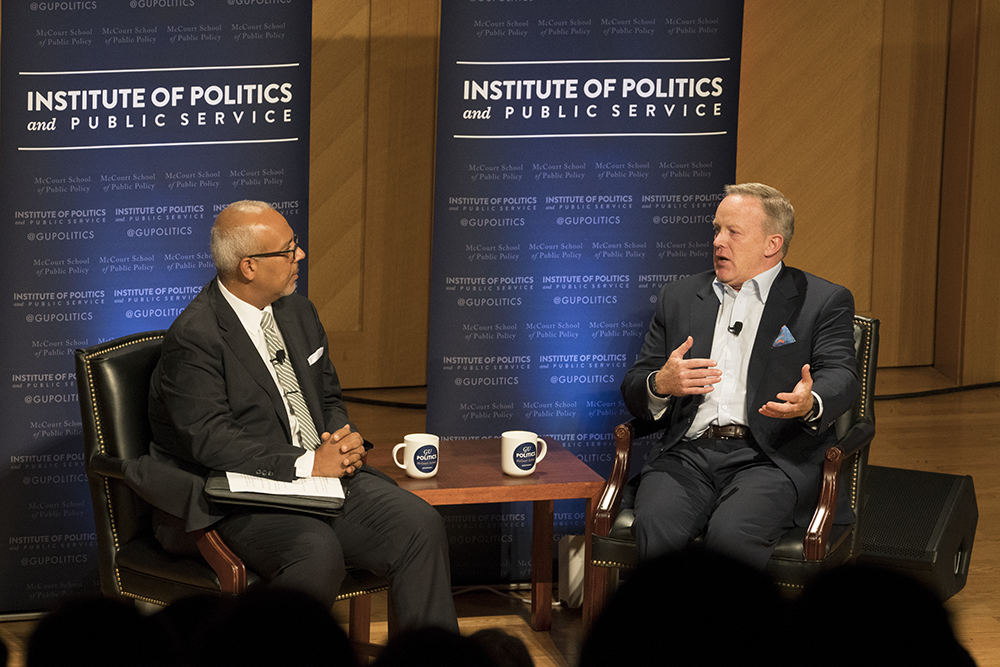 During the event, which was named after a book Spicer published in July about his tenure in the Trump administration, “The Briefing: Politics, the Press, and the President,” Spicer discussed his time as press secretary in the White House. Mo Elleithee, executive director of GU Politics, moderated the discussion.

Spicer resigned from his role as White House press secretary in July 2017 after vocalizing his disagreement with President Donald Trump’s appointment of Anthony Scaramucci as the new communications director. Prior to working as the White House press secretary, Spicer was the communications director and chief strategist of the Republican National Committee. He is currently the president of RigWil LLC, “a strategic consulting firm that provides insights to C-suite corporate and association executives,” according to Spicer’s website.

Spicer talked about the differences between working in public relations for public and private entities. He contrasted working for a private entity and reporting directly to its leader with serving the American people when he worked as a representative of the federal government.

Nevertheless, it is still the job of a spokesman to represent the views of the candidate, Spicer said.

“You represent a client, and if you get to the point where you’re uncomfortable, it is your duty to resign,” Spicer said.

Spicer also discussed the role of the press in the current political climate. A free press is part of what makes America the nation that it is, Spicer said. However, he critiqued the media industry for bias and for neglecting to retract false stories.

“I have never seen an industry where there is such a refusal to call out their own,” Spicer said. “When a story comes out that is demonstrably false, they refuse to do that.”

Spicer suggested punishing journalists who report falsities and exalting media organizations that report fact. He added that the bias of news media leads to much of the political divide that separates the country today because it is easier for people to solely listen to viewpoints they agree with. Spicer highlighted that many mainstream institutions and publications feature left-leaning ideology more than conservative thought, and that this isolates conservatives.

“The problem with the left is that they’ve never understood the frustration of the folks on the right,” he said.

Spicer said he was initially drawn to working with the press by the high-energy environment of getting a story out on time.

“The press used to be a daily battle,” Spicer said. “No excuses. Either you got the story out there or you didn’t. I loved that intensity, that knowing that you didn’t have to wait five weeks down the road to wait for that story to come out.”

Spicer encouraged his audience to listen to other points of view without condemning them as false or incorrect.

“The second that we demean people to the point that, just because you’re on the left and I’m on the right, that your thoughts and views are unacceptable, we’ve lost,” Spicer said. “If you can’t sit back and listen to somebody, we’ve lost what makes this country great,” he said.