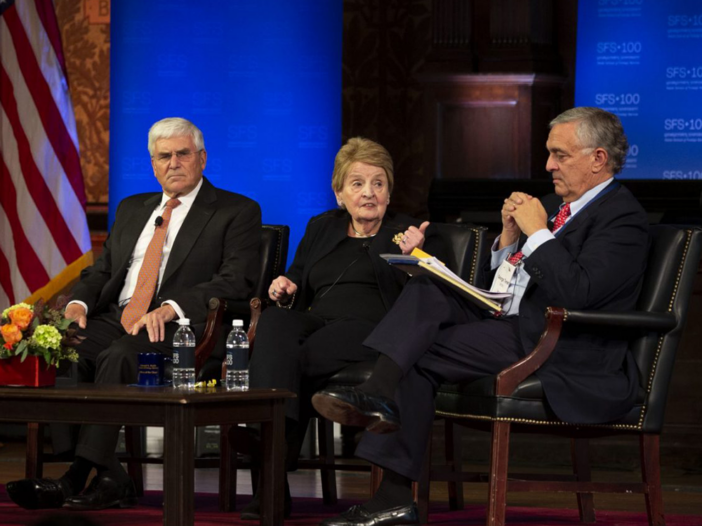 With a new administration set to enter the White House in January, the United States must rebuild its tainted global image, three former U.S. foreign policy leaders said during a virtual panel Tuesday.

The panel, which included former Secretary of State Madeleine Albright, retired four-star general George Casey and ex-CIA director George Tenet, expressed concern over the United States’ diminished international reputation and its consequences for future foreign policy. As the panelists discussed the country’s tarnished image, the Trump campaign continued its tenuous legal battle to overturn the results of the 2020 presidential election, an effort experts warn will further undermine the country’s democratic image and institutions.

In only the past year, the country’s reputation has slipped to new lows, according to Albright.

“I think that things have gotten harder for the United States in the last year. Our reputation has sunk lower. The last meeting that I went to, a real one, was in Europe at the Munich Security Conference in March. We were kind of a joke, even then,” Albright said.

President Donald Trump first announced that the United States would withdraw from the Paris Climate Accord in 2017, but the withdrawal became official this November. Countries criticized the United States for backing out, and the reputation of the United States has continued to drop around the world, particularly in light of the botched response to COVID-19. Health experts blasted Trump this summer for withdrawing from the World Health Organization amid a health crisis, another in a long list of missteps the panel said has hurt the United States’ reputation.

The world is watching to see what direction the United States is heading, according to Albright.

Casey warned that in the past four years, the United States has fallen behind the rest of the world.

Casey noted that the Biden administration will also have to address a host of complex security issues, including the ascendancy of Russia and China, Iran and North Korea’s growing nuclear capabilities and a revived terrorist threat to the United States and its allies.

“We’re even more divided politically than we were four years ago, and we’re dealing with a pandemic that’s affecting us personally and economically, and the administration really has its work cut out for them,” Casey said. “I think the road back to global leadership for the United States is going to take a long time if it happens at all.”

The three panelists agreed that the path for the United States to regain its global credibility is leading the fight against the COVID-19 pandemic.

“I do think that one really does have to do COVID first in all its aspects because it’s a virus that knows no borders,” Albright said. “It means dealing with things in the United States, but then also reestablishing ourselves in terms of trying to help those countries where it hasn’t hit yet, and how do we work with the World Health Organization.”

“There’s going to have to be some kind of a way that the various departments that are involved in national security have to be revived and have to get their reputations back and have to be populated by people who actually know what they are doing,” Albright said. “That part is going to be very important, and I now believe more and more that the issues that are out there require more departments to be involved in them, kind of whole of government approach.”