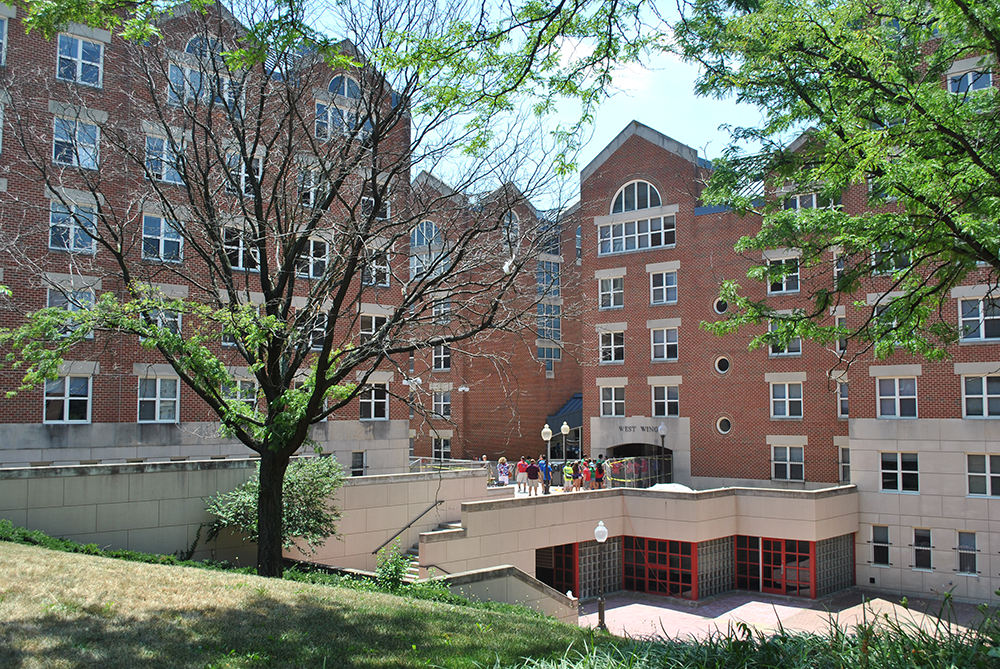 The former Village C Terrace was dedicated this Monday to Fr. Martin J. O’Gara, S.J., a Georgetown faculty member who was killed while serving as a chaplain in the U.S. Air Force during World War II.

O’Gara’s name was previously given to O’Gara Hall, a dormitory, infirmary and office building that stood near the site of the Terrace. The building was torn down in 1984 to make room for Village C residence halls.

O’Gara served as part of the Air Transport Command, which oversaw and carried out transportation of supplies without engaging in conflict. He died in 1946 in a plane crash while flying from India to the United States to be discharged.

O’Gara’s plane caught fire south of the island of Capri, off the west coast of Italy. O’Gara gave up his parachute to a passenger and chose to stay on the plane to give his fellow servicemen time to escape. Eight passengers were saved before the plane crashed with O’Gara still on board, according to a Georgetown news release.

The memorial is particularly significant because there is currently only one veteran memorial on campus, Cristine Pedersen, president of the GU Veterans Association, said.

“There’s one memorial to post-9/11 veterans on campus, but now that the campus has grown, it’s in a really weird spot: a parking lot,” Pedersen said. “That’s why I thought it was really important.”

The push to rename the terrace was initiated roughly a year ago by Rep. Jeff Fortenberry (GRD ’86), a Republican from Nebraska, Pedersen said. Fortenberry serves on the House Appropriations Subcommittee on Veteran Affairs.

In her speech, Pedersen said Georgetown students should reflect on more than just the political consequences of violent conflicts and appreciate the service of those like O’Gara and Capt. Andreas O’Keeffe (LAW ’06), who was killed on the border between Iraq and Syria on March 15.

“As we current Georgetown students rush from class to class, debating foreign policy and adequate responses to various conflicts around the world, we must continually and intentionally engage in discussions on the real human impact of these conflicts and honor the sacrifices of heroes such as Fr. O’Gara and Capt. O’Keeffe in not only formal events such as these but in our daily actions and work,” Pedersen said.

Fortenberry cautioned against progress without consideration of the past.

“Those of us in public office have a responsibility not to just look forward but to think about how we carry forward in time the great traditions and wisdom of the ages,” Fortenberry said. “And a lot of times we take for granted the formative institutions that give rise to right reason, to remembrance, to understanding, to concepts of nobility and sacrifice and dignity, because we’re caught in the tyranny of the urgency of the moment, always reflecting about what could be.”

Fortenberry also expressed hope that the terrace would be a more lasting memorial to O’Gara than O’Gara Hall was.

“I’m glad we have a terrace. That seems to be a little more permanent,” Fortenberry said. “It’s not going to get pushed down, perhaps, for progress. Because I think progress is truly found in the remembrance of those who sacrificed and gave their all.”