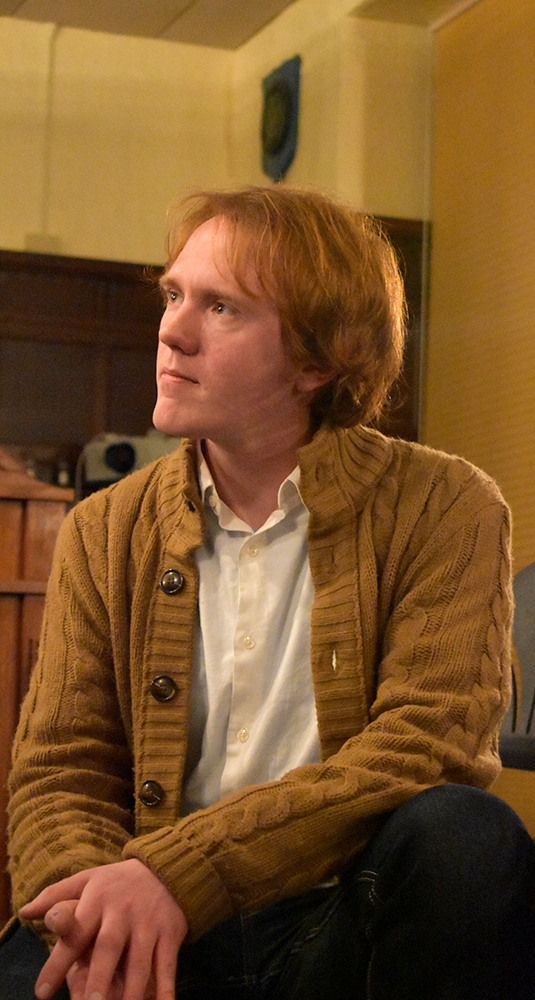 Former white nationalist Derek Black, in his first public event since denouncing his formative community in 2013, argued against the belief that civil discourse alone can combat racism at Copley Formal Lounge last night.

Black, whose father is the founder of the white nationalist website Stormfront, and whose godfather is former Ku Klux Klan Imperial Wizard David Duke, was poised to be the heir to his father’s white nationalist organization before renouncing the movement in the summer of 2013 with a letter posted on the Southern Poverty Law Center website.

“White nationalism supports the premise that multiculturalism is a failure, and that politicians trapped in a multicultural status quo are oppressing white people in ‘their own country,” the letter reads. “I now consider this belief system principally flawed.”

In an exclusive interview with The Hoya following the event, Black said that it is imperative to examine all sides of foundational white nationalist claims.

“Context — I’m more and more convinced — is the largest thing. If you are willing to look at it, all this stuff falls apart,” Black said. “I’d confess, ‘That doesn’t work,’ so I’ll take that block out. And eventually, I didn’t have any blocks left.”

According to Black, the white nationalist community serves as an echo chamber for its own ideology.

“You have everything figured out and you just have to be sure that other people figure it out, too. They’re going to reject it, but you’re right,” Black said. “That makes it easier to go into the world. I mean, I knew everything.”

As a child, Black was a public face of the movement’s future, giving interviews to various media outlets including USA TODAY. Black said that although he grew up engaging with the media, he now perceives overexposure as a distraction from critical thinking.

“As a white nationalist, you can play the news really well,” Black said. “Just do something controversial, and you can get national news.”

Citing the national attention garnered by the annual D.C. conference of the self-described “alt-right” movement, Black said the impact of the white nationalist movement can be easily sensationalized. A video of an “alt-right” conference in Washington, D.C., went viral last November after some attendees were recorded performing Nazi salutes.

“If you weren’t paying attention, you could think this was something that was happening. It was irresponsible,” Black said during the event. “They were trying to be scandalous. They need to give context, rather than doing an ‘Ebola freak-out.’”

Despite the historic role violent action has played in the white nationalist movement and specifically in the KKK, Black said the movement he knew as a child centered on discourse.

“It made it easier for me when I was younger because there was never any violence around me. What I grew up with was going to conferences and hearing people talk about IQ differences between African countries and European countries,” Black said. “It was this pseudo-intellectual thing. I was aware that the news presented it as violent.  I viewed it as really civil discourse, and I didn’t know why people reacted so strongly to it.”

Black said that though he believes that civil discourse alone is not sufficient to combat racism, he was forced to engage in it following his departure from white nationalism because of his unique personal background.

“It’s not that civil discourse wins,” Black said. “That’s not the lesson here. It’s important to talk to people, but the only reason that happened was because it was the biggest uproar of my life. I had to engage with it.”

Black said the political climate during the recent presidential election influenced him to pen an op-ed in The New York Times published last December. In the piece, Black explained the reasons that led to his “flight from white nationalism.”

“Through many talks with devoted and diverse people there — people who chose to invite me into their dorms and conversations rather than ostracize me — I began to realize the damage I had done,” Black wrote in reference to his time at New College of Florida. “No checks and balances can redeem what we’ve unleashed.”

Black added that the political climate during the recent presidential election was the impetus for him to pen the op-ed.

“Maybe America is changing for the worse and they’re not saying racist things, but that’s the difference between white nationalism and political discourse — that they don’t say ‘white.’ You have these little tiny communities having their little tiny conferences, and they don’t have power yet, but their ideas are certainly center stage,” Black said.

Though Black has been removed from the movement in recent years and immersed in academia, he said his familial ties inevitably bind him to the community.

“I can definitely relate to people who went to college and learned some stuff and went back home and suddenly the things they hear make them cringe,” Black said. “I have to wonder whether what my loved ones are doing is damaging the nation more so than the fact that Thanksgiving is uncomfortable.”

Lecture Fund Chief of Staff Aiden Johnson (COL ’19), who organized the event, said that Black struck the appropriate balance between addressing the current political atmosphere and sharing a personal narrative.

“I always kind of religiously keep my personal eyes out saying, ‘what is a story that catches my eye that has a relevant conversation,’ and when I first saw this it hit both of those check marks,” Johnson said. “It was an opportune moment.”

Director of Protestant Chaplaincy Rev. Bryant Oskvig, who attended the event, said that discourse — civil or otherwise — is a key tenet of the university’s philosophy on contemplation.

“He was clear that it wasn’t always civil discourse, but it was discourse nonetheless. So this question of how we engage the engage of ideas becomes really important,” Oskvig said. “Here at Georgetown where we talk about becoming contemplatives in action, we don’t just take the values that we enter into at face value, we actually examine everything and allow those perspectives to be challenged and deepened in many cases through the engagement of ideas.”

Vice President for Student Affairs Todd Olson said that though Black shied away from the idea that all effective discourse must be civil, his message should not be interpreted as a call to violence.

“What I heard him say was, ‘You don’t always need to be polite and considerate,’” Olson said. “I think a lot of people in our community will be digesting that very thoughtful, robust exchange at this program tonight.”

“As a Jew, I know the danger of speaking in echo chambers to people who only think the way we do,” Gartner said. “For someone from one side to break through those walls in a way that honors the others is such a powerful story that I believe is the hope for our future.”