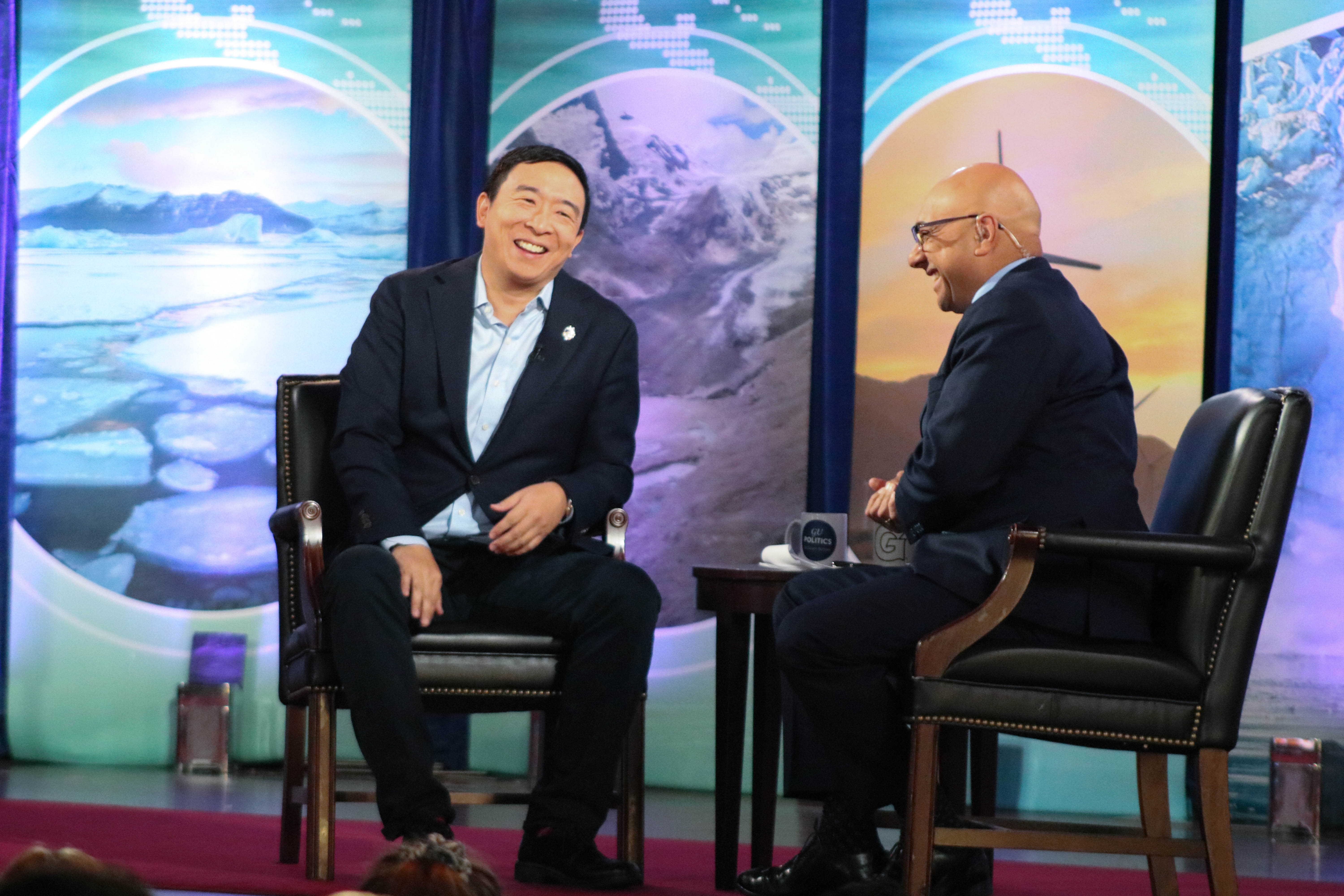 Crowds of enthusiastic students excited to catch a glimpse of seven 2020 Democratic presidential candidates waited in line outside Gaston Hall for the first day of the Climate Forum 2020 on Sept. 19.

Nareg Kuyumjian (SFS ’21), a board member of the Georgetown Renewable Energy and Environmental Network, went to wait in line early in the morning to secure a coveted spot to see Sanders.

“I was super looking forward to the event,” Kuyumjian said. “I lined up from four o’clock in the morning.”

Tickets for the event, which was also livestreamed and broadcast on MSNBC, were made available to students at Georgetown and other Washington, D.C.-area universities, including The George Washington University, The Catholic University of America and American University. Entrance was first-come, first-served, and students began lining up outside Healy Hall at midnight Wednesday night in anticipation of getting a seat in the auditorium.

Andrew Yang, the second presidential candidate featured at the event, was given a warm welcome from the audience in Gaston.

For many Hoyas, Yang was a familiar face: On Wednesday night, Yang played a game of pickup basketball with students in Yates Field House. Students flocked to Yates and crowded around the candidate, lining up to take a photo with Yang.

Patrick Milito (MSB ’23), who challenged Yang to a one-on-one game of basketball, said he enjoyed having the rare opportunity to engage with the presidential candidate on a personal level.

“It was my distinct honor and privilege to ball out with frankly one of the most energizing basketball players I have witnessed,” Milito wrote in an email to The Hoya.

Yang also visited Georgetown’s campus in February to advocate for his flagship policy platform, a guaranteed social security payment for all U.S. citizens over the age of 18. Sanders previously visited campus in 2015 ahead of the 2016 presidential election, speaking on his foreign policy strategy in response to terrorist attacks in Paris, Beirut and Baghdad that week.

The Climate Forum also marked Delaney’s return to campus. When he took the stage, the Georgetown alumnus spoke fondly of the university, sharing that he met his wife April McClain-Delaney (LAW ’89) as a student at the Georgetown University Law Center and mentioned that his daughter, a current freshman, was in the audience.

Outside of Gaston, various activists were stationed across campus, hoping to bring candidates’ attention to certain issues.

Williamson was approached outside Old North by a People for the Ethical Treatment of Animals activist wearing a cow costume and holding a sign reading: “Go vegan or we all die.” Williamson stopped to take a picture with the activist and said she was trying to adopt veganism into her diet. The moment was captured and tweeted by New York Magazine Washington correspondent Olivia Nuzzi.

Well-known political strategist and pundit Kurt Bardella was arrested early Thursday morning after getting into a brief physical altercation with a Georgetown University Police Department officer who tried to bar him from entering the forum, according to The Daily Beast.

The GUPD officer attempted to stop Bardella from entering a stairwell and requested to see his credentials. When Bardella tried to walk past the officer, the officer blocked the entrance, and Bardella slapped the officer’s arm and began to run up the stairs to Gaston Hall, the police report said. Bardella has been vocally opposing the arrest on Twitter.

After the first day of the forum wrapped, student opinions of the candidates and their performances began circulating throughout campus.

The candidates successfully explained the importance of tackling climate change and proposed original policy ideas to address the issue, according to Laura Rockefeller (SFS ’22), president of the Georgetown chapter of Citizens’ Climate Lobby, an international climate advocacy organization.

“Bernie Sanders and Marianne Williamson in particular really drove the urgency message home,” Rockefeller wrote in an email to The Hoya. “I was most pleased to hear Senator Sanders speak specifically about the necessity for a carbon fee and dividend bill.”

CCL Georgetown supports the “Energy Innovation and Carbon Dividend Act,” a bill introduced in Congress in January that would put a fee on carbon emissions and pay the dividend out to U.S. citizens.

Kuyumjian said the forum allowed him to become more educated on each candidate’s platform.

“I was excited to see Bernie Sanders and how his policy adapted from the 2016 campaign,” Kuyumjian said, “and to see what other candidates have to say about their policies on climate change, other candidates that I was less familiar with.”