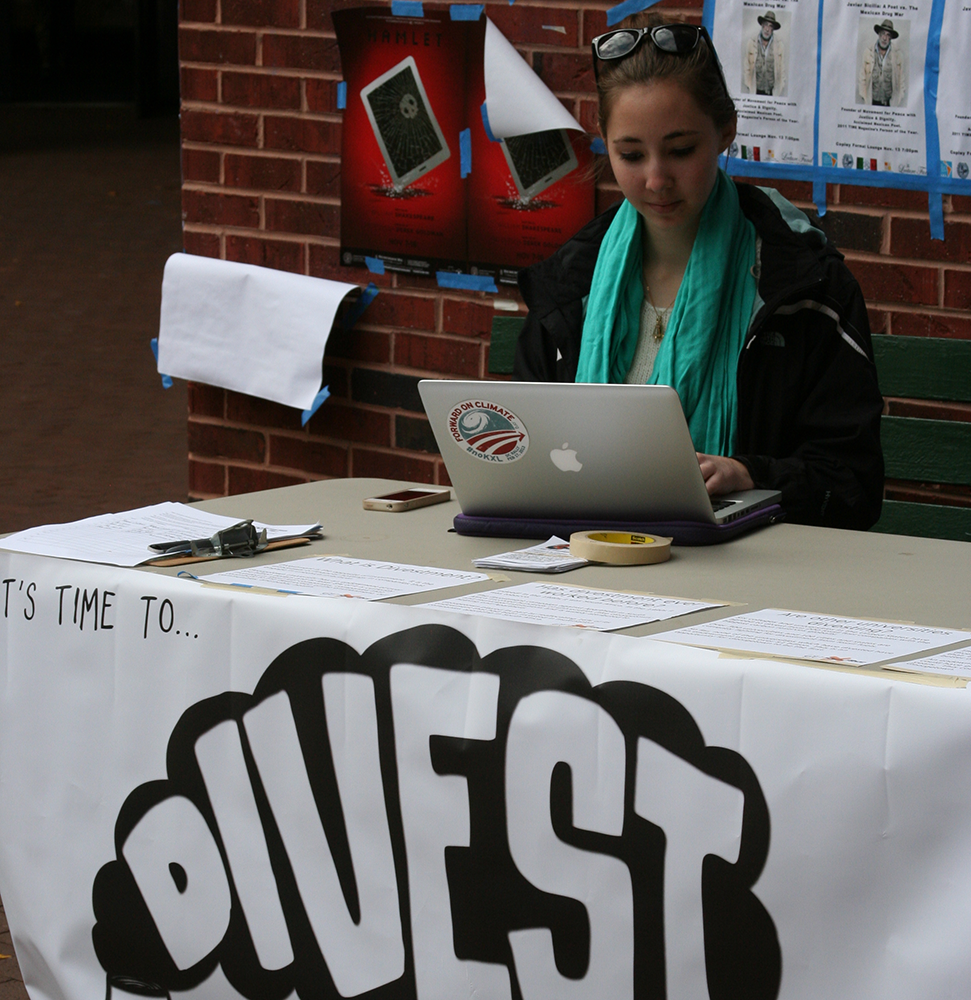 GU Fossil Free announced Tuesday that the Georgetown University Student Association will consider holding a student-wide referendum on whether the university should fully divest its holdings from the top 200 fossil fuel companies on the executive ballot vote in February, marking its first proposal for a referendum since 2013.

GUSA will include the vote on the ballot if GU Fossil Free delivers a proposal with at least 300 student signatures, which must then be passed by a two-thirds vote in the senate. The group released a video Tuesday urging students to vote in favor of divestment in the referendum.

GU Fossil Free received more than 2,500 signatures on a petition from Georgetown students, alumni, faculty and students from other universities in favor of divestment at Georgetown. The group began circulating the petition in January 2013 and will present it to the GUSA senate during a meeting Nov. 15.

The senate must review the proposal 48 hours in advance before the Ways and Means Committee approves a vote on it.

In 2013, the group gathered 1,400 signatures on a petition to hold a student-wide referendum through GUSA. However, GU Fossil Free ultimately decided to postpone the referendum until students were more educated on the issue of divestment. The senate passed a resolution in support of divestment in place of the referendum.

Former GU Fossil Free member Patricia Cipollitti (SFS ’15), who was involved in the group during the 2013 referendum proposal, said that the group should focus on furthering the divestment movement on campus.

“I think GU Fossil Free’s strategy should be educating students and really building a base for a student movement and a community movement,” Elena said. “That building of power within the community will be very effective.”

According to Grady Willard (SFS ’18), GUSA Election Commission vice-chair and GU Fossil Free member, the group hopes a large demonstration of student support will pressure the university to divest.

Willard also said that he will separate his responsibilities in GUSA and GU Fossil Free during the process.

If the senate approves GU Fossil Free’s proposal, students will be able to vote on whether they think the university should divest on the GUSA executive election ballot. In June, the board of directors voted unanimously to divest the university’s endowment from direct coal investment, a decision that GU Fossil Free criticized as inadequate in a statement on its website. The university announced Sept. 23 that it has followed through on its agreement to end direct investments in coal companies.

Throughout the past academic year, GU Fossil Free has demonstrated multiple times in support of full divestment, including storming the Gaston Hall stage during a speech by World Bank Group President Jim Yong Kim in March.

“That [vote] left us with some sort of uncertainty,” Montgomery said. “How do we proceed in the future? What the university has done so far is insufficient. What the referendum does is give us a way to quantify the support we have.”

According to the promotional video released by GU Fossil Free on Tuesday, the group also hopes that the referendum will expand the scope of the university’s commitment to clean energy.

“It is wrong for us to profit from catastrophic climate change,” GU Fossil Free member Samantha Panchèvre (SFS ’19) said in the video. “We have a chance to make our university better.”

GUSA Senate Speaker Enushe Khan (MSB ’17) said she and her colleagues will likely support the referendum.

“I will vote based on what my constituents feel, so I will be voting in favor,” Khan said. “I assume that based on precedent we will also be in favor of this proposal to bring it to the ballot.”

Khan cited the 2,000 petition signatures as proof of the referendum’s relevance to the university community. According to Montgomery, the majority of the signatures are from students.

According to GU Fossil Free member Sabrina Fields (SFS ’18), the majority of the university community is supportive of divestment. She said that educating students on the meaning of divestment and getting feedback is a priority.

“We think it’s important … to get feedback from every direction to see how we can make our position stronger,” Field said. “I think that it’s going to go over really well.”

Field said she feels confident the referendum can pass if presented to the student body.

“The majority of the student body that I’ve talked to, that I’ve had interactions with on behalf GU Fossil Free … is very sympathetic to this cause,” Field said.

“Although the vote will be largely symbolic, a strong showing from the student body will send a clear message,” Goldstein wrote in an email to The Hoya. “It will be incumbent upon GU Fossil Free and all of us who care about climate justice to spend the next few months educating Hoyas about the issue.”