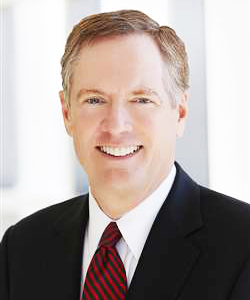 At least four university alumni are slated to join President Donald Trump’s administration as he continues to assemble his cabinet in the weeks following his Jan. 20 inauguration.

The recently-confirmed Secretary of Homeland Security General John Kelly (GRD ’84), Office of Management and Budget Director-designate Rep. John Mulvaney (R-S.C.) (SFS ’89), Secretary of the Navy-nominee Philip Bilden (SFS ’86) and Robert Lighthizer (CAS ’69 , LAW ’73), who has been nominated to serve as a special trade representative, are all positioned to become part of the Trump administration.

The number of Georgetown-affiliated Trump team members is expected to grow, according to Associate Vice President for Federal Relations Scott Fleming.

“There no doubt will be others as the process moves forward,” Fleming wrote in an email to The Hoya.
Lighthizer is the only undergraduate alum appointed to a cabinet-level position. In a Jan. 3 statement announcing Lighthizer as the pick for special trade representative, Trump said Lighthizer has the experience necessary to handle trade negotiations with other nations.

“Ambassador Lighthizer is going to do an outstanding job representing the United States as we fight for good trade deals that put the American worker first,” Trump said. “He has extensive experience striking agreements that protect some of the most important sectors of our economy, and has repeatedly fought in the private sector to prevent bad deals from hurting Americans.”

Lighthizer’s stance on free trade aligns with that of Trump, who said in the statement he is confident Lighthizer will be successful as USTR.

“He will do an amazing job helping turn around the failed trade policies which have robbed so many Americans of prosperity,” Trump said.

The senate has yet to schedule Lighthizer’s hearing.

“Georgetown produces dedicated public servants and we’re honored to have a number of alumni serve during each Administration,” Pugh wrote in an email to The Hoya.

According to sociology professor William Daddio, this trends have continued to grow over the past two decades.

“In the last 20 years there has been a strong and growing connection between the federal government and Georgetown,” Daddio said. “Georgetown in general, and especially the law school and the School of Foreign Service Master’s in Security Studies, is very influential in preparing people for senior government officials.”

There is also potential for university faculty to begin work with the new president as part of the administration. In a Dec. 14 interview with Jacob Brogan of Slate, government and international relations professor Matthew Kroenig said he would be open to the possibility of working with the Trump administration despite criticizing the President’s foreign policy platform in the past.

In March 2016, Kroenig joined over 100 other Republican policy experts in signing a letter condemning Trump’s foreign policy platform and stating that he would not serve in Trump’s administration on the campaign trail. Kroenig was working on Senator Marco Rubio’s (R-Fla.) campaign at the time.

“We are all better off if he can get the best possible people around him and so I think me and many of my colleagues who opposed him in the past would be willing to go in and help with policy if we’re welcome,” Kroenig said.

Kroenig declined to comment on whether or not he has been offered a position within the Trump administration at this time.