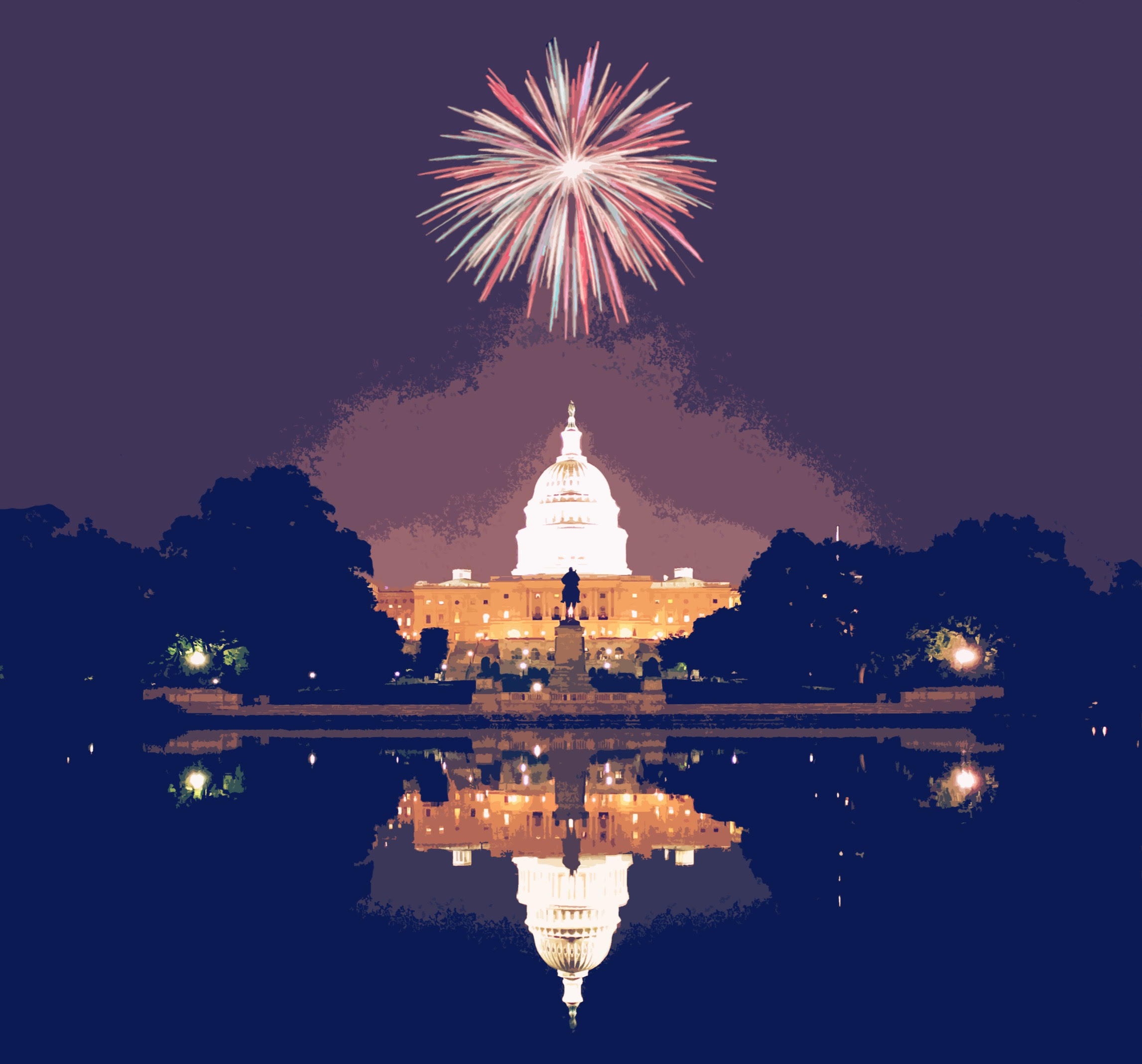 There is no better place in America to celebrate the Fourth of July than the nation’s capital. If you’re here for the summer or just a long weekend, don your best patriotic attire, load up on water and check out our tips to make the most of the day.

Fourth of July Parade
Watch marching bands, decked-out floats and military units make their way through the city during the annual parade on Constitution Avenue. The parade travels from Seventh to 17th Street, kicking off at 11:45 a.m. Make sure to get to the route early to get a spot and bring some snacks and water to combat the heat.

Smithsonian Folklife Festival
Head to the National Mall between Fouth and Seventh streets NW between 11 a.m. and 5 p.m. to get a taste of Basque culture at the museum’s yearly outdoor festival. This year, the food, music and crafts are inspired by the Basque Country in Europe, and will feature musicians and language experts discussing Basque identity. If you’re interested in learning a bit of Euskara, listening to Basque folk music or just eating some delicious cuisine, check out the free festival.

A Capital Fourth
If you love the “Star Spangled Banner” or “America the Beautiful” and want to sing about your patriotic pride, head to the West Lawn of the U.S. Capitol. The musical event has hosted numerous famous performers over the past 30 years, including Stevie Wonder, Aretha Franklin, Josh Groban and Ray Charles. This year, performers from the National Symphony Orchestra, The United States Army Band “Pershing’s Own,” The Choral Arts Society of Washington and more will play tunes between 8 p.m. and 9:30 p.m. Entry is free but the space is extremely limited.

Sweet Treats
With Independence Day temperatures typically rising into the high ’90s, we recommend heading to one of the many ice cream shops in the District for a melty cone. In Georgetown, the best places include Thomas Sweet Ice Cream, Häagen-Daasz and Dolcezza Gelato. If you’re looking to go beyond the Georgetown limits, Momofuku Milk Bar at CityCenterDC is a delicious option — its cereal milk soft-serve, coated in crunchy corn flakes, is a social media star and lives up to the hype.

Washington Harbor
Stay close to campus and head down to the Georgetown waterfront to grab dinner and watch the fireworks from afar. If you’re interested in splurging to celebrate America’s birthday, make a reservation at Farmers Fishers Bakers or Fiola Mare. The views of the Potomac and the John F. Kennedy Center for the Performing Arts are unbeatable from the waterfront steps, so walk down post-dinner for a great show.

H2O
If the heat is too much, there are plenty of watery attractions in the District to visit on the fourth. Dahlgren Fountain is always a close option, but for some better waterworks, head to Georgetown Waterfront Park, Canal Park on M Street SE or Yards Park near the Navy Yard. If you’ve got a bathing suit, D.C. is home to many nice public pools, including Volta Park Pool in Georgetown and Francis Pool on N Street NW.

National Building Museum Summer Block Party
Last summer, the museum opened its wildly popular installment, “The Beach,” filling the entirety of its great hall with white plastic balls for participants to roll around in. This summer’s installment, which will likely be the next social media hit, is called “ICEBERGS.” The exhibit, which opens July 2, replicates an underwater glacial ice field, making visitors feel as though they are submerged 20 feet below sea level. Tickets cost $13 with a student ID.

Red, White and Booze
If you’re in the 21-plus crowd, you can find good cocktails and a great time at a variety of locations around the city. The Embassy Row Hotel is hosting an Independence Day “silent disco” for $20 a ticket at the door, $15 in advance. The rooftop features views of the Washington Monument and the fireworks show. For another party option, hit the water on the fireworks cruise aboard the Spirit of Washington. For $169.99 a person, the cruise provides dinner and an open bar with prime views of the Potomac and monuments.

Fireworks
End your day with a spectacular fireworks show on the National Mall. The show begins around 9:15 p.m., with fireworks launching from the Lincoln Memorial Reflecting Pool and lighting up the monuments. Make sure to get there early to secure a good view, or check out some other spots in D.C. to watch the fireworks from afar. Our favorites include Key Bridge, East Potomac Park, the Georgetown waterfront and the Air Force Memorial.