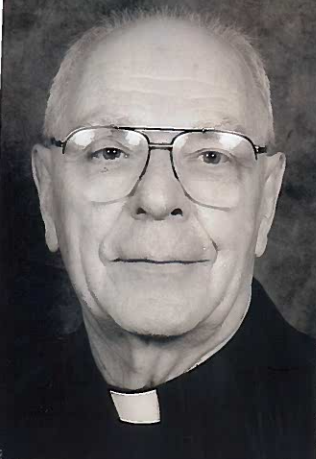 A memorial service was held at Dahlgren Chapel on Aug. 9. Schemel was buried following the service in the Georgetown Cemetery.

Born in Archbald, Pennsylvania in 1925, Schemel first came to Washington, D.C., in 1975 to serve as the minister of the Leonard Neal House, then the minister and treasurer of the Carroll House, both Jesuit communities in the District.

Schemel joined the Georgetown community in 1984 after working as assistant treasurer for Georgetown Preparatory School for one year. At Georgetown, he served as a campus minister and lived in Village C West residence hall for over 20 years as the Chaplain-in-Residence. Schemel went on to serve as the chaplain to the staff when the role was created in 1994, according to Georgetown Magazine.

Schemel said, in his position, that he simply wanted those around him to feel heard.

“I’m like a sounding board or a good will ambassador,” Schemel told Georgetown Magazine in 1996. “As I tell the new employees, I have big ears and I’m a good listener. If you’re having troubles and you want me to do something, I can. If you just want to talk about your family or your job, I’m here.”

Schemel had a motto for his time at Georgetown on how he saw his role in the community.

“Everyone grows physically, and that’s something we can’t control. We grow intellectually through life experience and our jobs. I am here to help people grow spiritually,” Rev. Ron Anton, S.J., wrote in an email to The Hoya, quoting Schemel.

In addition to his official role on campus, Schemel also impacted the community with his work as a confectioner and his regular invitations to home cooked meals.

Schemel told the Washington Postin 1993 that he realized how he could integrate his love for cooking into his ministry in 1975, when he helped the Democratic Women’s Club host a reception for the then President-elect Jimmy Carter.

When the Kennedy Center became unavailable due to a strike, Schemel helped cater the event at the club for over 500 guests, which included President Carter and his family, John Wayne, Bette Davis and at least 15 other movie stars, Schemel told The Washington Post.

When he came to Georgetown in 1984, Schemel began offering home-cooked meals to students multiple times a week in his apartment in order to make students feel more comfortable coming to him with their problems.

“It breaks down barriers,” Schemel said of incorporating food into his interactions with his students.

Schemel said that the dinners helped create stronger relationships between him and the students that came to him, saying that they’ll reach out to him even when they do not have specific problems they want to talk about.

“They call me on the phone and hint around that they’d like to be invited to dinner,” he told the Washington Post in 1993.

Schemel said he discovered his love for cooking after taking a chocolate-making class shortly after moving to the district.

After deciding that the Leonard Neal House was “crying out for special Christmas decorations,” Schemel learned how to mold chocolate Santas, reindeers and Nativity scenes. Schemel even sold 93 pounds of chocolate sculptures in 1989 to help raise funds during the university’s bicentennial anniversary of its founding.

Despite all the use Schemel got out of his confectionary skills, Schemel said he continued because he simply loved doing it.

“I make candies because people like them,” Schemel said. “I get a kick out of it. I don’t consider it work at all. If I’m bored or something is bother me, I get out some pots and pans and start cooking or baking and I soon forget about my troubles.”

Schemel regularly sent out chocolate, get well “cards,” graduation cakes for seniors and used his sweets to brighten others’ days.

Anton said his absence will surely be felt by the community.

“He will be dearly missed by many of us here at the university and throughout the Jesuit community,” Anton wrote.