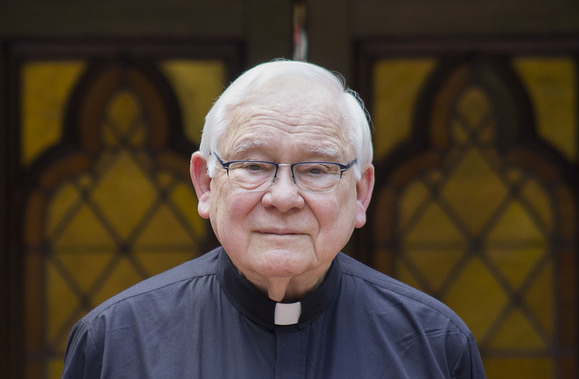 Fr. Howard Gray, S.J., a former interim vice president for mission and ministry at Georgetown University and an internationally recognized scholar in Ignatian spirituality, died yesterday from injuries sustained in a car crash in Michigan.

Gray first joined Georgetown’s Jesuit community in 2007 under appointment as special assistant to the president, charged with leading searches for several positions in the university’s Office of Mission and Ministry. Gray later led the Office of Mission and Ministry in an interim capacity for one year until August 2017 and sat on the university’s board of directors from 1997 to 2006, including as vice chair for the last four years of his term.

Gray died at 12:15 p.m. at St. Joseph Mercy Oakland hospital in Pontiac, Mich., according to a notice of Gray’s death posted by the Society of Jesus. Gray is to be buried at All Saints Cemetery in Northfield, Ohio, his home state.

At Georgetown, a memorial mass honoring Gray is set to take place Monday, May 14, at 12:10 p.m. in Dahlgren Chapel.

Born in Cleveland in 1930, Gray joined the Society of Jesus in 1948 and served in a number of positions of leadership at Jesuit institutions during his seven decades in the society, including Boston College, Loyola University of New Orleans, Fordham University, John Carroll University, the University of Detroit Mercy and the Jesuit School of Theology of Santa Clara University in Berkeley.

In a letter to the university community, University President John J. DeGioia wrote that Gray will be dearly missed by the Georgetown community and the Society of Jesus “as a steadfast friend, extraordinary scholar, and wise leader.”

“Howard lived his whole life in service to others—I cannot begin to express the profound impact he had on the lives of our students and countless women and men in our community,” DeGioia wrote.

Fr. James Martin, S.J., sharing his condolences after Gray’s passing in a Facebook post this afternoon, remembered Gray as “exceedingly well read in Ignatian spirituality, tremendously experienced in the practice of spiritual direction, and highly gifted in reading people’s hearts.”