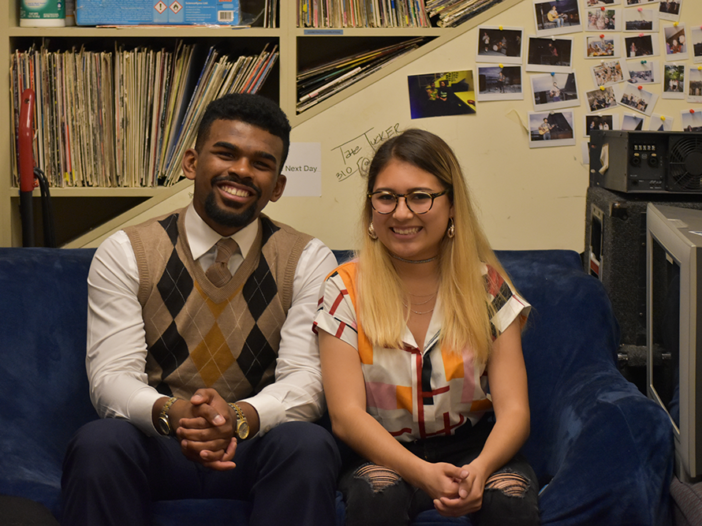 Georgetown University Student Association President Norman Francis Jr. (COL ’20) and Vice President Aleida Olvera (COL ’20) are hard-set on achieving their campaign promise of institutional reform, whether these goals come to fruition during or after their terms as executives.

Focusing on the transparency and accessibility of their administration, Francis and Olvera have worked toward fulfilling their campaign priorities laid out earlier this year. In their term, the executives have attempted to implement change within their positions while also focusing on laying a framework for the president and vice president to come after them.

Francis and Olvera were elected in February with 51% of the vote in the final round of voting. The pair’s election cycle saw a voter turnout of 32%, or 2,185 students casting votes: the lowest voter turnout in a GUSA executive election since 2007, which saw 2,121 votes.

Halfway through their term as GUSA executives, Francis and Olvera sat down for an interview with The Hoya on Oct. 27 to reflect on their administration’s accomplishments, their expectations for the rest of their term and long-standing issues on campus, including the GU272 referendum.

During their campaign for the executive seats earlier this year, Francis and Olvera ran on a platform of “T.R.A.P.”: transparency, reform, accessibility and progress.

To increase the transparency and accessibility of the administration, the pair has implemented two new online platforms for the organization — bitly.com/gusa-library and bitly.com/gusa-comment — for the student body to use.

The executives created the first online platform, which publishes all meeting notes and executive press releases, to distribute their administration’s work, while the second serves as a place to receive student feedback.

“That’s one of the big things that we launched that not a lot of people know about,” Olvera said. “We could probably do a better job of publicizing it. That’s something that we really, really wanted to focus on around transparency.”

Staying true to its campaign priorities throughout the rest of its term remains the goal of the administration, according to Olvera.

“We haven’t lost touch with what we ran on, and I think it’s been really great that we’ve actually continued doing that same work we were doing when we were campaigning,” Olvera said.

GU272 and Relationship With University Administration

Since the outset of their term, Francis and Olvera have been outspoken supporters of the GU272 referendum, which was first designed and proposed to GUSA by the GU272 Advocacy Team, an on-campus student group that raises awareness for descendants. The student referendum, which passed in April, calls on Georgetown University to raise tuition by $27.20, a semesterly fee designated to benefit the descendents of the GU272, the 272 enslaved people sold by the Maryland Province of the Society of Jesus in 1838 to financially sustain the university.

The university announced a new reconciliation initiative Oct. 30 supporting community-based projects with GU272 descendants, including an advisory board designated to back new projects under the advisement of the descendant communities. The initiative will not implement the semesterly fee outlined in the student referendum.

The pair have set monthly meetings with Joseph Ferrara, university vice president and the point of contact for the university’s work on the referendum, according to Olvera. The executives have kept the GU272 Advocacy Team in the loop during these meetings and have invited them to send a representative to the discussions with Ferrara.

The executives support the university’s efforts toward reconciliation but voiced concerns that student perspectives will not be properly considered in this initiative, the pair wrote in an Oct. 31 statement to The Hoya.

“As undergraduate students, we voted to pay for this fund, and we were expecting to be able to have representatives from our body be a part of this fund and its allocation process,” the executives wrote in the statement.

In meetings with administrators, Francis and Olvera have frequently brought the referendum to the attention of the board of directors with the hope that they will prioritize student perspectives on the topic, according to Francis.

“We’ve been very adamant, especially in our meetings with admin, about bringing this up as much as possible, since the students are overwhelmingly supporting this initiative,” Francis said.

While grabbing administrators’ attention can be a challenge, the pair is looking for creative ways to encourage action on the part of the university’s administration by increasing the intensity of their requests, according to Olvera.

“The work that we’ve been doing for it has been, you know, taking advantage of the position that we’re in to bring it up to the people that matter the most,” Olvera said. “When we start yelling is usually the time that people will pay attention. Administration can be kind of a pain to work with, but what we’ve been doing is just yelling — yelling louder.”

Francis and Olvera touted their outreach to a range of student groups, both to work on specific policy initiatives and to discuss how GUSA can help these organizations achieve their goals.

The pair has met in an official capacity with 28 student organizations, including Students of Georgetown, Inc., commonly referred to as The Corp, Georgetown United Against Police Aggression and H*yas for Choice, according to Francis and Olvera. The pair recontacted groups with which they have not yet had the opportunity to meet this week after discussing the topic during their interview with The Hoya, according to Francis and Olvera.

Francis and Olvera encourage their policy chairs and other team members to reach out to relevant student groups to collaborate on initiatives. Currently, their administration is working with Hoya Blue, a student group that promotes student athletics, on an initiative to light Healy Hall blue when Georgetown wins athletic events, as well as with The Corp on an effort to sell nicotine alternatives on campus.

While broad campus outreach to student groups has been a primary goal for Francis and Olvera, improving internal relationships — particularly between the GUSA executive and the senate — is another key aim.

The senate and executive have previously had a sharp divide both professionally and personally, according to Francis and Olvera. The executive pair has worked to bridge that gap, attempting to collaborate on policy and planning social events for both bodies.

Recent discord between GUSA branches, however, has demonstrated that differences still exist. Last week, the senate voted to dissolve the GUSA Fund, an executive-nominated committee that historically distributed a small part of the GUSA budget on an as-needed basis to student groups. Francis and Olvera opposed the move, though they said they intend to sign the bill to honor the senate’s vote.

“While we were really disappointed to see that the senate didn’t agree that [the GUSA Fund] would fall under us, one thing that we are really pushing forward is to see how we can continue the reform through the senate,” Olvera said.

The senate and executive leadership teams have had a positive working relationship this year, according to Senate Speaker Juan Martinez (SFS ’20). But Martinez, who served as GUSA president for six months in the previous term, noted that he could not elaborate on other senators’ experiences.

Martinez encouraged senators to be more engaged in their own policy projects this term, which may contribute to the senate’s independence this year.

“I do not believe the blame for the lack of coordination falls on Norman, Aleida or myself, but rather on the structure of GUSA that currently exists,” Martinez wrote in an email to The Hoya.

In recent months, students have voiced a general distrust and apathy with GUSA, and a student poll by The Hoya in February found that only 2% of respondents rated their trust in GUSA as strong. Francis and Olvera have made conscious steps for reform that they intend to pass on to the next executive, setting a framework for institutional change they see will outlast their term.

While bureaucratic red tape, particularly from the university administration, often limits policy progress, Francis and Olvera hope the changes they have made to the executive’s accessibility and transparency are moving GUSA in the right direction.

“We want student voices to be involved in the conversations that matter,” Francis said.