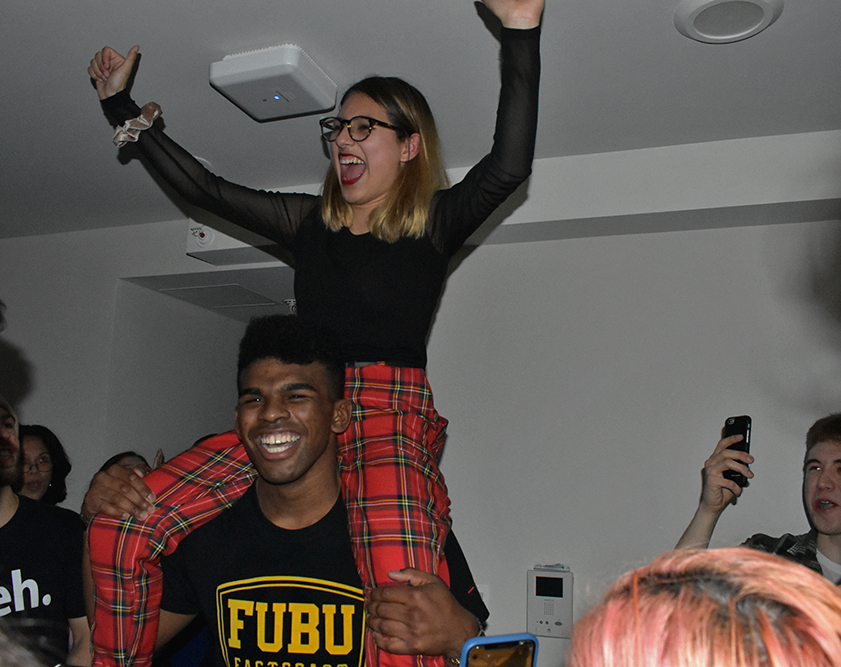 Francis and Olvera received 983 votes — 51 percent of the votes in the final round, closely defeating Nicki Gray (NHS ’20), who earned 943 votes, or 49 percent.

GUSA executive elections operate on a ranked-choice voting system, which eliminates candidates with the fewest votes in each round and redistributes support to the voters’ next preferences.

Francis and Olvera trailed Gray in the first two rounds of voting, receiving 673 to Gray’s 701 votes in the first round. In the second round, the pair had 740 votes in comparison to Gray’s 764.

The winning ticket prioritized outreach to student advocacy groups, running on a platform of transparency, reform, accessibility and progress, abbreviated as T.R.A.P.

Francis said his conversations with students when developing policy were some of the highlights of the campaign season.

“I enjoyed being able to meet and talk to different folks in all the different corners of campus, and basically get a better understanding of the people and issues at Georgetown,” Francis said.

The pair overcame doubts about their ability to lead by fostering discussion with student groups, according to Olvera.

“We had to constantly prove ourselves even though we’ve worked so hard for this,” Olvera said. “We’ve met with so many different organizations and we constantly tried to make sure everyone knew we cared, because that’s just our character.”

Thirty-two percent of the student body voted in the election, with 2,185 students casting votes, the lowest voter turnout since the 2007 executive election, which recorded 2,121 votes.

Low turnout rates could be attributed to students’ apathy toward GUSA, according to GUSA Election Commission Co-Chair Grant Castle (SFS ’21).

“I can only speculate that, given all of the recent turmoil with GUSA, people are just disinterested in the organization, and they don’t see it as relevant or effective, which is probably why they don’t see any difference in who wins, so they don’t care about voting,” Castle said.

Francis and Olvera branded themselves as outsiders willing to bring a fresh perspective to student government, as neither candidate has experience serving in GUSA. The previous two elected GUSA presidents, Nair and Mack, similarly had no prior GUSA experience and ran as outsiders.

Francis works as a student office assistant for the department of African American studies, serves as a tour guide for Blue and Gray Tour Guide Society, is a board member of the Black Student Alliance, and is the program director of Georgetown Radio.

Olvera is the co-director for Georgetown’s Hoya Hacks hackathon, serves as the technology director of Georgetown Radio, and is in the Georgetown Community Scholars Program.

Gray, who ran as a solo candidate after Sam Appel (COL ’20) left her ticket last week, emphasized elevating student advocacy and support for survivors of interpersonal violence in her campaign.

She wished Francis and Olvera the best upon the announcement of their victory and said she would continue to push her platform’s message in the future.

“They’re in it for the right reasons, and honestly I’m amazed that we as a team made it this far,” Gray said. “It’s been an absolute joy to be part of this, and I really wish them all the best. It’ll be a great administration.”

Sina Nemazi (COL ’21) and Roya Wolfe (SFS ’21) were eliminated in the second round of voting, with 552 votes. The pair ran on a platform of improving dining policy, advocating for survivors of sexual assault and empowering women.

Ryan Zuccala (MSB ’20) and John Dolan (MSB ’20), who ran on a three-plank platform of reducing tuition, expediting work orders for housing problems and improving the value of the meal plan, were eliminated after receiving 219 votes in the first round.

The polls opened around 11 p.m. Thursday night and closed 12 a.m. Saturday, following two weeks of campaigning, which began Jan. 25. The campaign season was dominated by outsider tickets and a focus on issues of sexual assault policy and outreach to student advocates.

Francis and Olvera trailed Gray by 6.6 percentage points as of Wednesday evening, according to Wednesday’s poll. Gray was the first choice of 34.7 percent of the 357 self-identified likely voters, followed closely by 28.1 percent of voters who indicated they would vote for Francis and Olvera.

“I am so excited for Norman and Aleida,” Martinez said. “I think they’re really excited, which is good, and I hope they can keep that excitement up so they can begin that process of bringing GUSA under their control and their administration.”

Martinez, who has known Olvera since before freshman year, emphasized that he and outgoing GUSA Vice President Kenna Chick (SFS ’20) would support Francis and Olvera throughout their transition process and beyond.

“We were community scholars together,” Martinez said. “I was like, ‘Even past transition, you can always contact me if you need anything at all.’”

Chick advised the incoming executive to ground themselves in their motivation to run.

“I would say remember your passion, because you’re gonna have some long nights,” Chick said. “Just as long as you stay grounded on the things that you care about and why you ran in the first place, that should get you through.