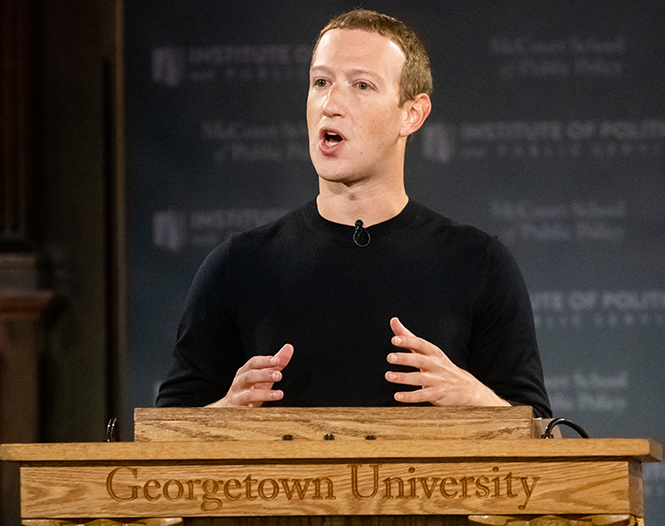 Facebook founder and CEO Mark Zuckerberg stood by his website’s decision to staunchly promote free expression — including by permitting all political advertisements — in a packed Gaston Hall event Oct. 17.

Zuckerberg’s speech at Georgetown University comes one month after Facebook announced the website would not regulate politicians’ speech or fact-check political advertisements ahead of the 2020 presidential election.

Zuckerberg defended the policy in his speech, saying that even if such content is false, it is a matter of free speech to allow the advertisements and perspectives on the platform.

“Some people believe giving more people a voice is driving division rather than bringing us together,” Zuckerberg said in his speech. “More people across the spectrum believe that achieving the political outcomes they think matter is more important than every person having a voice. I think that’s dangerous.”

Facebook was met with criticism from political and business leaders after the Sept. 24 announcement, but Zuckerberg continued to advocate for the policy in his Thursday speech.

“I don’t think it’s right for a private company to censor politicians or the news in a democracy,” Zuckerberg said. “Abandoning political ads favors whoever the media chooses to cover.”

Facebook has faced previous critiques for the company’s policy choices on content regulation in recent years. Falsehoods including unverified information about presidential candidate Hillary Clinton circulated on the website during the 2016 presidential election. Further, misinformation has since evolved to include more pervasive forms of manipulated content, such as deepfakes, on the social media platform, according to The Washington Post: A video altered to make House Speaker Nancy Pelosi (D-Calif.) appear drunk went viral on Facebook in May 2019.

If the website allows advertisements pertaining to specific issues such as health care, immigration or women’s empowerment, politicians should also have a voice in social media discourse, according to Zuckerberg.

“Even if we wanted to ban political ads, it’s not even clear where you draw the line,” Zuckerberg said. “I believe when it is not absolutely clear what to do, we should err on the side of greater expression.”

The event, titled “A Conversation on Free Expression,” was co-sponsored by the Georgetown McCourt School of Public Policy and the Georgetown Institute of Politics and Public Service. Zuckerberg’s address kicked off the new GUPolitics initiative “Democracy in the Digital Age,” a series of public conversations with political, technology and media leaders on challenges and opportunities in the digital age.

The event included a 35-minute speech by Zuckerberg, followed by a Q&A session moderated by Mo Elleithee, the founding executive director of GUPolitics. Questions were preselected from student submissions, as has occasionally been the case at past high-profile events, such as the Climate Forum 2020 and an event on free speech featuring former Attorney General Jeff Sessions.

Zuckerberg’s speech comes at a contentious time for the company, as Facebook is facing criticism not only for its content moderation, but also for its domination of advertising revenue in the sector. Prominent politicians, including presidential candidate Elizabeth Warren and Sen. Ted Cruz (R-Texas), have called for the breakup of the company’s power.

Unless content has the potential to incite harm, it should remain on Facebook to effectively uphold free expression, according to Zuckerberg.

“I believe that we have two responsibilities: to remove content when it can cause real danger as effectively as we can and to fight to uphold as wide of a definition of freedom of expression as possible and to not allow the definition of what is considered dangerous to expand beyond what is absolutely necessary,” Zuckerberg said.

Social media has the capacity to replace the Fourth Estate of conventional news outlets as a vehicle to facilitate public discourse and inform the general population, according to Zuckerberg.

“People having the power to express themselves at scale is a new kind of force in the world, a fifth estate, alongside the other power structures in our society,” Zuckerberg said. “People no longer have to rely on traditional gatekeepers and politics in media to make their voices heard.”

Zuckerberg also addressed Facebook’s role on the global stage, including in China; Facebook, Instagram and other services owned by the company do not operate in the country. Expanding services to China would have aligned with Facebook’s mission of creating a more inclusive and connected society, Zuckerberg said.

However, Facebook never came to a consensus with the country on operating regulations.

“I wanted our services in China because I believe in connecting the whole world, and I thought we might help create a more open society,” Zuckerberg said. “I worked hard to make this happen. But we could never come to agreement on what it would take for us to operate there, and they never let us in.”

Disregarding personal opinion on the divisiveness of social media, individuals must come together to champion freedom of thought, according to Zuckerberg.

“The future depends on all of us,” Zuckerberg said. “Whether you like Facebook or not, I think we need to recognize what is at stake and come together to stand for voice and free expression.”