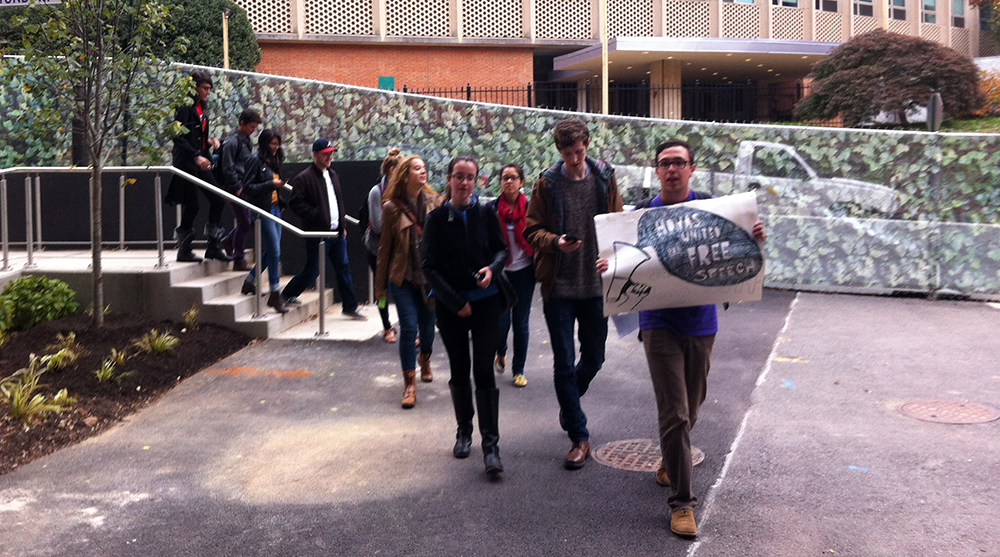 The petition, which has so far garnered roughly 460 signatures, includes demands for the expansion of free speech zones on campus, the diversification of viewpoints included in class curriculum and the expansion of accessibility for students with disabilities.

Around 15 students involved with HUFS met in Red Square and walked together to Olson’s office in the Leavey Center. Before delivering the petition, they stopped in Sellinger Lounge, where they chanted “When free speech is under attack, what do we do, we fight back!”

“We went up to his office, we knocked on his door, he answered, we handed him the petition and we tried to explain to him a little bit about what’s going on in the petition but he said he was on a conference call and then disappeared back into his office,” HUFS founder Vincent DeLaurentis (SFS ’17) said.

Olson said that after receiving the petition, he reviewed the demands carefully and will respond to them shortly.

“There are several issues we will be discussing in the Speech and Expression Committee in the weeks ahead,” Olson wrote in an email. “On the safe spaces questions, I will note that we are committed to preserving the distinctive identities and physical safe spaces of CMEA, the Women’s Center and the LGBTQ Resource Center. We have launched a working group on disability justice, and that group is exploring some of the issues raised here. Current work led by the Provost’s Office, and directly involving students, is exploring the curricular questions that are raised in the petition.”

Olson said that although the university is still considering how to structure its work on diversity issues, it is committed to maintaining three distinct spaces for the CMEA, the Women’s Center and the LGBTQ Resource Center.

According to DeLaurentis, the petition outlined a two-week deadline for a response from Olson.

“We expect him to provide a substantive response to the proposal within two weeks, and if that doesn’t happen or if the response provided isn’t substantive, then we will be forced to continue with our campaign,” DeLaurentis said.

The petition lists seven demands for free speech policy changes: eliminating specified free speech zones on campus in favor of a more universal policy, immediately expanding tabling areas to the sidewalks in front of Healy Hall and around Healy Circle, recruiting a more diverse group of speakers for events on campus, preserving and expanding safe spaces such as the LGBTQ Resource Center, Women’s Center and CMEA, creating a funding system for American Sign Language removing tables used by student groups from the list of “permanent structures” in the Speech and Expression Policy and creating new academic course requirements that highlight underrepresented viewpoints on campus.

The university’s current Speech and Expression Policy permits students to table in designated Free Speech Zones, which include Regents Lawn, Red Square, the HealeyFamily Student Center and the lobby of the Leavey Center.

HUFS, a group of around 30 students that formed to create this petition, consists of students from various campus groups and a number of unaffiliated students. The petition has garnered around 15 club endorsements, as well, from groups including H*yas for Choice, GU Fossil Free and the Georgetown Solidarity Committee.

HUFS member Ida Dhanuka (SFS ’17) said that she joined the group to express her desire for an academic environment that encourages diversity of opinion.

“Basically we’re a group of concerned students that want to expand the protection of speech on campus,” Dhanuka said. “You can’t have an institution of learning without free and open discussion and discourse, that’s really central to being a learning institution and being a Jesuit school I think, being able to talk about issues that come up in an unfettered way.”

HUFS member Lexi Dever (COL ’16) said that her involvement in the campaign was sparked by her affiliation with the LGBTQ community.

“I definitely firmly believe in the right of all students at any university to be able to engage in free discussion and ideas, that’s why we’re here,” Dever said. “Since I belong to a community that previously had been in a marginalized position in this school … I realized that the communities that are ignored harms the Georgetown community as a whole because they don’t get to hear what they have to say. Any form of restriction on free speech on campus is a restriction on our ability to learn and better engage with our beliefs and ideals.”

“In my experience, there are some views that we hear over and over again and they are really protected by the university,” Riordan said. “They’re powered by the university in terms of what speakers we bring to campus, who’s given the most right to free speech on campus, who’s included on our syllabi, what our core classes look like. … I think this gives us a very unbalanced education and Georgetown students deserve better.”

Riordan said that many classes she has taken on campus failed to provide balanced sources on themes and topics of discussion.

“[We hear] a lot of voices of people who have power and have had power for basically all of time. … I’ve been in classes where we exclusively read the work of white men, it needs to be balanced,” Riordan said. “You don’t here a lot of outside voices or outside experience unless you look for it yourself. The dominant culture is very neo-liberal, it’s very pro-capitalism, and there isn’t a lot of questioning of these ideas.”

“The group has not yet reached out to us but we support the aims as they’re stated and think that students forming together to advocate for these issues is important and the only way to make the improvements that we clearly need in our speech and expression policies,” Tezel said.