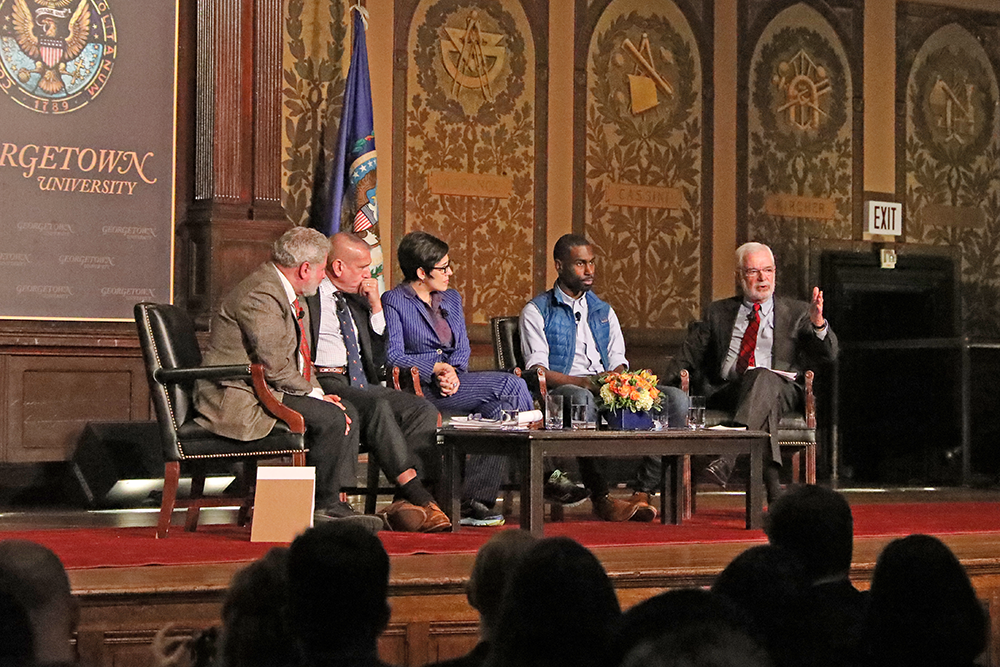 The line is blurred between free speech and speech that is harmful or violent enough to be curtailed, according to four experts at a Georgetown University Free Speech Project panel Monday.

Speaking to an audience that filled Gaston Hall’s lower level, the panelists examined the aftermath of this summer’s white nationalist rally in Charlottesville, Va. The conversation led to little agreement among the panelists, which was what the Free Speech Project intended to achieve in its first public event, according to director and moderator Sanford Ungar.

Violent and racist undertones marked the “Unite the Right” demonstration, which turned deadly when a man drove his car into a crowd of counterprotesters and killed 32-year-old Heather Heyer and injured 19 others. Experts on the law and civil rights, including U.S. District Judge Paula Xinis and Black Lives Matter activist DeRay Mckesson, analyzed the implications of the attack for free speech rights.

Former Charlottesville Chief of Police Timothy Longo, who retired in 2015 after 15 years at the law enforcement bureau’s helm, said the video of the collision struck a nerve in him.

“It’s like sitting in the sidelines, and you’re watching a team that was once yours, and you’re wishing you had to play so things would go differently,” Longo said. “It was powerless to sit there having shepherded the police department and having worked incredibly hard to win that trust where we had lost it.”

Arthur Spitzer, legal director of the American Civil Liberties Union of Washington, D.C., said the protesters were fully within their First Amendment rights to express themselves.

Mckesson contested the view that the protesters were coming to exercise their rights peacefully. He also drew from his experience protesting the death of Michael Brown at the hands of a Ferguson, Mo., police officer in 2014.

“I don’t know how we talk about free speech without talking about the uneven distribution of power and also the unequal enforcement,” Mckesson said. “We saw videos of the white supremacists physically pushing the police — if we had ever done that in St. Louis, we would have been shot.”

In the aftermath of the rally, Gov. Terry McAuliffe (D-Va.) said the police officers in Charlottesville were outgunned, as many white nationalist demonstrators had come to the rally clad in militia uniforms and wielding semiautomatic weapons.

Xinis, who worked for the law firm that represented the family of Freddie Gray in the litigation that followed his death while in police custody, said there was not enough evidence in the district court case against the protesters to justify denying their right to assemble.

Mckesson questioned the need for such evidence given the preponderance of lynchings and hate crimes that white supremacists in the Ku Klux Klan have committed “not a generation ago.” Lynching as an act of racially motivated extrajudicial killing was recorded in the United States well into the 1960s.

“This isn’t a philosophical debate. … This isn’t like a classroom conversation on gay marriage or not,” Mckesson said. “These ideas directly led to real harm to entire segments of the country and to not take that into account is to do an incomplete analysis.”

Xinis also referenced the 1977 National Socialist Party of America v. Village of Skokie Supreme Court case, in which the court held that Nazi protesters were allowed to march wearing swastikas through Skokie, Ill., a town where many Holocaust survivors resided.

Spitzer added that the prevalence of certain ideologies is sometimes blown out of proportion, estimating that there might be no more than 150 Nazis in the country today. In the Skokie case, for example, the march never took place, and demonstrators decided to congregate in a nearby square instead.

When it comes to arguing about potential limits on free speech, Xinis said it is important not to paint every case with a broad brush.

“It’s in the court system that we respectfully have to get away from generalities and leads and talk about facts,” Xinis said.

Longo argued that the conversation on expression protections must not just focus on the federal government.

“The law gets made on the side of the road at 3 o’clock in the morning by a 23-year-old cop who’s got to make a decision,” Longo said. “These cops are now going to have to make a legal conclusion, and they’re not nearly skilled as some of us on this stage to be able to do that, to really understand what it is to incite.”

Ungar, a veteran journalist, wrote in an email to The Hoya that he appreciated the “original and thoughtful analysis” the speakers offered.

“It would have been much less valuable and successful, in my opinion, if everyone had just sat there and agreed with each other,” Ungar wrote. “Campus communities have a particular opportunity and obligation to weigh free speech dilemmas — and to figure out ways to keep the First Amendment alive and well, while also advancing inclusivity.”

The talk was sponsored by the John S. and James L. Knight Foundation, which provided a grant to the Free Speech Project for its founding this fall, and the Georgetown University Lecture Fund.

The event concluded with a discussion of the First Amendment’s role in social justice activism. Spitzer said  the activism that led to the repeal of the Defense of Marriage Act — a federal law that defined marriage as the union of one man and one woman — and marriage equality for LGBTQ couples was caused by people who disagreed with the status quo.

Mckesson contended that despite this, the exchange of ideas should not always be unrestrained.

“There’s no reason why the marketplace of ideas doesn’t have some sort of regulation, so when we think about the First Amendment, it’s not a carte blanche,” Mckesson said. “We all have a role to play to make sure that we don’t let people negotiate history.”