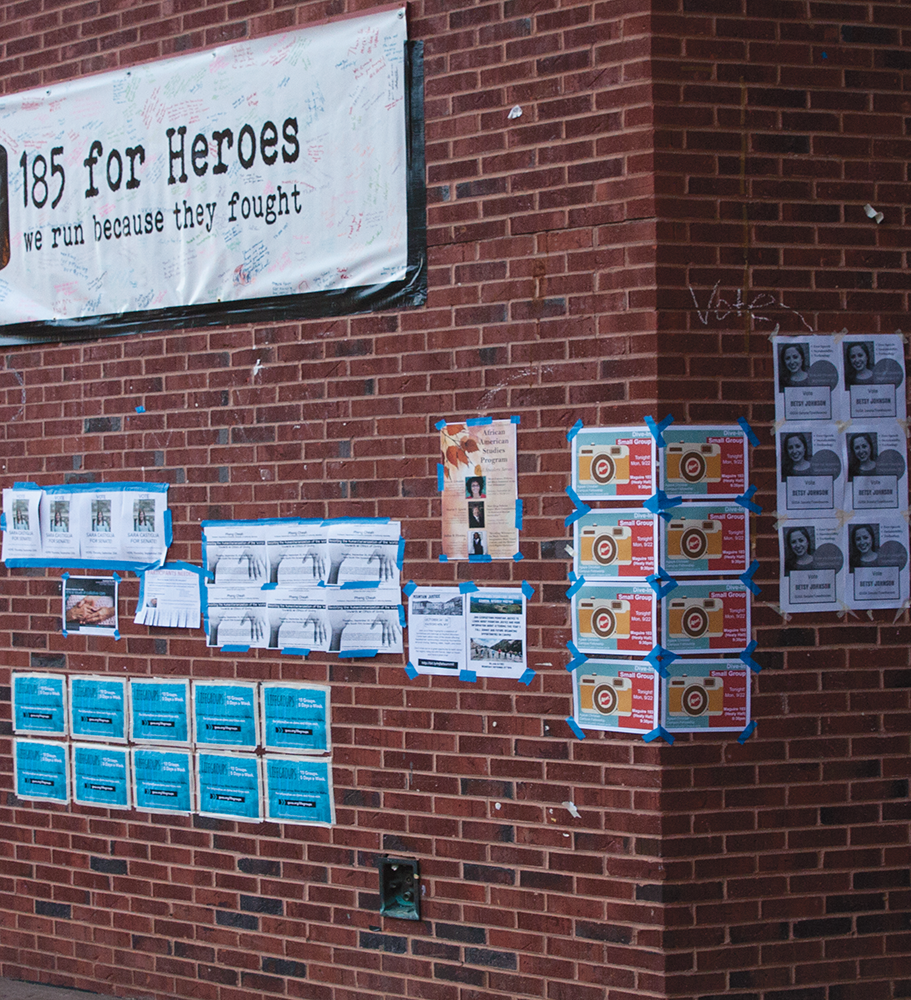 Freshmen represent a majority of the candidates, with 12 running for Freshman North, which includes Darnall and Harbin halls, and 12 for Freshman South, which represents Village C West and New South. GUSA Election Commissioner Pavan Rajgopal (SFS ’15) said that the students running are eager to make changes on campus.

“I think the majority of students running really do care about the issues affecting the university,” Rajgopal said. “This definitely isn’t just a popularity contest, and I think that those candidates who really get their names out there, meet a lot of votes and have strong, substantive ideas are the ones that are going to end up winning, especially in some of the more competitive districts.”

Last year, 77 candidates ran for a total of 28 seats in the GUSA senate.

According to Rajgopal, candidates have adhered to campaign rules, with some small exceptions, such as students hanging posters with the wrong tape or in undesignated locations.

“The campaign has been going really well,” Rajgopal said. “We haven’t seen many rule violations, and where there have been rule violations, people have corrected their behavior really quickly, so it’s been a clean campaign with strong interests and I hope that will carry through during the actual voting on Thursday.”

Rajgopal said that freshmen run in the largest numbers because of both their desire to get involved and their previous high school student government experience. Even if these students lose the election, there are many other ways they can become part of GUSA.

“One problem we had in previous years was people running and not being able to get involved,” Rajgopal said. “Now there’s the Freshmen Executive Council on the executive side of GUSA and there are so many more ways for freshmen to get involved, which makes the campaign season a lot easier to deal with and a lot less disappointing for those candidates who don’t end up coming out on top.”

There are at least three candidates vying for senator positions in each of the upperclassman districts. LXR is the only exception, with just one candidate, Sam Kleinman (COL ’16), running in the election.

Brendan Keenan (COL ’18) is running for Freshman South and plans to work to connect students and the Office of Planning and Facilities Management.

“One of the main problems we have here in VCW and in New South is that we do have faucets in [the rooms of] New South,” Keenan said. “When they start leaking, if you put in a request for maintenance, usually we won’t hear back from maintenance for over two, three weeks. The problem just gets worse.”

Keenan said he is hopeful that he can help make large changes in the interest of the students.

“My hopes would be to actually try and impact the community and not just be in student government for the sake of being in student government, actually to get stuff done and making accomplishments so that way we can make the Georgetown experience better for our class, for the other classes and for the classes that get to come,” Keenan said.

Indra Acharya (COL ’18), who is running at-large, plans to draw from his experience as a student advocate in a refugee camp in Nepal, where he grew up after his family was exiled from Bhutan.

Eric Henshall (COL ’16) is running for the senate seat for Nevils Hall and Alumni Square and hopes to help protect free speech, develop a program for students to receive academic credit for internships and reform student club funding.

“The basic philosophy of my platform is making sure that students and administrators are engaging in meaningful dialogue, and the administration hears our voices and does what’s best for students,” Henshall said.