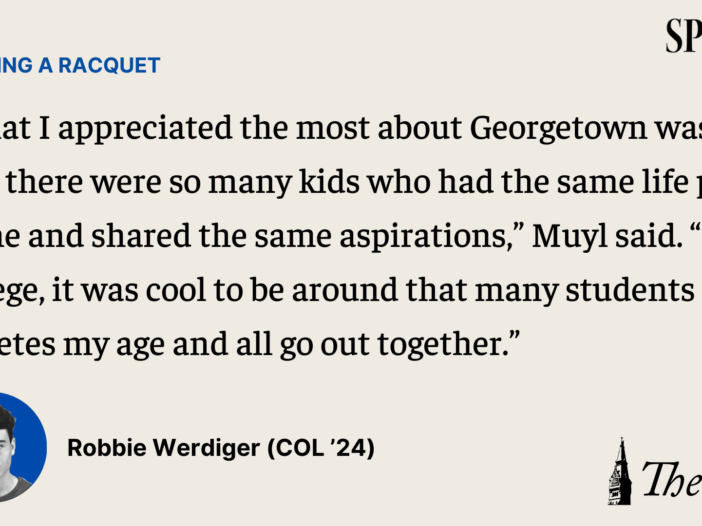 For five semesters, Alex Muyl (COL ’23) battled the same challenges as every Georgetown student. Now, though, he has a new job racking up assists in Major League Soccer (MLS).

Muyl led the Georgetown men’s soccer team from 2013 to 2015. As one of the strongest players on the squad, the New York Red Bulls Academy graduate led the Hoyas in assists during each of his three seasons, totaling 12 goals and 25 assists.

But Muyl didn’t always have his sights set on Georgetown. After leading the U16 and U18 New York Red Bulls Junior Academy teams in goals en route to two national championships, Muyl was unsure whether to go to college or directly to the professional leagues. His mother, an educator, encouraged Muyl to pursue an education and live the college experience.

The soccer prodigy chose Georgetown because it provided a great mix of quality soccer and academics. He also wanted to travel a moderate distance away from his hometown, so the 4.5-hour commute was perfect.

By all accounts, though, attending Georgetown was the right decision for Muyl. In the 2015 Big East Championship, he scored the game-winning goal, helping Georgetown win its first-ever conference championship.

Muyl broke down the aftermath of this moment with The Hoya, discussing how an assistant coach put his accomplishment into perspective.

“You probably just scored the biggest goal in school history,” the coach said to Muyl.

It is clear that Muyl was part of the unit that sparked the Hoyas’ streak of dominance on the pitch. Since his departure from the program, Georgetown has racked up three more Big East titles and a National Collegiate Athletic Association (NCAA) Championship.

Though Muyl was undoubtedly a part of this rise to dominance, he credits the program’s success to Head Coach Brian Wiese and his coaching staff. Muyl expressed his gratitude for everything that brought him to Georgetown: its rich history, athletic achievements and strong academic environment.

“What I appreciated the most about Georgetown was that there were so many kids who had the same life path as me and shared the same aspirations,” Muyl said. “In college, it was cool to be around that many students and athletes my age and all go out together.”

After leaving school, Muyl signed a homegrown contract with the New York Red Bulls professional team and stayed with his childhood team from 2016 to 2020. During that period, Muyl excelled with 12 goals and 19 assists, becoming the 24th Red Bulls player with at least 10 goals and 10 assists. During the 2018 playoffs, a season where the Red Bulls recorded the best regular season record, Muyl scored the winning goal in the second game of the Eastern Conference semifinals.

In 2020, the Red Bulls traded Muyl away to Nashville SC. He was immediately successful, as he appeared in all three Audi MLS playoff matches for Nashville and recorded the game-winning assist against Inter Miami.

Muyl then recalled how it has always been his childhood dream to play in Europe. At 26 years old, the Nashville winger is open to all possibilities. Muyl described himself as an intelligent and dedicated player who can continue to play the game at a high level for decades.

Nonetheless, he always keeps life after sports in the back of his mind.

Muyl needs about 15-18 more credits to graduate from Georgetown as an English major. He took advantage of a postponed MLS season due to the pandemic and took three core English classes over Zoom last year. He explained his path to finishing his time at Georgetown with a degree.

“I want to graduate sooner rather than later. I haven’t taken too many steps to figure out a post-career life, but the question is always in the back of my mind, especially when things aren’t going my way on the field,” Muyl said. “It’s a question I never really had to ask myself because I’ve always had soccer, but I’m now trying to find new passions I enjoy.”

For now, though, Muyl is excited about where his Georgetown journey has led him.

“I am super happy in Nashville and can’t see myself anywhere else at the moment,” Muyl said. “We are grateful to have a passionate fan base who fill up the stands of Geodis Park, the largest soccer-specific stadium in North America, which is awesome to play in.”

Robbie Werdiger is a rising junior in the College. Causing a Racquet appears online every other week.