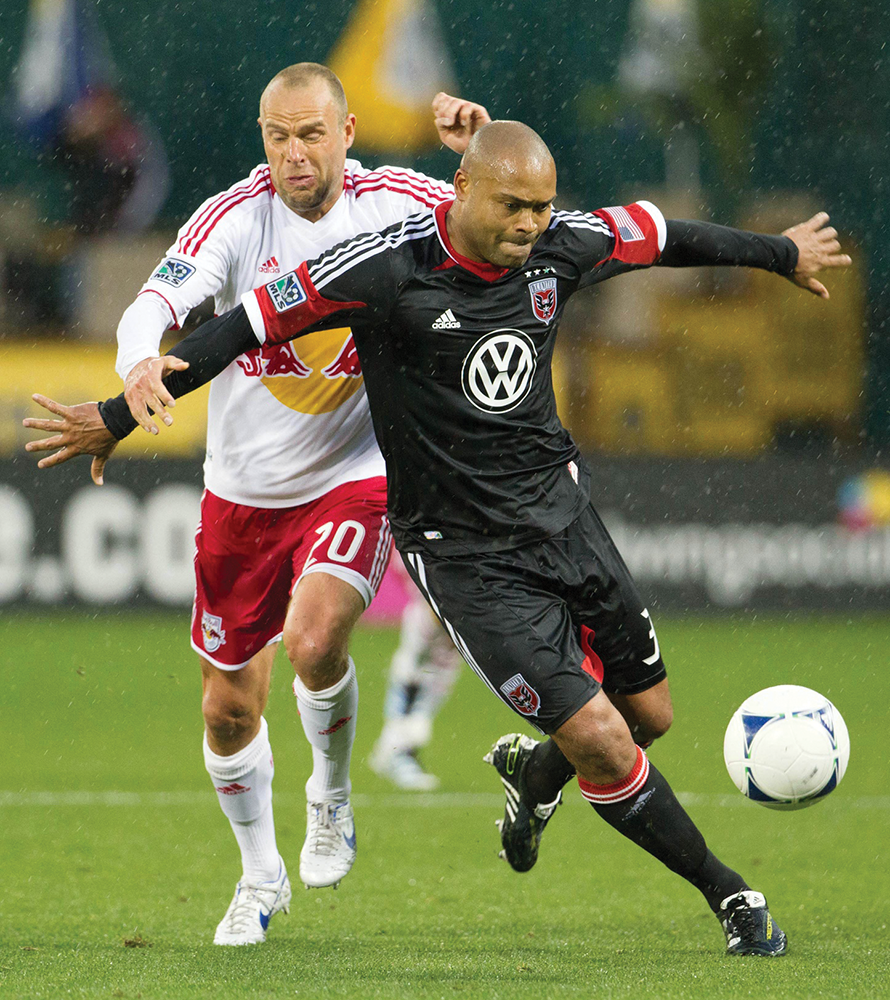 Following a career spanning six teams in four countries, scoring an MLS Cup-winning penalty kick in 2009 and facing off against the likes of Arsenal and Real Madrid inUEFA Championship League games, Russell knew his time in professional soccer was through. After officially retiring May 15, however, he began his new career in earnest at Georgetown in its post-baccalaureate pre-medical certificate program.

When Russell, 34, announced his retirement from soccer, the decision had been in the works for a while. So, too, had his dream of pursuing medical school. A self-professed science nerd, Russell accepted a full scholarship to play soccer at Duke University in 1996, harboring plans to pursue the pre-med track. But he underestimated the demands of Division I soccer and his rigorous science courses.

“I got to Duke, and I knew right off the bat I couldn’t handle playing and going to school as a pre-med student,” Russell said. “I’m not one of those guys who immediately looks at the page and is like, ‘Oh I get it.’ I need to grind through it.”

Because his family was not in a position to pay the steep tuition, Russell could not afford to lose his scholarship. He decided to drop his pre-med courses and change his major to sociology.

“I knew I had to get the grades in order to keep the scholarship, and so I made a decision then to switch,” Russell said. “It was perfect for me because it led me to a path of playing professional soccer, and I’m not going to complain about that.”

The idea of going to medical school, however, always remained in the back of his mind. During his seasons with Real Salt Lake and D.C. United, Russell interned with the team doctors and got a feel for the everyday work of sports medicine personnell. It is these doctors whom Russell credits for encouraging him to pursue med school.

“It really helped that they had already been through med school, and they still felt like it was possible for me — that was a big confidence boost,” he said.

But it was his father-in-law, an experienced emergency room physician, who gave Russell the final push he needed to take the decisive step and apply for post-baccalaureate programs.

“When it came time for me to make the decision and I was like, ‘I don’t know if I’m smart enough; I don’t know if I can do all of this,’ he’s the one that said, ‘It’s possible.’”

Though Russell may have second-guessed his qualifications, Dean Edward Meyertholen, the director of pre-health programs at Georgetown, said Russell’s application revealed a strong candidate.

“It’s just like applying to everything else, and he had a resume that was more than good enough,”Meyertholen said. “We wouldn’t have accepted him if we didn’t think [that].”

Being accepted to Georgetown’s program wasn’t just good news for Russell: He can continue to live with his wife, Tiana Russell, from whom he had to live apart for eight years due to the demands of their respective careers.

“It’s an amazing program,” said Tiana, a lawyer at the D.C. law firm Arnold & Porter. “Georgetown was definitely his first pick, and being here in D.C. … is a good thing for us personally, too,” she said.

As a post-bac med student, Russell faces challenges beyond the normal rigors of the coursework. More than a decade older than the majority of his classmates, Russell is simply at a different place in his life than his counterparts.

“I think it’s happened to me twice where I’ve walked into the class and someone has been like, ‘Are you the professor or the TA?’” Russell said.

Furthermore, because he has been out of school for more than 10 years, his foundational knowledge of basic concepts is rusty — or forgotten altogether — making it that much more difficult for him to learn the new material.

So far, Russell’s hardest class has been biology. Though he said he “bombed” the first test, his healthy dose of perspective helps him stay optimistic.

“[One] thing I’ve learned in my old age [is] if you get a bad grade, you can kind of step back and it’s not the end of the world. … The same thing happened in [General Chemistry 1], where I bombed one of the exams and ended up getting an A in the class,” Russell said, laughing ruefully. “I’m hoping I can stick to that route.”

Though Russell says that some professors aren’t willing to provide the extra level of support to the post-bac students, others go above and beyond. One such person is Meyertholen, who runs biology review sessions for the students.

“He’s the head of the committee for the post-bacs, and he doesn’t have to do [that] anymore, but he does,” said Russell, who has attended three of the review sessions.

Russell’s admiration for Meyertholen grew when he found out that the dean suffered from Kennedy’s disease, a rare neuromuscular condition.

“It’s a very inspiring story,” he said, noting that there is a half marathon run Oct. 5 in honor of Meyertholen, with all proceeds going to the Kennedy’s Disease Association.

Though Meyertholen does not know of any other professional athletes who have completed post-bac medical studies, he believes the program is setting all students up for success.

“As far as I can tell, they have the same acceptance rate as other undergrads,” Meyertholen said. “That’s very much a reflection of the people we get. The people who come to Georgetown are smart people.”

Tiana thinks that it will be his experience as a soccer player that will make Russell a success as a doctor. From dealing with his own injuries, to performing under pressure, his life experiences seem to have been leading him to a career in medicine.

“He’s had seven surgeries. Going through that process, you learn empathy just about how recovery works and what it’s like to go through those sorts of situations. … If he [decides] to go into more of a high-pressure field, he’s amazing under pressure. He’s naturally like that, but 13 years of playing professionally has honed that even more.”

When Russell sat down for a meeting with D.C. United Head Coach Ben Olsen in May, Olsen said, “We need you to start getting ready — we need you.”

Although Olsen knew that Russell planned to go back to school after his soccer career, he didn’t expect him to leave before the season was over. Russell had played in only one regular season game up to that point, and the clock was ticking on his post-bac applications, but that didn’t stop him from feeling a measure of guilt.

“I was on the team at the beginning of the season, and the season is still going on. Personally, it felt like I was jumping ship, especially since the team wasn’t really doing well,” he said.

“I knew that [going back to school] was his plan after soccer — I just didn’t know it was going to happen this year,” Pontius said. “But everyone supported him in his decision. It was time for him to move on and begin the next phase of his life, so we’re excited for him but sad to see him go at the same time.”

For the team, who struggled to a dismal 3-21-6 record this season, Russell’s retirement had an immediate effect.

“It’s had a huge impact, not only on the field [but] in the locker room — he was a leader,” Pontius said. “He’s played in a number of different leagues around the world and in some very big games, so his experience is pretty hard to come by. I think we lost that more than anything, and he’s obviously a fantastic player, too.”

In Russell, the team lost more than an experienced player and leader, but a friend. Russell laughed remembering the nicknames he accumulated over the years. “The Water Buffalo” was one of the most popular — and apt — given his hulking build and routine of soaking in the hot tub before training. When he shaved his head and grew out his beard, his resemblance to the UFC fighter earned him the moniker “Kimbo Slice.”

“In the end, right when I was about to retire, everyone just called me ‘Doctor Russell,’” he said, with a slightly sad smile.

“I definitely want to try to make it. … A lot of emotion there,” he said.

For Russell, retirement has not fully sunken in yet.

“I literally stopped playing three months ago, so it’s still fresh. I kind of feel like I’m still in off-season sometimes,” Russell said. “I do miss being a part of the team.”

Success of a Different Kind

Robbie Russell has never been known to shy away from a challenge. The son of a diplomat, Russell grew up playing soccer in both the United States and Ghana, where he was born. Abroad, however, his soccer skills lagged far behind those of his Ghanian counterparts. According to Russell, they tolerated his presence on the field only because he was one of the few people in town who owned a soccer ball.

“Getting my ass handed to me was my first real experience with the game,” Russell said. “After that, or so my brother tells me, I tended to approach the game with a lot more intensity.”

If all goes according to plan, Russell will finish the post-bac program next summer, take the MCATs and begin medical school in the fall. It won’t be easy, but if Russell brings the same intensity to his studies that he brought to his soccer game all those years ago, success seems nothing short of inevitable.