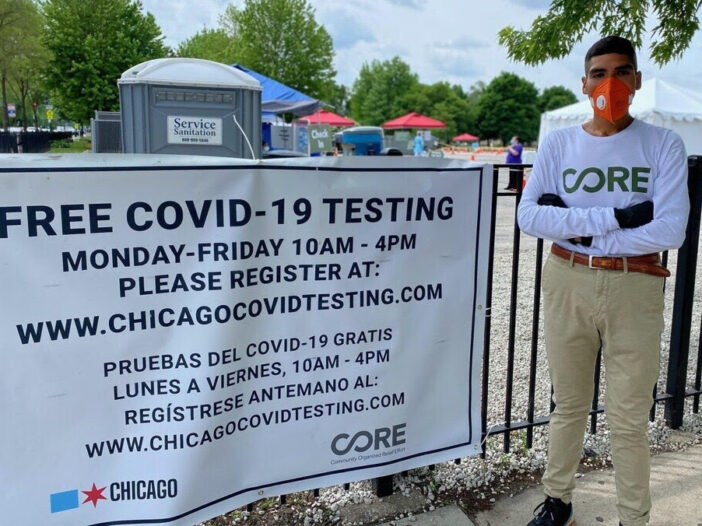 While Americans across the country spent much of the spring at home under lockdown orders, Miguel Blancarte Jr. (GRD ’18) found himself in a new line of work: He set up, managed and operated a community-based coronavirus testing site in his childhood neighborhood in Chicago.

“I traded in an office, a cushy comfortable chair and books around me and laptops, for example, for a field filled with orange cones and yellow caution tape and a couple port-a-potties,” Blancarte said in an interview with The Hoya.

The testing site, located in the Little Village neighborhood on Chicago’s southwest side, is one of six city-run testing sites maintained in partnership with organizations Community Organized Relief Effort, an initiative founded by actor Sean Penn to provide free coronavirus testing in communities across the country, and Curative, an organization that works to bolster testing site capacity with precise easily administered oral fluid tests, according to an announcement by Chicago Mayor Lori Lightfoot (D).

While he was living in Merida, Mexico, 10 years after completing undergraduate studies at Brown University, Blancarte enrolled in Georgetown University’s Master of Arts in International Business and Policy program. Though the degree was globally focused, when it became clear there was a need to bring more testing to his local community, Blancarte said the education served him well.

“The program that I did through Georgetown honestly really did prepare me for something like this, something that is very much unprecedented,” Blancarte said. “It’s a testing facility that is outdoors, it’s emergency. You have to respond to the different situations that arise and there’s really no playbook, there’s no guidebook, there’s no anything.”

Blancarte’s testing center was borne out of necessity. As of June 23, Chicago’s 60623 zip code, where Little Village is located, reported an average of 39.7 cases of COVID-19 per 1,000 people, the highest rate among all Illinois zip codes, according to WBEZ.

After flying back to Chicago from Mexico though Miami in March, Blancarte developed COVID-19 symptoms and called 311 to find a testing location nearest to where he lived. The city informational line directed him to a hospital that was a 34-minute walk away, but when he arrived there, hospital staff had to turn him away. There were no tests, Blancarte said.

“I think it’s a shame that it has to be a local initiative, that it has come down to mayors and governors to get citizens tested, to get people tested,” Blancarte said. “It’s not only about one group or one demographic or certain demographics, it’s about every single human being and the fact that the federal government wasn’t able to roll out a comprehensive plan for free coronavirus testing.”

For Blancarte, his Jesuit education at Cristo Rey Jesuit High School in Chicago and his time at Georgetown ingrained in him a commitment to social justice, he said.

“I think the most fundamental component of being enrolled at Georgetown that even got me to accept this new position is being a man for others,” Blancarte said. “This COVID testing site is in my community and I’ve been so much about my community in the past, that I said, ‘What’s a better way to pay it forward, to help my community, than accept this role and step up to the plate, step up to the challenge?’”

Now, at the testing site Blancarte manages, which sits in the parking lot of his old elementary school across the street from his childhood home, CORE offers tests to anyone who wishes to receive one, he said.