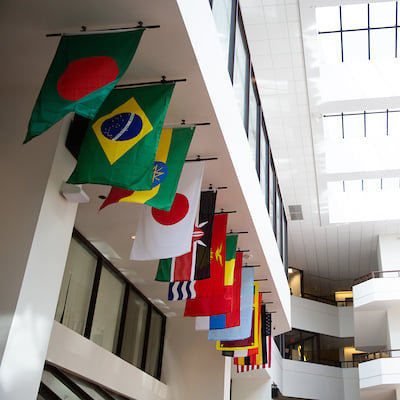 Runzhong Xu (COL ’21) is joining his classes from his home in China, half a world away from the United States and 12 hours ahead of Eastern Daylight Time.

While dealing with the isolation and loneliness of quarantine, the significant time difference is also giving Xu mounting exhaustion and sleep deprivation. The transition to online learning has left him more alone than ever before, creating a very different feel to the campus atmosphere he knows and loves, Xu said.

“Moving to online courses has limited the social interactions I can have. Most of the time I just stay in my room and do the work, and after that, I have to eat by myself as well,” Xu said in an interview with The Hoya. “The social interaction is very minimal during the weekdays. And that’s very different from being at Georgetown, where even if you are working late there is still a chance for social interaction.”

Despite Georgetown University’s attempts to accommodate and create a sense of community while most of the student body is hundreds of miles away, international students like Xu have had their entire lives turned upside down.

After Georgetown shut down in-person learning in March, Harriet Bailes (COL ’22) returned to the United Kingdom, where she faces a 5-hour time difference and spends much of her nights on Zoom.

Large time differences force international students to develop unsustainable sleep schedules in order to attend classes and club events, according to Bailes, who often has meetings that require her to be up in the middle of the night.

“My econ recitations don’t finish until 2:30 in the morning. Tomorrow, I have a club meeting at 3 a.m., so going to bed at any reasonable time is legitimately impossible if I want to go to my classes and do well or turn up to clubs as well,” Bailes said in a video interview with The Hoya.

Time differences can also make it difficult for international students to maintain normal social lives and schedules at home, according to Bailes.

“I don’t really get to see any of my family and friends because they’re obviously functioning on a completely different timezone to me,” Bailes said. “I just spend large chunks of my day in my bedroom, basically trying to not wake anybody up.”

Luca Guerrini-Maraldi (MSB ’24), another student from the U.K., shares Bailes’ frustration. Although Guerrini-Maraldi, who is currently living with family on Long Island, does not have to deal with time differences, attending a school that so heavily emphasizes community and then not having that in-person experience can feel trying.

“It’s very difficult to think I’ve started a new school — let alone a new university — that precedented so primarily on community and community values, and not to have any community,” Guerrini-Maraldi said in a video interview with The Hoya. “I understand the university has made a considerable effort, but it’s obviously not felt like the real thing.”

Guerrini-Maraldi recognizes, though, that he is fortunate to be able to live in the United States for this semester since many international students do not have that privilege.

“I’m one of the lucky ones,” Guerrini-Maraldi said. “I am an individual who has a passport and who has a native family based out here in the States. I have friends out here because I have spent three months a year out here for years, so I have very solid foundations here, ones that I know a lot of my family and friends from the rest of the U.K., Italy and Europe don’t.”

While the situation is less than ideal, it is an improvement from last semester, when clubs and class meeting times had to quickly be adjusted, according to Elisabeth Cajurao (COL ’23), who faces a 12-hour time difference joining classes from her hometown of Manila, Philippines.

“I think one good thing about this semester is everyone was already anticipating it, so they are more aware of these differences and they’re more accommodating to people, which is super nice,” Cajurao said in a video interview with The Hoya.

In addition to students struggling to make ends meet in the world of online learning, adjusting to a whole new setting has forced some of Georgetown’s faculty to find new ways to teach students who are joining virtual classes from all across the world.

For Bailes, while some of her classes are offered asynchronously, some still depend on her attendance for her to succeed.

“As an economics student, recitations are heavily encouraged but not mandatory, but it’s really just a time for you to go and ask the TAs a bunch of questions,” Bailes said. “So if I need any sort of help, I need to go to a recitation, but obviously I can’t do that when it’s done asynchronously.”

To ensure international students in his classes have access to the same resources as his students in the United States, philosophy professor Henry Richardson has added a fixed office hour from 9:30 to 10:30 p.m. EST while remaining available by appointment, Richardson wrote in an email to The Hoya. Sessions at this hour are generally more accessible for international students dealing with time differences.

Richardson teaches “Political and Social Thought” to over 100 first-year students as well as a small, upper-level undergraduate elective. In each class, at least one-fifth of his students are from outside of the United States, with about 11% of his students in his larger class from Asia alone, according to a preclass survey Richardson sent out.

As difficult as this semester has been, Richardson is grateful for the opportunity to reconsider and restructure his curriculum, since the virtual learning environment requires certain class materials to be prioritized over others.

“Painful as all of this complication and additional work is, I am sorry that I was not forced earlier in my career to do something like this,” Richardson wrote. “This logistical need to decompose the course into various bits, which forces me to distinguish what I want to reserve for the precious synchronous time and to determine how I would like to sequence each element has enabled — well, again, forced — me to think more explicitly about pedagogy than I had.”

Some professors have found it necessary to put more consideration into the formatting of lectures this semester, according to government professor Lise Howard, whose “Introduction to International Relations” preclass survey revealed that nearly 10% of her students are joining from outside the United States.

“I’ve had to be much more intentional about how to teach a large lecture and keep everyone’s attention. It takes a lot more time. I have not spent this much time on ‘Intro IR’ since I first started teaching it,” Howard said in a video interview with The Hoya.

Coming to the United States

Georgetown’s July 29 decision not to allow first-year students on campus was a reversal of its original plan released July 6 to welcome approximately 2,000 first-year and select upperclassmen students to campus. This rapid turnaround left first-year international students with less than a month before the start of classes to adapt to their new reality.

Following a July 6 decision by Immigration and Customs Enforcement’s, students on M-1 or F-1 visas studying at universities that only offered online learning for the fall semester were barred from entering the country unless they took a hybrid course load. To combat this ruling, Georgetown offered some hybrid classes to allow a limited number of students to obtain a visa and enter the United States. ICE later rescinded its ruling July 14, following eight federal lawsuits and opposition from hundreds of universities.

Getting her visa this year to be able to live on campus was an intensive process, according to Elisabeth Koch (SFS ’24), an international student from France.

“It’s a nightmare, though it’s not Georgetown that made it a nightmare. I think it’s the U.S., where basically, in normal times, it’s a lengthy process to get a visa,” Koch said in a video interview with The Hoya. “You have to get into university, and after you think you’re done, there’s actually a ton of paperwork to do and an interview to do to get your F-1 visa. This year, it was a whole thing where everything was coming down to the very last hour.”

Although Koch does not regret her decision to live on campus, it was difficult to make such a last-minute decision and have to undergo the move-in process alone, she said.

“My leaving for college was my parents taking me to a deserted airport and saying bye, which was really, really weird. I thought they’d get to come to campus together, so I think that aspect of not being able to share this moment with my family was really hard,” Koch said. “I do think I made the right decision coming here because I am doing so much stuff I wouldn’t have ever been able to do in Paris, though.”

Guerrini-Maraldi shares Koch’s view on being rushed to choose to come to the United States. While he does not regret the decision, he still misses his family a great deal, he said.

“I don’t have any regrets about my choice,” Guerrini-Maraldi said. “I have a slight distaste for the way I had to make my choice. If I were at university, I wouldn’t have been [home] anyway, so I have that sort of peace of mind to know that I don’t regret my decision to be out here. But I do often think, if I had the time schedule, I definitely could have been with my family, who are pretty much all in London.”