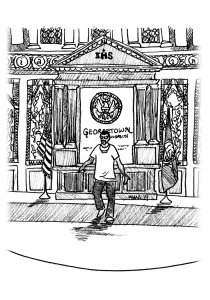 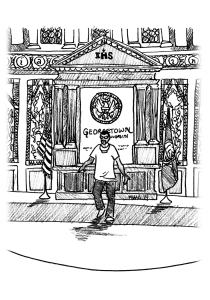 Dear Mr. West: I would like to cordially invite you to be interviewed at Georgetown University, in one of our historic campus venues.

Some readers will undoubtedly mock this as frivolous fan mail instead of an appeal to a leading social pioneer, which is exactly why I urge you to accept the offer.

While promoting the Yeezus Tour this winter, you addressed an array of profound cultural controversies, ranging from marginalization of artists and classistantagonism to the mental enslavement that pervades society through the shackles of conformity. Yet, too many Americans have either misunderstood that message or failed to hear it in the first place, and I believe your remarks have scratched the surface of their potential to stir and shape public discourse.

Only so much can be accomplished with interviews at music radio stations and on TV talk shows, partly because those hosts incessantly divert to tabloid headlines. At Georgetown, students would be eager to engage you in a deeper discussion of these provocative but pivotal issues. You have said before that some people are raised by their parents to understand your message while others are not. I believe those on campus are more receptive and impressionable than you give them credit for, and this interview is a chance to prove that point.

We should discuss the racist and classist aspects of your professional frustrations. You have been marginalized by the fashion industry because you are a black celebrity, and the idea of a modern Renaissance man is dismissed by corporate insiders. The public still fails to see that your desire for creative and economic empowerment is not driven by materialism or greed. After all, you once said, “We buy our way out of jail, but we can’t buy freedom.”

We should discuss the failure of music critics to properly recognize high-end artistry. Cultural criticism has a social function, yet throughout your career you have identified the racial undertones and institutional biases that undermine reviews and award shows. Instead of appreciating that systemic unfairness, people continue to fixate on the Taylor Swift moment without understanding its real implications.

We should discuss the common inability to differentiate ambition and confidence from egoism and arrogance. People often attack dreamers because of their own insecurities, and you have noted the way we adopt self-imposed limitations in life when we are taught to think less of ourselves. When one radio host heard you complain about classist marginalization and asked, “Why don’t you just work at Walmart?” he represented a tragic misunderstanding of what you are out to accomplish.

In a column last October, I wrote, “At a time when lackluster music quality, corporate influence and waning interest in the arts are so prevalent, it’s disheartening that someone like Kanye West is dismissed, not celebrated. Those who say he should be content with fame miss the direction of his motives; those who say he’s an egomaniac miss the purpose of his passion.”

The confusion I referenced extends beyond bloggers and YouTube commenters to people such as South Carolina State Rep. Bakari Sellers (D), who said in a radio interview in New York City last month, “I don’t think there’s a political statement that Kanye West can make that I would entertain.”

People like President Obama or Sellers should be among your biggest allies, and the Georgetown platform can help further the credibility of your social commentary to a broader audience.

“Just the fact that I’m willing to lose is an inspiration to try” is motivation enough for me to extend this invitation. When you reach out to people like former Google CEO Eric Schmidt for support, you’ve noted that even Michelangelo needed the Medici family. Well, even Steve Jobs benefitted from WalterIsaacson.

Your debut album “The College Dropout” was released 10 years ago. Maybe now is the perfect time to return to campus. We would be honored to have you.

Danny Funt is a senior in the College. He is the former editor-in-chief of The Hoya. Calling My Shot appears every other Friday.